A man (Greg Kinnear) and a woman (Rebecca Romijn-Stamos) treasure their 8-year-old son, and when he's tragically killed they are convinced by a brilliant research scientist (Robert De Niro) to have him cloned. But they don't realize the consequences of their decision: when their new son reaches the age when the first boy died, he changes and becomes violent. Also with Cameron Bright and Jenny Levine. Directed by Nick Hamm. [1:42]

SEX/NUDITY 5 - A man in boxer shorts and an open shirt (we see his bare chest) sits on a bed, his wife is in a tank top and panties (we see her bare abdomen, thighs and cleavage) climbs on his lap, they kiss, he removes her top (we see her bare back), she removes his (we see his bare chest), and they lie back on the bed kissing. A woman lying on a sofa says to her husband, "I have to do you" then grabs him, pulls him on top of her and they kiss. A man and a woman kiss. A woman wears a tank top that reveals cleavage, bare shoulders and bare back. A woman wears a low-cut top revealing cleavage. We see a woman on a surgical table with her feet in stirrups and a doctor with a device he uses to implant a fertilized egg (we see images of the cell removal and implantation on a computer screen).

VIOLENCE/GORE 6 - A boy walks into a city street to retrieve his ball, a bicyclist swerves onto the road causing a car to swerve, crash through a construction site and hit the boy (we see the boy's stunned face, the screen goes black, and then we see the parents grieving). A man is punched and shoved into a table, a candle is knocked over, a man is hit in the head with a heavy candlestick, he falls to the floor, blood glistens on the back of his head and blood trickles down his face, and the building begins to burn around him. We see many intense images of a boy's nightmares: he sees a boy with a decomposing face, children screaming and pounding on a door (a fire burns in the room they are in), a boy taunting him, and a boy raising a hatchet over a woman's head and bringing it down as she screams. A boy having a nightmare screams and hits his father a few times then collapses. A boy dreams that he goes into a dark shack and someone hits him with a hatchet. A boy hears noises while he leans over a stream, he turns around and we see his startled face as he is apparently hit with something (we see his body being fished out of the stream later and see his mother screaming in terror). A boy hears noises in a closet, opens the doors, sees nothing, he turns away and a decomposing hand grabs him and drags him into the closet. A boy rides his bike into a road and is nearly hit by an oncoming car. A boy hears noises while he is taking a bath, gets out of the tub, we see the shower curtain tear away from the rod and plunge in the tub (we see the face of a boy underneath the curtain), the boy reaches for the door knob and a decomposing hand grabs his wrist. A woman is frightened by a boy, the room they are in goes dark, she hears the sound of metal scraping (sounds like a knife), the boy hits her with something and then he runs out of the room. A woman walks through dark woods and into an abandoned shack, she walks through the darkness and someone raises a hatchet over her head, she turns and screams when someone else grabs the hatchet and saves her from injury. A woman talks about a boy's destructive and anti-social behavior and that she tried to murder him but could not go through with it (we see her pull a shower curtain down over him while he's bathing and see the boy struggle and hear him yell). A boy taunts other boys trying to make them walk into a fast-moving stream. A man walking through a dark alley is held at knife point, and then let go. A boy runs through dark woods, his father chases him, he finds him in an abandoned shack and he looks like he is in some sort of trance. A woman screams during delivery, a baby is born but does not breathe for some time and when we see the baby he is covered with goo and blood. A man collapses and sobs when he gets news of his son's death. A man grabs a man's hand and yells at him. We hear that a boy killed his mother with a hammer then set their house on fire where he also died. A bully shoves a boy and taunts him, the boy spits on him and other bullies, and jumps off a high-swinging swing and spits in the face of a teacher. Bullies make verbal threats, extorting lunch money. While driving a man skids and swerves and is nearly hit by an oncoming truck. A woman wakes with a start when a boy stands over her as she sleeps. A woman's darkroom has been vandalized: we see photographs torn and cut and slashed and equipment overturned. A man is startled when a boy grabs him from behind.

MESSAGE - Although the death of a loved one is painful, we must let go. 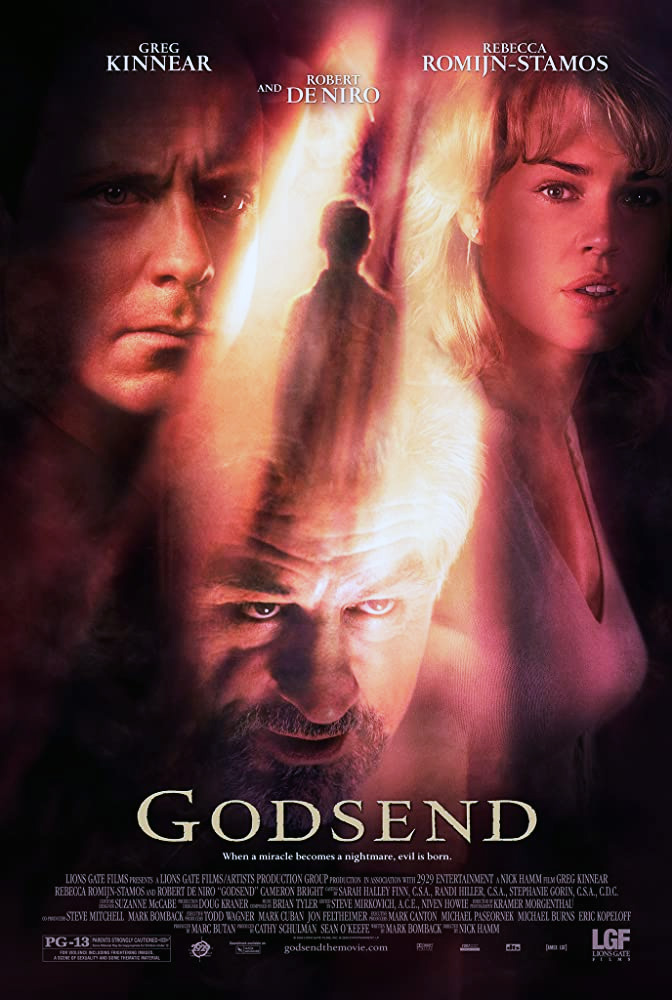