A self-obsessed, unfeeling cad (Matthew McConaughey) is visited by three ghosts on the eve of his younger brother's wedding. The ghosts attempt to show him what he is missing by divorcing all feeling and emotion from his relationships. Also with Jennifer Garner, Breckin Meyer, Lacey Chabert, Robert Forster, Anne Archer, Emma Stone, Michael Douglas, Amanda Walsh, Christa B. Allen, Rachel Boston, Camille Guaty and Noureen DeWulf. Directed by Mark Waters. [1:55]

SEX/NUDITY 6 - A man and a woman are shown lying in bed together after sex, we hear them breathing heavily, he gets out of bed (we see his bare back and chest and her bare shoulders), gets back in and they snuggle. A man lying on a sofa unzips a woman's dress (we see her bra, cleavage and bare abdomen) she straddles him, they kiss passionately and sex is implied. A teen girl and a teen boy kiss passionately, she pushes him through a door and they emerge in a few minutes (it is implied that they had sex and we hear they she was his first).
► A man approaches an older woman seated at a bar and caresses her clothed breast, says, "They are so real" and the two have a conversation about casual sex.
► A man enters his room, we see movement and moaning coming from under the bedcovers, he lies on the bed, pulls back the covers and finds a 16-year-old girl (he is shocked and gets up). A woman straddles a man lying on a sofa and they kiss. A man and a woman kiss in a few scenes. A man and a woman who have just been married kiss.
► A woman removes another woman's dress to prepare her for a photo shoot and we see her standing in her bra and panties (we see cleavage, bare abdomen and legs). Two women wearing only revealing undergarments ask a man to join them for dinner and he declines (we see cleavage, bare abdomens and thighs, and buttocks through a pair of sheer panties and a pair that rides high). Several women wearing only revealing under garments (cleavage, bare abdomens and thighs are seen) pose for a photographer who admires them before photographing them. Many women wear deeply cut tops and dresses that reveal cleavage throughout the movie. A man's shirt is unbuttoned and reveals part of his bare chest.
► A man moves close to a woman, wraps a scarf around her neck, pulls her toward him and tells her, "I'd be happy to take off the rest of my clothes"; she declines the offer and leaves. A man tells a woman that they should have a little dinner and a "little sex." A much older man asks a 16-year-old girl, "Let's get naked." A woman approaches a man in a bar and tells him that she would be interested in having sex with him. A man tells a woman to meet him in his bedroom and she goes (implying that they will have sex). Three women try to seduce a man (he declines). Teenage girls talk about a boy wanting to dance with a girl and that he'll "want to make out with tongue." A woman talks about dancing with a teen boy when she was younger and letting him "cup her bottom." Many women line up and address a man as he walks past them and each talks about their brief sexual relationship with him, referring to plane sex, very short relationships, etc. -- one is a man who used to be a woman. A woman makes a comment about a man having a "hot surface." We hear that a man had sex with a friend of his fiancée. A man talks about having had sex with all but one of the bridesmaids at his brother's wedding. A man talks about an evening he and a friend spent with "17 stewardess and a pile of blow." Many references are made to a man being "wedding sex" for a woman. Three women talk about a man with interest, they state that he is married, and one says that as long as he doesn't have children, he is not off limits. A woman makes a remark about her and a man having 20 years of foreplay. A man and a woman talk about "spooning and massages with clothes on" in a couple of scenes. A man talks about another man's "clothing optional orgies." A man talks about someone having sex with a total stranger in a bathroom. A man asks his teenage nephew if his girlfriend is pregnant, or has a sexually transmitted disease. A man makes a comment about a teenage boy becoming sexually aroused in a gym locker room. A man asks another man if his pick-up lines work on men. A man's personalized license plate reads "stabbin' wagon."
► Men and women dance together at a wedding rehearsal. Middle school aged boys and girls dance at a school dance and we see one couple kissing.

VIOLENCE/GORE 4 - A man punches another man in the stomach and he falls unconscious. A woman slams a man's head into a steering wheel (he's OK). A woman slaps a man in the face after he makes a sexual proposition. A woman slaps a man in the face.
► A man is pushed into an open grave and people begin shoveling dirt onto him. A man panics when he surrounded by many women who try to touch him and he yells.
► A man, who's a ghost, walks toward another man and passes through him. A 16-year-old girl pushes a man back and he trips and falls to the floor. A man rolls out of his bed and lands hard on the floor.
► A woman threatens to cut off a man's favorite appendage. A man and a woman argue after she finds out that he has been unfaithful. Two men argue. A woman screams at a man when she finds out that a layered cake has collapsed onto the floor and it was his fault. A woman yells in frustration when she realizes that a catered meal is not the way she ordered it.
► A woman poses for a photograph with an apple on her head and another woman with a bow and arrow shoots (we see a photo of the apple breaking apart and the woman screaming).
► We hear that a man's parents were killed in a car accident. A man describes a wounded soldier by saying that his "insides were out of him" and that they were "warm and mushy." A man breaks up with three women during a conference call. A man makes a speech against marriage and love and says they leave you weak and dependant and that love is a myth. A teenage boy tells his uncle that he feels like he wants to throw up and that he hates girls.
► A man drives recklessly through a snow-covered forest and down a hill, he jumps out of the car and the car crashes into a lake. A man yells and runs out when he hears a woman's voice coming from under his bed covers.
► A man urinates in a urinal (we hear stream).

SUBSTANCE USE - A man talks about an evening he and a friend spent with "17 stewardesses and a pile of blow." People drink shots of alcohol and champagne at a rehearsal dinner, a man drinks several alcoholic beverages without eating and appears drunk, people drink alcohol in several bar scenes, a teen boy drinks alcohol at a bar with his uncle, four women drink martinis, a man guzzles champagne from the bottle, people drink a toast at a wedding, a man and a woman drink alcohol at a bar and a man talks about another man drinking alcohol from a bidet.

MESSAGE - Life without feelings leads to emptiness and loneliness. Love is a risk, but it's worth it. 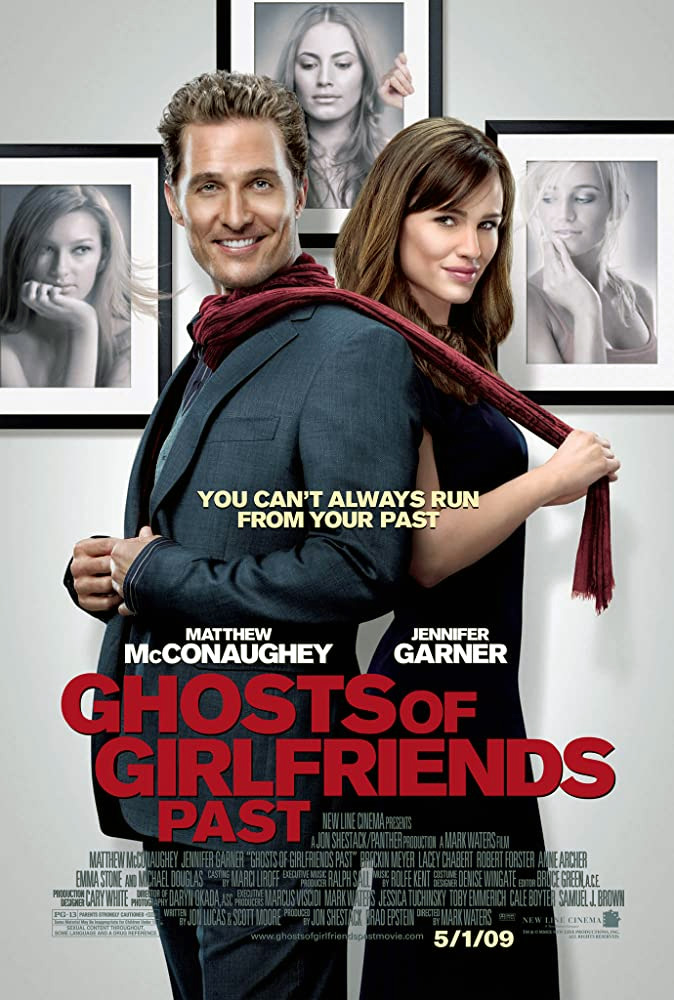