In a remote region of the Bering Sea, a boat salvage crew discovers the eerie remains of a grand passenger liner thought lost for more than 40 years. Once onboard, the crew must confront the ship's horrific past and fight for their lives. With Julianna Margulies, Gabriel Byrne, Isaiah Washington, Ron Eldard and Desmond Harrington. [1:31]

SEX/NUDITY 5 - A woman walks toward a man and asks him to dance (in Italian): her dress is slit up to just below her buttocks, she kisses him on the cheek and they kiss. A man and woman also kiss. A woman walks away from a man while unzipping her dress, she lets it fall to her waist and we see her bare breasts, she steps out of her dress and we see her bare breasts again, as well as her bare back and we hear the man unzip his pants as he approaches her. A woman wears a strapless gown that exposes cleavage and bare back and shoulders, while she sings seductively on a stage (we see her singing a couple of times). We see women in evening gowns in a couple of scenes, dancing in a formal setting. There are large paintings of nude women.

VIOLENCE/GORE 9 - A cable is pulled taut and literally runs through a crowd of people leaving everything silent for a moment until we begin to see blood pouring from the people's wounds, torsos being separated, heads sliding off necks, half of a face and head slipping to the floor, and people writhing in pools of blood (we hear lots of squishy sounds). A woman separated at the waist reaches for her bottom half and tries to drag it close to her, people gasp and sputter and a little girl (she's in one piece) screams in terror. We see a flashback and watch people vomiting and foaming at the mouth after they have been poisoned. We watch as people are gunned down as they run through hallways, and we watch people being gunned down and fall back into a swimming pool full of other dead bodies. A man is stabbed in the throat, dead bodies lie in pools of blood in a kitchen, and a little girl is taken into a room by two men. A woman is hit in the chin by a large hook that pulls her up in the air: we see her blood-covered face, and watch her feet kick as a man burns a brand onto her palm. A man under water is pulled into a rotor, we see him jerking as he goes through, see blood fill a tube of water and see his separated body parts. A man shoots many men in a room, and a woman shoots a man in the head. A man shoots a man in the chest (we see him with a large bloody wound on his chest). A tugboat explodes sending one man flying through the air in flames, and another man falls off the side in flames: two men are pulled from the water (one has a bloody wound on his head) and we hear that another man died in the blast. We see a man floating dead in water. A man grabs at a woman but falls down a shaft landing with a thud (we see him lying dead, with heavy cables poking through his chest and a blood-soaked shirt). A woman opens a door, water pours out knocking her and a man over, and they discover dead bodies floating in the water near them (we see the scarred faces of a couple of the dead men). We see a man with a burned and bloody face in a couple of scenes. A woman is hit in the head with a pipe, she falls back into water, a man holds her under, she stabs him in the leg with a spear gun, then points it at him and fires, hitting the trigger to set off explosives that blow up a ship (we see a man in silhouette being blown to pieces). A man attacks a woman punching her and kicking her and throwing her into a wall; he imagines that the woman is a man with a knife and another man knocks him out with a blow to the head (we see the man later with a bloody head and he is dropped into a hold). A man punches a man in the nose. A woman finds an empty swimming pool riddled with bullet holes, shell casings lie around the floor, and as she walks away, blood pours from the holes and the pool fills with blood. A man falls through the floor and his hand is grabbed by a woman who struggles to get him back up. A salvage tugboat runs into a luxury liner tossing a man off the bow, but he grabs hold of a rope and dangles. A woman walks into a storage closet in the ship's galley, two cloth bags begin to move and chase her (it turns out to be her crewmates playing a joke on her). A woman jumps when she sees a skeleton dangling from a rope. We see a dead bird. A woman kicks open a box and rats pour out of it. Two men eat what they think is a tin of pork and beans but they end up with mouths full of maggots. A man finds a bloodstained sink with a straight razor in it. A woman sees a little girl in several scenes, is startled by her a couple of times, and she determines that the girl is a ghost when she tries to put a locket in her hand and it falls through. A little girl (a ghost) screams in fear of someone who is threatening her (we don't see anything). Cabin doors slam shut in order down a hallway, where a woman is standing. A man jumps when a grandfather clock chimes loudly as he reaches for it, and a man jumps when he sees another man in the reflection of a mirror instead of his own. People are unnerved when they hear a strange voice coming over a radio. We watch ethereal forms floating in water and then in the sky. We see a small part of a Bruce Lee movie on a TV: he is fighting with many other men. A salvage tugboat is almost pulled under water when the ship it is towing begins to flood, but a woman and two men dive into the flooded compartment and close it up. People talk about there having been no survivors when a ship disappeared in the Arctic Straight in 1962. People talk about a similar fate for the infamous Mary Celeste.

SUBSTANCE USE - People are shown smoking cigarettes and drinking alcohol. There is a veiled reference to a man having had an alcohol problem.

MESSAGE - Greed will get you nowhere but dead. 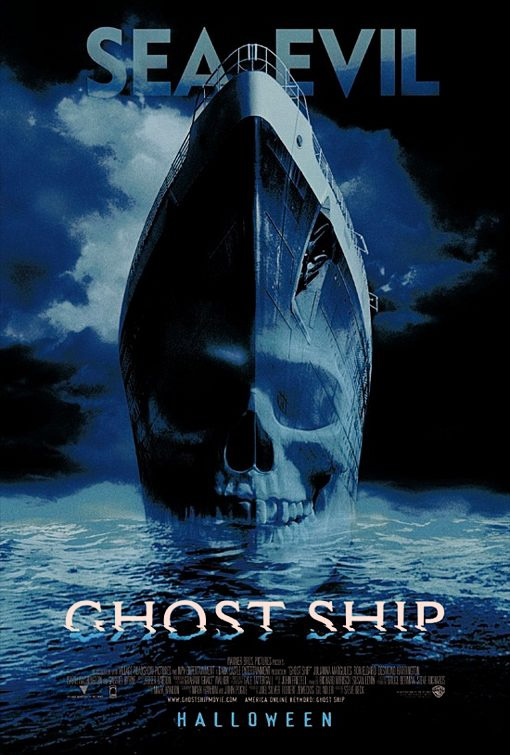