Nicolas Cage stars as a motorcycle stuntman who sells his soul to the devil (Peter Fonda) in order to save his father's life, and years later the devil re-enters his life and tells him he must pay by becoming the Ghost Rider and destroying the devil's own son. Based on the Marvel comic series. Also with Wes Bentley, Eva Mendes, Matthew Long, Donal Logue and Sam Elliott. Directed by Mark Steven Johnson. [1:54]

SEX/NUDITY 3 - A young man and a young woman kiss, and a man and a woman kiss in several scenes.
► A woman wears extremely low-cut tops and dresses that reveal deep cleavage in many scenes, a young woman wears a low-cut dress that reveals cleavage, and many women in stadium crowds wear low-cut tops that reveal cleavage. A man is shown bare-chested with a towel around his waist after showering.
► A man says to another man, "you could use a woman's touch."

VIOLENCE/GORE 7 - There are four demons: Air, Water and Earth, as well as "Black Heart" or the son of the devil, and they each have large very pointed teeth, misshapen and discolored eyes and utilize loud screeches or growls: Many people are killed by a demon angel who freezes them when he touches them: they turn blue, their eyes sink into their heads, and they die.
► When a man first becomes the Ghost Rider we see an extended scene where he begins to smolder, his shoes burst into flames, his eyes smoke, his face and head burn and the man screams (we see the skin begin to burn off and eventually he is left with a clean skull).
► A demon is shot repeatedly, his head is shot off (it grows back), he is shot again and he splatters into many small tar-looking fragments that begin to slither and writhe back toward his spinal column.
► The Ghost Rider uses his stare to make people who committed crimes see the pain that they have caused their victims: we see many acts of violence flashing across the screen that involve knives, gunshots, yelling, and the pained faces of the victims (we see the perpetrators afterward with charred and glowing eyes).
► A demon throws the Ghost Rider into a chain that wraps around his throat: he is still for a moment but comes back, and uses the chain to strike the demon, tries to walk through a puddle and is grabbed by another demon who holds him until he is crushed against a train by a truck (we see smoldering).
► A demon is wrapped with a flaming chain, he begins to burn, and he cracks and drops to the ground, looking like a smoldering pile of rubble. A demon is caught in a swirling, flaming chain that crushes and burns him (we hear him scream and see him breaking up).
► A demon pulls the Ghost Rider into water, they struggle, and the Ghost Rider bursts into flames causing the demon to boil and burst into rubble (we hear him scream and flail and see the remains). A demon is struck several times with flaming bits of rock (he is slowed down but recovers).
► A demon touches several people in a bar and kills them by freezing them (we see the blue-tinged corpses). The devil touches a young man's chest and he begins to smolder and glow and his eyes smoke.
► Many angry spirits soar through the air and push their way into the mouth of a demon; he thrashes and appears frightened and when they are all finished he has glowing red eyes, pointed teeth and bits of horn poking through his skin.
► The Ghost Rider falls off a motorcycle, and he screams as the fire begins to go out and his skin begins to grow back. The Ghost Rider is shot many times by police (we see molten holes open in his body but he walks away from the encounter). A police officer strikes the Ghost Rider across the face with a club, his jaw snaps, but he pushes it back into place and we hear a snap.
► A man is locked into a jail cell with many criminals, he is attacked by all of them (they punch and kick him), he bursts into flames and becomes the Ghost Rider and the men are thrown through the air and lie on the ground unconscious.
► Fire falls from the sky, lightning flashes, and a man appears in the desert: he screeches and flashes a large mouth filled with very pointed teeth and very black eyes. The devil walks along a road and the streetlights blow out.
► When lightning flashes in a few scenes we see beneath people's skin and large pointed teeth and skulls are visible. A man's head and hands burst into flames and he rides away on horseback leaving flaming hoof prints on the ground. A lizard bursts into flames as the Ghost Rider speeds by.
► A man stitches up a wound on another man's shoulder (we see the large gash and see the needle pass through the skin).
► A woman is thrown hard into a wall and she falls unconscious. A man strikes a boy hard across the face. A man holds a blade to a woman's throat and threatens to kill her if she doesn't give him her purse.
► A man rides his motorcycle next to a van on a highway, and he does stunts and moves around the van trying to get a woman's attention; he is nearly struck by two oncoming trucks, he stops in the middle of the road and is then nearly struck by the van. The Ghost Rider speeds on a motorcycle leaving a trail of flames, and as he passes by cars explode and windows of buildings blow out and trees catch on fire. The Ghost Rider rides his motorcycle up the side of a building, then down the side of a building.
► A man jumps his motorcycle over many trucks, he lands badly, he flips over the motorcycle, he cracks his head on the front tire, we see his neck snap back, and he slides along track and slams into the wall (he's OK). A man jumps his motorcycle over many helicopters with blades whirring, and survives.
► A man crashes his motorcycle while doing a ring-of-fire stunt and he dies (his son grieves over him). A man and a young man jump their motorcycles through a ring of fire (both are OK).
► We hear about a town where greed got the better of the inhabitants and they killed each other and the "town drowned in its own blood." Police talk about a Biker bar massacre.
► A man suffers from lung cancer, and a drop of a young man's blood falls on a piece of paper.
► A man drinks coffee from a hot pot, and a man spits chewing tobacco juice on the ground in a few scenes.

SUBSTANCE USE - People in a stadium audience drink beer, and a woman drinks a lot of wine in a restaurant. A man smokes cigarettes in several scenes and we hear that he is dying from lung cancer, a man spits chewing tobacco juice in several scenes, and a man tries to light a cigarette. A man sleeps in a chair next to an open and partially empty bottle of whiskey and an ashtray full of cigarette butts.

MESSAGE - You cannot live in fear. Sacrificing for loved ones is the noblest cause for any action. 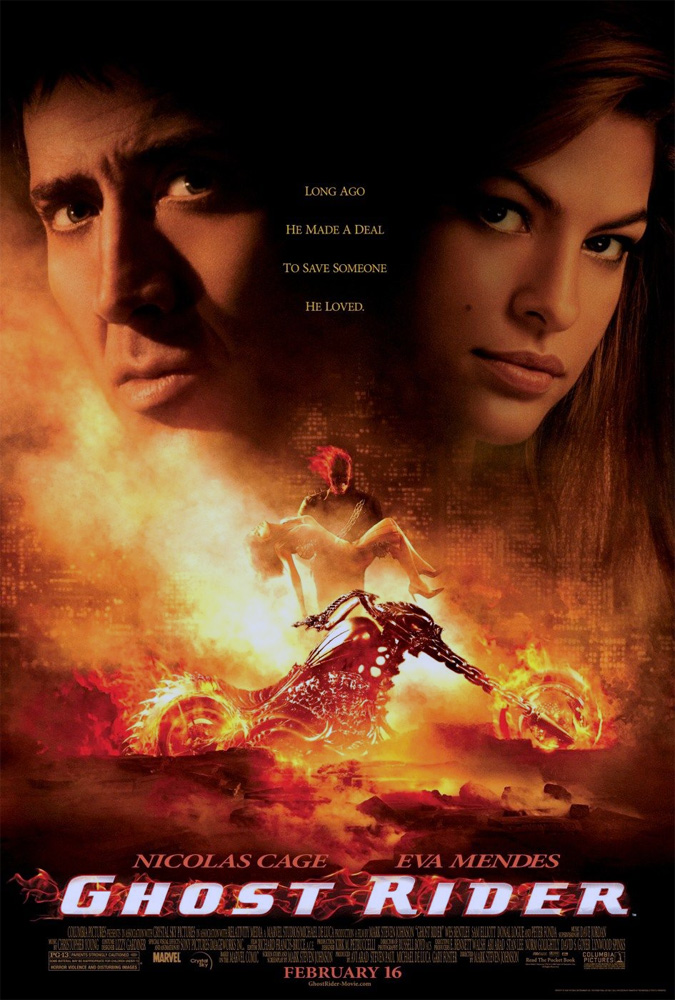