Japanese anime film set in 2032: A detective investigates several strange murders committed by female cyborgs that were created specifically to provide sexual companionship but ended up killing their owners. With the voices of Atsuko Tanaka, Akio Otsuka, Tamio Oki, Koichi Yamadera and Yoshiko Sakakibara. Directed by Mamoru Oshii. In Japanese with English subtitles. [1:39]

SEX/NUDITY 5 - Please note that all the characters are animated: Two female cyborgs are built, they float around in a liquid, we see their bare buttocks, they come close to each other and appear to almost kiss. A man and a woman talk about a cyborg being a "sexoid." We see many female cyborgs with no clothing -- they're revealing only the most rudimentary female form. A female cyborg's robe falls open revealing her bare abdomen, cleavage and crotch.

VIOLENCE/GORE 7 - Please note that all the characters are animated, many of the characters are cyborgs interspersed with humans, and when the cyborgs are injured or killed they bleed just as a human would: We see the remains of a body with its head missing, sitting on the ground with blood and matter splattered on the wall behind and around it. We see a body with a huge hole in its stomach. Many people pull guns on a male cyborg, he shoots them all, we see many bloody bullet holes, others come with guns and swords, there is more fighting, many bodies fall to the floor, and blood flows on the face of one victim (there are some cyborg victims and some human victims). A man is shot in the chest (we see a bloody spot), we hear an electrical charge and a male cyborg gasps. Many female cyborgs fight with a man and a male cyborg: one female cyborg is shot repeatedly and her chest cavity opens, she continues kicking, and many men are shot (blood spurts). The female cyborgs continue attacking with punches and kicks, their faces break away, their chest cavities open, we see blood splatter, and a man and a male cyborg turn and point guns at each other. A man is shot in the arm and then bullets hit all around him. Two big cyborgs fight: one has a blade attachment on his arm, one cuts the other's arm off (we see it flop to the floor), and one punches into the other's head and pulls out his inner mechanisms. A male and a female cyborg fight, he slams her into a wall, she twitches, she pulls at her skin tearing it open and revealing machinery inside: her face opens and we see a metallic framework, and then she is still. A male cyborg is shot twice in the arm, he shoots back, and he is held with a gun to the back of his head. A male cyborg attached to cables is jolted (we see scorch marks on the back of his head). A man and a male cyborg walk through a building with guns drawn, and we see a body that appears dead. A male cyborg jumps into water and grabs onto a passing vessel. A large explosion blows out a window, and many guns are fired from a boat. A male cyborg jumps and crashes through many walkways. A huge fire burns and we see cyborg heads and faces in the embers. Two grenades explode throwing people into the air. A female cyborg has a tube attached to her eye socket, and we hear that she was shot. We hear that a man and two police officers were murdered. A car drives through a street where people are walking to a crime scene and where people are crowded around. We hear about people being kidnapped, and we hear about a crime over a radio. A man kicks a garbage can in anger. We see a bloody handprint on a mirror. We see cyborg eyeballs floating in liquid. A human is removed from some sort of a cage. Children tussle over sweet treats.

MESSAGE - Stay in touch with your life. 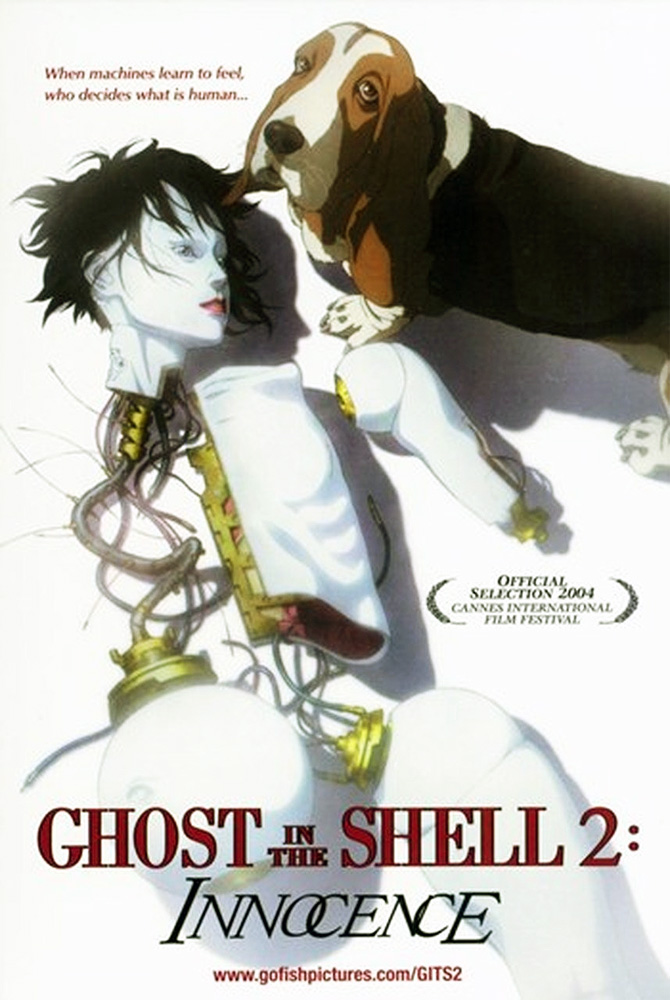