A real estate developer (Brendan Fraser) moves his family to the Oregon wilderness and is given the task to develop the woodlands into a new suburb. However, the forest animals have other plans. Also with Brooke Shields, Ken Jeong, Angela Kinsey, Dick Van Dyke, Samantha Bee and Matt Prokop. Directed by Roger Kumble. [1:32]

SEX/NUDITY 2 - A man and a woman kiss one another on the cheek and lips. A teenage boy and a teenage girl are interrupted, as they are about to kiss.
► A man is seen in a bathtub (his bare chest and bare back are visible), he mistakenly pulls a woman's bra onto his chest and stands up, allowing himself to be seen through the window by a group of men who laugh as the man stumbles backward, trying to hide.
► A shirtless man is seen covered in mud and a shirtless man is seen momentarily standing beside another man, as he sits on the cover of a hot tub. During a dance scene, a teenage boy is seen dancing while wearing underpants and a shirt. A woman's bare mid-drift is seen as she dances. A woman wears a bathing suit. The bare mid-drift of a man is visible when he wears a tight-fitting woman's jogging suit.
► A man and a woman lay side-by-side in bed (fully clothed), and the woman's arm is around the man's shoulder.
► A man jokes that he has been hit in the "No no zone."

VIOLENCE/GORE 4 - On two occasions a large boulder is purposely rolled down a hill by animals, causing a person driving down the road to come to a screeching halt: in the first instance, the car dangles over the side of a large cliff until a raccoon throws a lit cigar into the car, causing the driver to tip his weight and the car falls to the ground with a crash (the driver is not seen, but his voice is heard and he sounds unharmed); in the second instance the driver stops the car, narrowly avoiding being hit by the boulder, the airbags are deployed, causing him to splash a cup of hot coffee on his face, and he then gets out of the car and walks to the edge of a cliff, only to fall moments later (he is later seen with torn clothing but not injured).
► While running from a bear, a man locks himself in a Port-A-Potty: the bear begins to rock the Port-A-Potty, causing the man's pants to rip off (he is seen in his underpants), the Port-A-Potty tips, and liquid pours all over the man, who shouts; we see the Port-A-Potty later lodged up in a tree, it falls to the ground, two men open the door and it is implied the man inside is covered in feces (we do not see the man until he has been hosed down and begins to run down the street in a shirt and underpants).
► On two occasions a man loses control of his car after being sprayed by a skunk, he crashes into a stack of pipes, a group of men race to help him, and he appears pale and sick from the skunk spray. A man is chased by a buzzard, he leaps into a bush for protection, only to be stung by bees; we see the man later with his face covered in hives and eyes completely swollen shut; he appears to recover a few hours later.
► A raccoon punches a man in the face on multiple occasions; the raccoon also shoves its paws into the man's mouth and urinates onto the man's face (we see a stream of urine hitting the man's face).
► A ferret drives a car through a crowded festival with a man tied to the top (he's getting struck in the face with tree branches), and the car comes to an abrupt stop, sending the man sailing off and to the ground. Animals pour out of a car and begin to chase and terrorize a group of humans: large birds defecate on a woman, a man is trapped in a bouncy slide, skunks spray a woman, and a ferret hits a person in the face.
► There are multiple instances of accidental violence: a man shoves a woman as he opens a car door; a man falls while walking along a roofline, appearing to injure his genitals as a bird approaches him and begins to peck at his face, and he falls onto the cover of a hot tub and passes out; a man knocks himself in the back of the head when putting his head out an open window; a man shouts, waking up a woman who rolls out of bed and onto the floor with a thud; after his treadmill is unexpectedly unplugged by a raccoon, a man flies off, knocking himself into a wall, and causing a television set to fall on him with a crash; a man is in pain after accidentally biting into an acorn; a man is accidentally shot in the crotch with a stream of water from a sprinkler; a woman falls off a porch after being hit in the face with a large meat patty launched from a booby trap; a man dramatically hits his head against a table; a man is accidentally shot by a tranquilizer gun, causing him to fall the ground; and two men narrowly avoid being hit by a stack of falling lumber and a swinging chainsaw (they both act unfazed).
► A man shoots two animals with tranquilizer guns as he reassures another man that the animals are simply sleeping and are not dead; and a group of people are seen carrying tranquilized animals and herding animals into large cages.
► Two men discuss blowing up a beaver dam; one of the men jokes that he will make it look "like an accident," and we later hear a giant explosion and a man shouts that the dam has been destroyed, but not to worry because the beavers were not harmed.
► A man attempts to terrorize a group of animals, including setting out multiple humane and non-humane animal traps, and then finally hunting down a raccoon and aiming a tranquilizer gun at it (he does not shoot).
► A man shouts at a woman, and a teenage boy shouts at a man. A man makes a crude joke that another man had been murdered by a woman and chopped into tiny pieces. A teenage boy shows a man a picture of a man with a snake on his chest, and the teenage boy tells the man that he fears he will be poisoned by a snake, just like the man in the photograph. A woman tells another woman that her beloved cow had died many years earlier.
► A man dreams that animals are throwing plates at him, he then imagines waking up only to find a woman wearing a raccoon mask; the man begins to scream and eventually wakes up, unharmed, but shaken.

SUBSTANCE USE - A man is briefly seen smoking a cigar.

MESSAGE - Everyone must do their part to protect the environment. 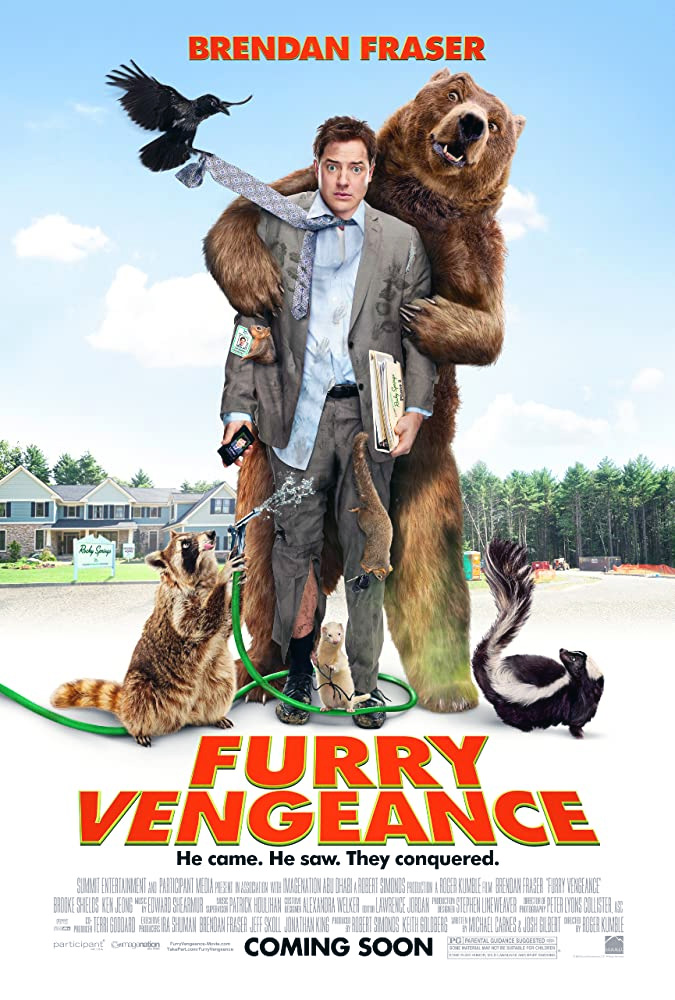