This third installment in the "Friday" series takes place during the holiday season: Although cousins Craig (Ice Cube) and Day-Day (Mike Epps) live in a rundown apartment they are full of Christmas cheer, until a Santa Claus breaks in and steals all their stuff, including the rent money. Faced with eviction, they get jobs in a strip mall as unarmed security guards. Also with John Witherspoon, Don "D.C." Curry and Anna Maria Horsford. [1:25]

SEX/NUDITY 5 - A man admires another man and follows him into the bathroom (the man is urinating and we see the side of his bare buttocks and his pants around his ankles); there, he proceeds to drop his pants and approach the urinating man in order to rape him please see the Violence/Gore category for more details. A woman tries to seduce a man: she lies on a sofa in a negligee, sticks her tongue out suggestively, grabs his crotch and pulls him on top of her. A man invites a woman into his bedroom, they sit on his bed and he leans in for a kiss, but they are interrupted. Two women and a man are shown in bed together (the man is bare chested) and we see some movement under the sheets (suggesting that the women are caressing the man). A man licks a woman's cleavage. A man watches a music TV show and acts aroused when a male singer performs (we see the man dancing and thrusting his hips while watching). A man masturbates (we see his arm moving underneath a pillow) and is interrupted. A man parades three women (they make suggestive gestures toward the man) in front of a man and they are wearing outfits that reveal part of a bare breast, cleavage, bare abdomens and shoulders. A man and a woman flirt in a few scenes and a man and a woman look at each other with interest. People dance close to each other at a party, with some gyrating hips and thrusting. A woman sticks out her tongue seductively, and a man grabs his crotch. A woman wears tight-fitting tops that expose cleavage, a woman wears a dress that exposes part of her bare breast, and a woman wears tight pants and a slinky top that exposes bare abdomen, shoulders and back. We see a quick glimpse of a pornographic magazine and the woman on the cover has her arms folded over her bare breasts. We see a bare-chested man a few times; once he's in boxer shorts. Sexual innuendo includes: A woman threatens two men that they will have their "salads tossed" by her son, and a man says he "got an early Christmas present" from a woman.

VIOLENCE/GORE 5 - A man approaches another man apparently to rape him but the other man finds a pair of vice grips and attaches them to the man's crotch; an extended torture scene follows with the man tightening the grips and the other man screaming. A man breaks into another man's house, a fight breaks out, one man tackles the other to the ground and punches him repeatedly, then they switch places and the other man punches him repeatedly. One man is hit repeatedly with a decorated Christmas tree until he is nearly unconscious. Two men jump on and punch another man repeatedly. Two men shove, threaten and punch a man in the nose (we see the man with a bloody face and nose later, after he was apparently beaten some more). Two men beat another man with a Christmas tree, the man gets away and the other men chase him, he runs into a wall head first, breaks through a window and runs, gets clotheslined in the throat and thrown to the ground, he runs through yards, gets shot at by a man with a shot gun, and runs through houses. People chase the two men following him with pool cues, hit them with the cues and canes, and one man is trapped in a room with thugs who beat him up and throw him out a window; he crashes to the ground, gets up and runs and is hit by a car: it's a limousine, and he flips over the hood and rolls along the very long roof and crashes to the ground. We see a man with a bloody, swollen face tied to a sleigh on a rooftop. A man shoots up the inside of a house with a shotgun. A dog bites a woman on the buttocks and she screams. A man shoves another man who falls on the floor and is pinned under a mannequin. A man slaps a woman in the face and she falls to the ground (we see her bruised cheek later). A man spanks two young men repeatedly. Two men grab a man and a woman and hold them as they struggle to get away (security officers hold shoplifters). Two men shove each other and yell when they both want to dance with the same woman. A woman hits another woman a few times when she finds her trying to seduce her husband. A man hugs two men violently with their heads pinned under his arms. A man with a bag wrapped around his hand (to look like a gun) holds up three men and steals one man's watch and runs; the three men begin to chase him. A man comes toward another man and a woman threatening them with a straight razor. Two men jump from a roof onto a car. A group of men chase two other men and they run through alleys, over walls, through gates, over walls and hide on the roof. Two men slap each other in the face three or four times each. A man falls on the floor of a store pretending to be having a seizure while his companion is shoplifting. A man shoves another man twice (he ends up falling to the ground) and a boy kicks a man in the buttocks. A woman slaps the back of a man's head. A woman yells at and threatens two men, and they yell back. People yell at and speak abusively to each other throughout the movie. A man hits a dumpster and startles two men sitting behind it. A donut shop buzzes with flies and a man kills one on the window. A man sits on a toilet and flatulates, a man flatulates and it is suggested that he soiled himself. During the opening credits a cartoon character gets shot by another cartoon character and is chased by a dog.

SUBSTANCE USE - People are shown drinking alcohol to the point of inebriation and smoking tobacco and marijuana. There are a few references to crack, but no obvious use. Marijuana references include: The Hollywood sign reads "Hollyweed," two men have a marijuana plant growing in their apartment, and a cartoon man smokes a marijuana cigarette.

MESSAGE - Not all Fridays are bad. Things have a way of turning around, if you keep a positive attitude. 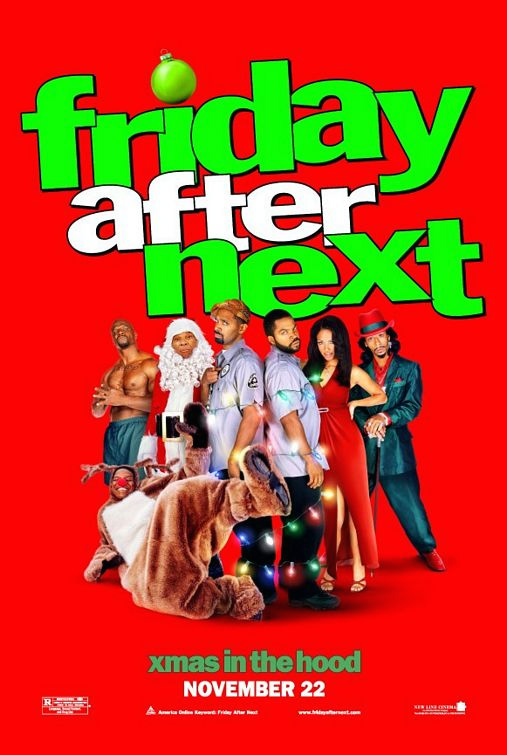