A.E.W. Mason's adventure novel has been made into a movie several times, most notably in 1939. Set in 1898, at the height of Imperial Britain, an officer (Heath Ledger) resigns his command to avoid going with his regiment to the Sudan. Offended by his act of cowardice, his fellow officers and his fiancée send him four white feathers. To redeem his honor, he disguises himself as an Arab and secretly saves the lives of the very people who branded him a coward. Also with Wes Bentley, Kate Hudson, Djimon Hounsou and Michael Sheen. [2:07]

SEX/NUDITY 4 - A woman moans and writhes while a man apparently performs oral sex on her, we then see him lie on top of her and they kiss and caress each other. A man and a woman kiss romantically several times and in several different scenes. A man talks about being paid for bringing prostitutes to British soldiers. Men are shown in a locker room with towels wrapped around their waists, showing their bare chests; they proceed to drop their towels and we see their bare buttocks. We see dead men with bloody wounds who have been stripped of their clothing (no genitals are exposed). Some men are shown bare-chested throughout the film. A woman belly dances and her outfit reveals cleavage and her bare abdomen. Men and women dance together and a man and a woman hold hands.

VIOLENCE/GORE 6 - A man is shot repeatedly by friendly fire. A man shoots another man who will not drop his weapon and he falls back onto the ground dead (we see a bit of blood on his clothing). A man is shot, falls off his camel and several others are then shot. Soldiers take aim at a group of men on horseback, they fire, some men are hit, they fire again and again until all of the horsemen are dead (we hear someone say "they are unarmed"). Soldiers scramble to form a square to defend against an attack; they fire on the enemy coming from every direction and we see people from both sides being killed by gunfire, slashed by swords, and stabbed by bayonets. Several soldiers are attacked by men popping out from under the sand and slashing at their horses, causing them to fall to the ground and throw their riders off; the men then fight with swords and bayonets. A man shoots a man and his companion. A woman pounds a man with a rock and apparently kills him (we hear the crunching, but they are behind a rock formation). We see two men being hung and hear the clunk of the platform opening out from under their feet. Three men are shot at as they run; one appears to have been hit and he and the man he is carrying fall and tumble down a hill; another man points his gun at one of them as they are lying on the ground. A man is tackled, punched and kicked repeatedly, and his face is shoved in sand; he's thrown onto the ground, he headbutts his attacker and then stabs and kills him with a bone. Soldiers ride up on a pile of dead bodies that are being devoured by wild dogs; we see a disembodied head separate from the pile -- one soldier fires his gun and chases the dogs off. We see a dead man lying on the ground with a very bloody, gaping slit along his throat. After a battle, we see bloody, twisted bodies strewn around. A wagon full of dead bodies is unloaded into a ditch full of other dead bodies. We see a fort that has been overrun and is strewn with dead and bloody bodies; several men hang by the neck, and many men with bloody wounds are dragged around. A man fires his gun, it backfires and explodes in his face leaving him badly burned (we see his charred, bloody skin) and blind. A man is shot in the back as he runs away. A woman is whipped repeatedly on the back for being disrespectful, a man is whipped repeatedly while dragging a heavy cannon, and a man is whipped repeatedly while tied to a post. A man hits a man on the head with a rock and he falls unconscious (we see some blood on his head and the rock). A man cuts a hole in the side of his camel and drinks some of the blood (we see some drip and trickle onto the ground). A soldier shoots at men whom he believes are deserting. A cannon being pulled up an incline by men breaks loose and rolls down knocking a man off his feet. Men play rugby and tackle, punch, elbow and kick each other (some end up with bloody noses and cuts on their faces). A man is thrown into a prison cell that is literally packed with other men walking en masse in a circle, he is punched in the face and falls out of view. A man shoves another man and threatens him. Men practice battle techniques on horseback (with swords) and on the ground (with bayonets); the stabbings make crunching noises. Boys throw stones at soldiers. A man spits water on a man's face. Tribal men and women have markings on their faces. A man falls to the ground quivering and appears ill. Men fight over scraps of food and one man is kicked hard in the stomach. A man talks about someone having had his "head lopped off." A man disavows his son. A man, dehydrated from riding through the desert, falls off his camel and is dragged for a short distance by the rope tied around his waist. Men ride in sand storms.

LANGUAGE 2 - A man says what sounds like "fu" and could be construed as an obscenity, 5 mild obscenities, 3 religious exclamations and some name-calling.

MESSAGE - We must temper our pride and self-righteousness. Face your fears.

(Note: There are references to people being good "Christian soldiers." There are discussions about the British wanting to "...civilize native tribes with Christian values.") 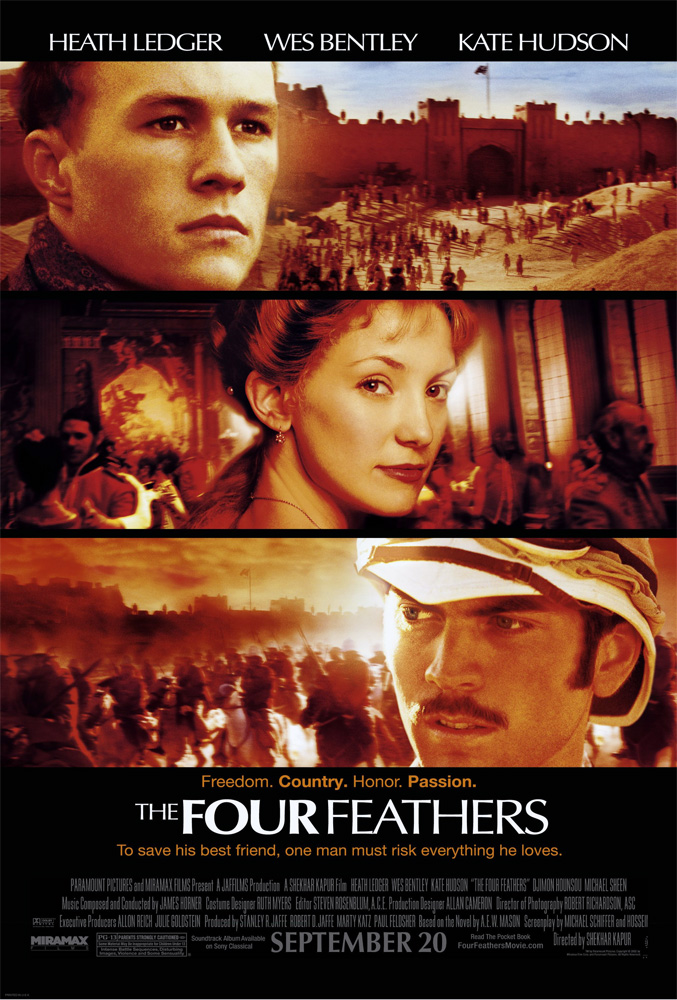