After being dumped by his TV star girlfriend (Kristen Bell), a man (Jason Segel) decides to take a trip to Hawaii to cheer himself up. But upon arrival to the island he learns that his former girlfriend is also in Hawaii and staying at the same hotel with her new rock star boyfriend (Russell Brand). Also with Mila Kunis and Bill Hader. Directed by Nicholas Stoller. [1:52]

SEX/NUDITY 10 - In several scenes we see couples engaged in sexual intercourse: we see several different sexual positions, we see them thrusting up and down, and hear them grunting and making other noises and we also hear their explicit sexual talk during intercourse; we see a man and woman having sex in several different positions, and we see a woman on top of a man making very loud sexual noises as she moves back and forth (she has a T-shirt on).
► We see one man in several sex scenes with several different women: we see him thrusting under covers, and there's no nudity. A man and woman kiss passionately, grope one another and begin to pull each other's clothes off; no nudity is seen, and we see them in bed under the covers and we hear sexual sounds.
► We see a woman put her head under covers and prepare to perform oral sex on a man, and in another scene we see a woman kneeling before a man and performing oral sex on him (we do not see the actual act, but we see the man's reaction and we see her head moving).
► We see a man's bare chest as he takes a shower, he steps out of the shower with towel tied around his waist, the towel drops and he is seen fully nude, including his genitals; his genitals are shown several more times throughout the movie.
► In several scenes we see a woman lying on top of a man and a man lying on top of a woman; in some scenes they are fully clothed and in some scenes they are naked. In several scenes we see a man and woman lying nude in bed (the covers are pulled over them and it is implied that they have just had sex).
► We see a man kiss a nun on the lips and then with his hand around the nun's waist thrusting against her from behind (the nun is fully clothed in robes). A man teaches another man how to have sex on a public beach (their clothes are on; we see them acting out several sexual positions and making sounds as if having sex).
► We see a framed photo of a man with a woman lying across his lap, her dress is pulled up revealing her bare buttocks and the man's hand is raised in the air about to slap her buttocks. We see several photos of women exposing their bare breasts posted on a wall in a men's bathroom, and we see men looking at the photos as they urinate (we do not see the men urinate, but see them standing at the urinals).
► We see a naked man hug a woman (the woman is fully dressed and we see the man's bare buttocks). We see a man's bare chest and we see him flexing his pectorals one side at a time. We see a man in tight shorts lying on a surfboard (we can see the outline of his genitals). In several scenes we see women wearing low-cut tops that expose cleavage, we see women in bikinis and bathing suits exposing bare arms, legs, abdomens and thighs, and we see women in several scenes dressed in short shorts and tight-fitting dresses. We see women in grass skirts and we can see their bare legs as they dance and move their hips.
► A man sings a song titled "Inside of You" and gyrates and moves his body in very sexual ways and imitates sexual positions while on stage. A man pulls a whole banana with two cherries on the end out of a mixed drink and puts it in his mouth (there is a sexual reference as to what it looks like). In several scenes we see a man dancing, winding, gyrating and pumping his pelvis and we also see the man dance with his legs open emulating sexual positions.
► We see a man kiss another man on the lips. We see men hugging one another in several scenes and in one scene two men are lying in bed next to each other, fully dressed.
► A doctor examines a man's genitals and comments that they are very nice. A man states that he is "sexually confident" and believes that he can sleep with any woman, any time and in any place, and he sees a woman and says, "I'm about to sleep with her." A man asks two women over and over again if they "want to go home with him" (presumably to have sex). A man says, "put your P in a V" and "put your L on some Ts" (the actual words are not used). A reference is made to using condoms. Two references are made to sexually transmitted diseases, specifically herpes and genital warts. A man makes a crude remark about the color of a woman's pubic hair. A reference is made to women showing a part of their anatomy. A man says he slept with the housekeeper. A man is said to have had a "dirty one night stand." A reference is made to masturbating. A man wants to see turtles have sex and says that they have sex for three hours. A man accuses a woman of "faking her orgasm."
► We see a man scratching his groin area.

VIOLENCE/GORE 4 - We see a man with coral sticking out of his leg, a gush of blood comes out of the wound, and another man faints at the sight.
► We see a man stab and kill a pig with a large knife and then we see that pig strapped to a stake ready to be roasted for a party (we do not see any blood, but we hear the pig squealing loudly and hear the impact; and we also see the man's distressed face since he does not enjoy the act).
► A man punches another man in the face, and a man slaps another man in the face. We see a man pushed up against a wall by a police officer, and his hands are twisted behind his back as he is placed under arrest.
► A man is seen with several bruises on his face after getting into a fight with another man (we do not see this fight). A woman has to be restrained after attacking her ex-boyfriend.
► A man and woman jump off a cliff into water, the man hits a few rocks as he falls and he says that he thought the woman was trying to kill herself.
► In several scenes we see dead bodies lying in a morgue (the bodies are covered, but we see feet with tags on the big toe).
► We hear a man say he saw blood running down a man's face and that someone was decapitated. A man makes reference to seeing another man beat someone with a starfish. In several scenes a man is seen crying and it is said that he sounds like a woman. A man performs musicals using puppets, one puppet resembles Dracula, has blood on the corner of its mouth and it sings of not being able to die.

SUBSTANCE USE - In several scenes, a man is seen in a depressed mood, drinking mixed drinks and getting drunk, a man drinks for breakfast, and a man is seen holding a beer bottle and offers another man a beer. A man states that weed is the "cure for pain" and several references are made to smoking weed.

MESSAGE - You can survive a breakup and move on with your life. 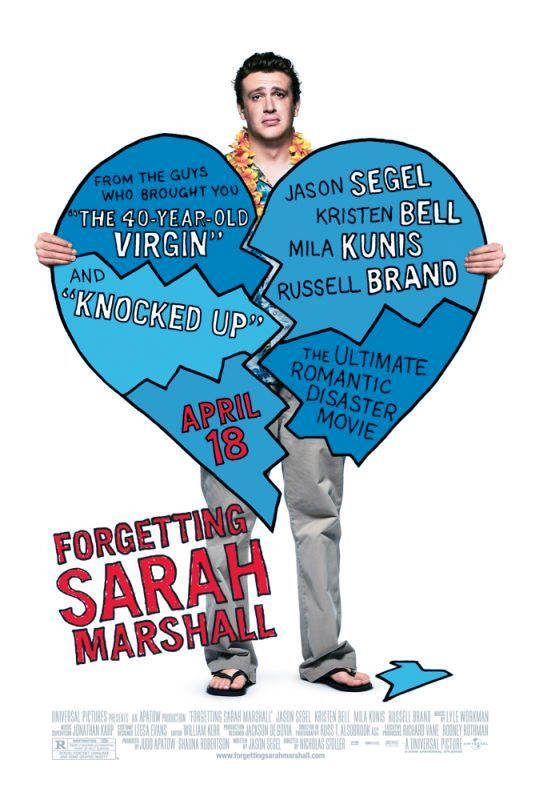