Based on a true story, this drama depicts the struggle of a couple (Brendan Fraser and Keri Russell) to encourage the development of a drug that would save their children from Pompe Disease, a fatal genetic disorder. Also with Harrison Ford, Meredith Droeger, Diego Velazquez, Sam Hall, Jared Harris and Patrick Bauchau. Directed by Tom Vaughan. [1:45]

SEX/NUDITY 2 - A husband and his wife kiss, she unties his tie, they continue to kiss, the scene changes and when we return to them we see her on top of him on a sofa kissing (she's wearing a short nightgown with cleavage revealed); they stand up startled by another woman who enters the house and when the man stands up his pants fall to the floor (we see him in boxer shorts).
► A woman wears a low-cut tank top that reveals cleavage and bare shoulders.

VIOLENCE/GORE 2 - A security guard holds a gun on a man in a lab.
► We hear about Pompe Disease, which causes muscle decay and death; the life expectancy of people with the disease is 9 years.
► A young girl is wheezing while in a hospital bed, alarm bells go off, medical staff enters the room and attempts to revive her, her mother and father are crying, and we hear that she pulled through. We see two children receiving IV infusions. We see two children in their wheelchairs or in bed with ventilator tubes at their throats in many scenes throughout the movie. Alarms sound in a girl's room when she has trouble breathing (we see that her skin is slightly blue-tinged). A young boy loses the control of his hand.
► Two men yell at each other and one throws a stack of papers at the other. People in a meeting argue bitterly and one man storms out. A man yells at another man in several scenes. A man yells at another man and tells him to get out of his lab in two scenes. A man tells another man, "I would have crushed you like a bug." We hear that a 9-year-old girl died from Pompe Disease. A doctor tells a husband and his wife that their daughter is dying, her organs are failing and that they have become enlarged. We hear a report about the enlarged organs of two patients and that the patients have less than a year to live. A man says, "I can't sit around and wait for my kids to die." Men in a meeting discuss what the "acceptable human loss" is in order to realize a profit in the manufacture of a drug. Families of children with Pompe Disease speak to scientists about their children and how the disease has affected their families. A girl, convinced her father is not paying attention to her, says she's going to "chop up the penguins with an ax and feed the bloody pieces to a walruses."
► A girl in a wheelchair chases a boy on foot, the boy crashes into furniture (tipping a potted plant onto the floor), and he yells for his mom to help him.

SUBSTANCE USE - Two men in a bar drink beer, and a man drinks from a beer bottle. We hear that two children have a "sugar high."

MESSAGE - A lot can be accomplished when people work together and look beyond profit. 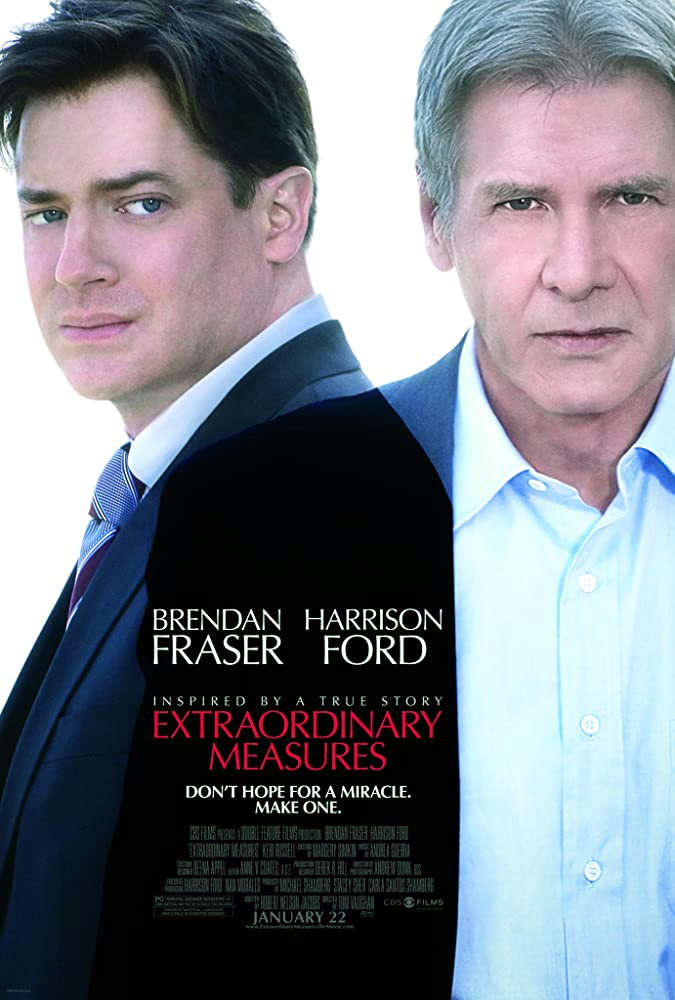