Animated feature that Christopher Reeve started directing before his death in 2004. It is set in 1932, during the Great Depression, and it follows the adventures of a 10-year-old boy who's trying to reclaim Babe Ruth's famous bat, Darlin', which was stolen by a Cubs pitcher. Assisting him is a talking baseball -- the bat talks too. With the voices of Whoopi Goldberg, Rob Reiner, Raven Symone, Jake T. Austin and Brian Dennehy. Directed by Reeve, Colin Brady & Daniel St. Pierre. [1:27]

VIOLENCE/GORE 3 - A boy runs along railroad tracks, while a man on a pump car chases him; a train approaches them, the boy jumps clear, but the man is struck by the train (we hear the man scream and the collision, but do not see it).
► A boy runs from a man who's chasing him, and runs through a train and out onto the back landing, then jumps out of one train and onto another that's speeding next to it, and the man reaches across and crashes into a post marker (we see the man with a black eye later). A man and a boy struggle over a baseball bat, the man is struck in the head by the bat, and then a girl throws an apple hitting him in the head and he is knocked out.
► A boy chases a car, jumps in the window, struggles with a man over a bat, and the man pulls the boy inside the car and they speed away. A boy runs from a man who's chasing him, he runs onto a fire escape, slides down and nearly lands on his head, on the sidewalk. A boy runs onto a roof, a man follows him, the man falls, bounces off a laundry line and lands hard on the ground.
► A boy and a girl throw apples at two boys, who throw apples back at them. Two boys shove and tease another boy a couple of times and he falls to the ground. Boys playing baseball tease one boy who tries to hit the ball but misses several times and he falls on the ground. A boy falls out of a tree.
► A man is struck by lightning (we see him light up and he is jolted, but seems fine later). A man trips and falls on garbage cans. A man pulls out hunks of his own hair and yells.
► A mother and father are very worried when they are unable to find their son. A boy is blamed after a baseball bat is stolen and his father is fired from his job for being on duty at the time of the theft.
► A boy walks alone at night, and a dog jumps out from woods and grabs a ball from the boy (the ball complains about being slobbered on). A baseball is struck by a bat, it is caught, then thrown and struck again (we see everything from the ball's perspective). A man yells at a boy and tells him to scram (the boy is frightened).
► A man pulls apart and otherwise destroys bobble heads resembling a particular baseball player (one is tied with string and a firecracker is attached to it, one has a pencil sticking through its head, etc.).
► A man hits a telephone repeatedly and it eventually breaks and falls off the pole. A boy throws a ball at a window (it bounces off), and then throws it again and the window shatters. A baseball bounces down stairs and complains about each collision with a step. A baseball bat screams loudly when a case it is in is opened. A ball complains when it is put in a boy's underwear drawer.
► A boy sleeps and a string of saliva drops onto a baseball, which throws itself out of the way. A boy flatulates. A man prepares a "booger ball" by blowing his nose on it and we see the ball covered with green goo.

MESSAGE - Never give up on something that you love. 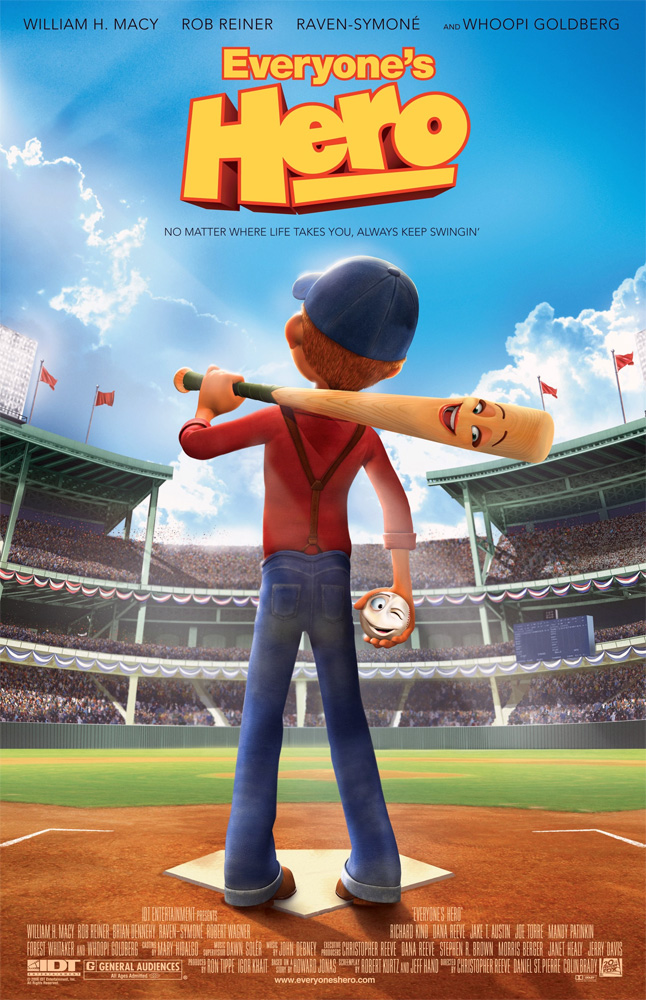