SEX/NUDITY 1 - A husband and his wife hug and kiss goodbye; she cries as he leaves and she is pregnant with their baby.
► We see sonogram pictures of a female fetus.
► A man is shown wearing swim trunks and we see his bare chest and abdomen.

VIOLENCE/GORE 5 - There are many scenes of people climbing up steep mountain faces using ropes and clips with strong winds and snow blowing violently.
► A woman is shown to be frozen and motionless while lying on the ground in a few scenes (her skin is blue-tinged and her finders are frozen in a curled position). A man lies motionless in the snow and we see his fingers and face with patches of red and black from frostbite. Climbers pass a dead and frozen body along the path they are climbing. A climber is shown lying motionless and presumably dead.
► A climber falls over a cliff silently in a windstorm. A climber slips and knocks many other climbers attached to the same rope down and they slide. Narrow ladders are laid across crevasses in ice flows and we see people wearing ice boots walking across them and holding guide ropes; one man falls off the ladder when snow and ice fall next to him and another man climbs out to help him back up (no one is hurt). Snow breaks away from a mountain side and a climber slips and hits another climber who stops them before they slip too far (they are OK). A man slips on a narrow cliff while trying to affix guide ropes (he is OK). People stand in the frigid, windy conditions while others affix ropes for them to use during a treacherous part of the climb; three climbers turn back after waiting because they were too cold. Several people make it to the peak of the mountain as wind whips around them and a couple of men collapse in exhaustion. A man trapped in a huge storm on a mountain begins to remove his coat and clothes, saying that he is hot and then falls off the cliff silently.
► A huge storm blows toward the mountain as climbers struggle to get down and to safety; we see the wind and snow slam into them as if they are running into a wall. A helicopter comes to the base camp and we hear they a chopper has never flown as high as they will need to rescue a man higher up the mountain; it struggles to get up higher, returns to the base camp to lighten its load and tries again (it barely makes it).
► A man falls to his knees, coughs violently and spits blood. A man lifts his foot to show that he has lost his toes due to frostbite. We see people hiking every day to high altitudes to "climatize" their bodies before going to the summit; some people struggle to breathe and others cough and the higher they go the sicker some people become. We hear that a man lost both of his hands and his nose to frostbite and we see him with bandaged hand stumps and dark marks on his face and nose. A man's frostbitten hands are swollen and bloody and we see them being put into buckets of water.
► A man says that he is "snow blind." A man yells at another man while climbing on a narrow ladder over a frozen crevasse. We hear that 13 people are stranded on a mountain. We hear about the many things that can happen to your body when you are exposed to the rough, cold conditions on a mountain (like hypothermia, frostbite, pulmonary edema, snow blindness, swelling of the brain, etc.). A man says that human bodies will be dying the higher they climb up a mountain. We read that when the first people climbed Mt. Everest, 1 in 4 died. We read that after 1992, mountain climbing became a money-making proposition and many amateur climbers tried to do it. A man points to a map of a mountain and calls one part the death zone. We hear that a sherpa had an accident and we see him being carried down a mountain on another man's back. A man talks about feeling like there is a black cloud over him and that he suffers from depression. Climbers pass a monument labeled "Climbers' Memorial." We hear that a man's body remains on the mountain along with the others that were lost that day.

SUBSTANCE USE - A man injects himself with "dexamethasone" and we see the needle but not the injection. People drink from bottle of beer in several scenes, a man drinks glasses of alcohol while sitting on a mountain side and shares some with a friend, and people dance and drink alcohol in a base camp tent.

MESSAGE - People are not meant to be exposed to environments like that on Mt. Everest. 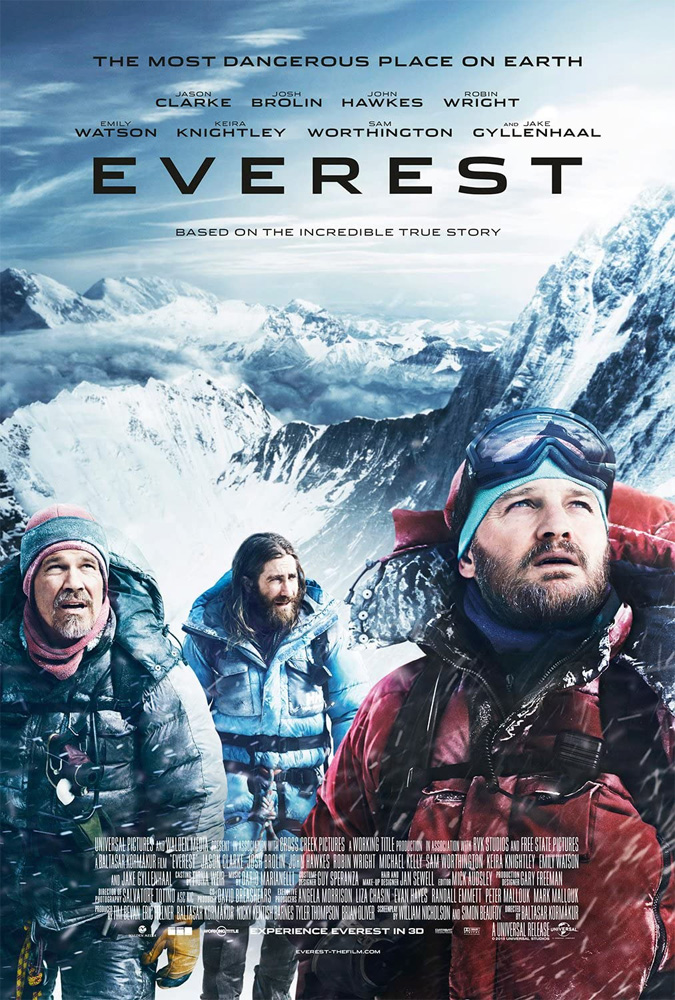