Medieval fantasy based on the popular novel: A rebellion rages in a land that was once protected by dragons and their heroic riders and is now ruled by a cruel monarch. When a young man (Edward Speleers) finds the egg of the last dragon, he becomes a dragon rider and must save his people from tyranny. Jeremy Irons, John Malkovich, Djimon Hounsou and Sienna Guillory. Directed by Stefan Fangmeier. [1:44]

SEX/NUDITY 1 - A woman's skirt is raised as she lies on the ground nearly unconscious, and her thigh is visible. A young man is bare-chested while changing clothes.

VIOLENCE/GORE 6 - There is a battle sequence that shows men fighting with swords: one man is stabbed in the chest with a sword (we see blood trickling from the wound). Warriors with swords, axes, arrows and spears attack many people during a battle sequence: we see people being slashed and hacked (we see a bit of blood spurting, although the scene is dark), and a dragon flies overhead spraying fire and setting structures on fire.
► A young man shoots an arrow through a man's forehead (we see it strike and the man's eyes roll back into his head). A warrior attacks a young man, a man stabs the warrior in the back and fights off a few others, and then the young man shoots an arrow that explodes, killing several warriors and breaking a bridge in half.
► Two dragons fight mid-air: their riders also fight using swords, the two dragons collide, and one holds the other's head in its mouth and bites (we see the bloody wounds later). A dragon and a young man crash to the ground, the dragon is badly wounded and appears to die, and the young man collapses over the dragon.
► A dragon picks men up in its mouth and throws them some distance. Dragons fly in the sky blowing fire on other dragons that then fall from the sky (along with their riders). A dragon crashes to the ground and is wounded (it is patched up and is fine).
► A young man is thrown onto the back of a dragon and he runs the rider through with a sword; then the young man falls toward the ground and is caught before hitting the ground. A man is surrounded by warriors, he fights several with a sword, one is stabbed through the chest (the remains turn to dust and seep into the ground), and a young man fights several of them.
► Warriors with bows and arrows in a forest fire on and strike two guards (we see them fall off their horses), and a woman is tackled off her horse, and along with a warrior tumbles down a hill. A warrior jumps from a ledge and is slashed by a man with a sword.
► A wizard stabs a warrior in the foot with a large sword (we hear a squish and the warrior yells). A young man tries to stab a wizard, the wizard throws axes at him and then a spear, and the spear pierces another man through the chest. A wizard touches the temple of a warrior (we see blood begin to ooze and the warrior falls dead to the ground).
► A warrior tortures a man for information (we hear squishing and the man screams), and we see him with a large hook through his shirt (it is not clear if the hook has also pierced his chest).
► Warriors grab two men, they squeeze them around the neck, and then slam them against rocks killing them (no blood visible but we hear crunching).
► Warriors break through the wall of a castle and attack people inside (we see and hear slashing and screaming). We see many dead bodies (it is muddy and dark and blood is not clear) after a battle. A roof collapses and the rubble falls on many warriors. We hear women screaming and see a group of people being attacked by warriors (not much detail is visible).
► A woman collapses while gasping from having been poisoned (her color turns grayish). A wizard uses powers to cause a woman pain, and she whimpers and writhes.
► A wizard creates a warrior, it comes up out of the ground and is swarmed by what looks like wriggling maggots.
► A wizard sets a forest on fire to trap a woman. A man sets a barn on fire where a dead man lies.
► A young man finds a man dead and he grieves over him; another man dies from his injuries. A dead body is buried under a pile of rocks.
► A man and a young man fight with sticks; the young man falls down or is knocked down a few times. Shackled prisoners are marched into a compound. A woman is tied to a table.
► A young man is swooped up by a dragon and carried through the sky, and then dropped onto a pile of hay on the ground (he is not harmed). A young man is startled when a large dragon lands on the ground in front of him.
► A young man threatens a man with a sword. A man kicks the stool out from under a man who falls on the ground.
► A woman's eyes turn cloudy while she is reading a young man's fortune and a wizard has an ashen complexion, red eyes and what looks like symbolic tattoos on his face.
► A young man holds a skin filled with milk for a dragon to drink, and the dragon snaps at it, tearing it and pouring the milk on the ground. Two young men shove each other and play fight with sticks.
► A man cuts meat with a cleaver and dead birds hang in a marketplace. A small dragon pounces on a rat and eats it (we hear the rodent screech and see its tail wriggle in the dragon's mouth).
► A young man with a bow and arrow takes aim at a deer and shoots (the deer is not struck). A dragon hatches out of an egg and flops around on the ground.
► A dragon flies with a young man in its back, and the young man's eyes change (the color changes and they look cat-like).
► A woman reads a young man's fortune and talks about a "doom surrounding him."

MESSAGE - Without fear there can be no courage. 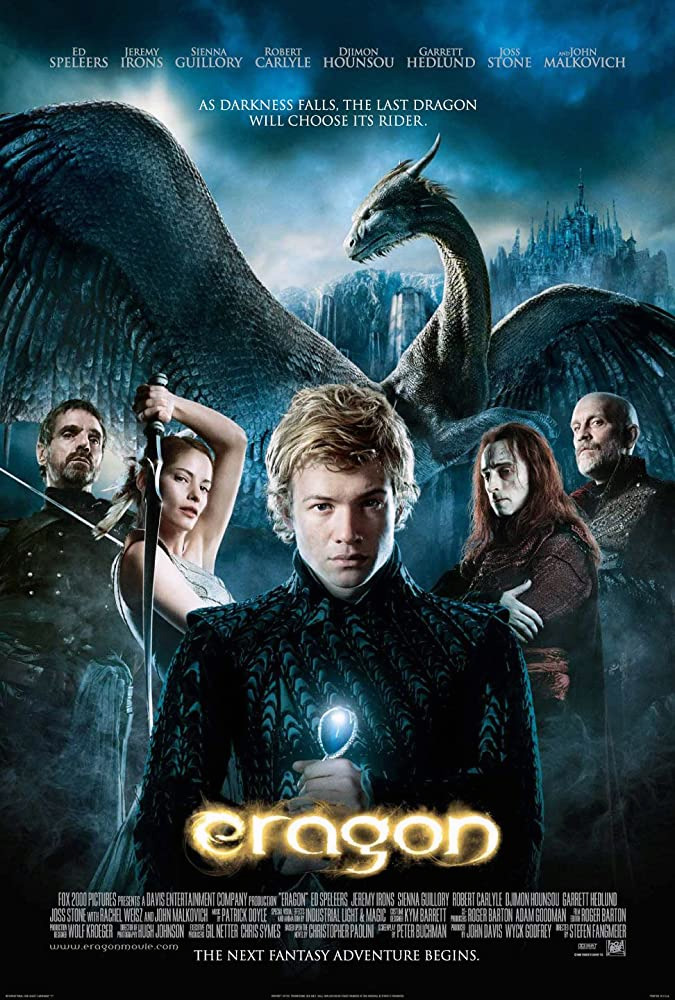