SEX/NUDITY 6 - A few kisses and a couple of kissing scenes (with a few kisses in each scene, but not any "making out" scenes). An extended sex scene takes place in barracks while people are sleeping around the couple; the couple kiss and put their hands down each other's pants, then the man thrusts on top of the woman (the woman's bare buttocks are shown briefly). We see the side of a man's bare buttocks (he passes gas to blow out a candle).

VIOLENCE/GORE 10 - Many war scenes during which we see planes spewing machine gun fire that hits many soldiers (we see them jerking while blood is spurting). We see injured and sometimes bloody soldiers, many corpses (sometimes bloody, and sometimes floating in bloody water) and bloody body parts. We see deserters being shot and killed by their own troops, groups of soldiers rushing each other, and explosions, fires and property destruction. Five soldiers are killed by gunshots to the head (blood spurts from the wounds, and we see one soldier's head in a puddle of blood). A woman is shot in the head (thick blood runs down her face) and a person is shot in the eye (we see blood where the eye used to be and blood in a pool of water under the victim). A person has a bloody shoulder and a very bloody hand after being shot, and a person is shot in the hand (blood spurts from the wound, which is later covered by a bloody bandage). A woman has a bloody face and a gaping bloody wound in her abdomen after being hit by shrapnel. A man puts a gun in his mouth, and then we hear a shot and a crash as he kills himself (it takes place behind closed doors). We see blood on a man's head and on the snow around him after he's been shot in the head. Twice we see a large bullet hole in someone's a forehead, from which a lot of blood oozes. And we see a man with an open, very bloody chest wound. Snipers stalk each other and shoot at each other in many scenes. A boy shoots at a wolf as it starts running in order to attack a horse -- later, in a flashback, we see the wolf attack the horse (the horse is frantic; no blood is visible). Twice (and from a distance) we see a boy hanging from a rope. A few hospital scenes showing injured, groaning soldiers who have bloody stumps for limbs and other bloody wounds, which are sometimes covered with bloody bandages. Also, through a train window we see injured soldiers with bloody bodies and bandages. We see many people with bloody bruises and cuts on their hands, faces and bodies and we see a sniper with lots of blood on his face. Blood from a person's face splatters on another person's cheek, and we see blood dripping down a wall. We see a corpse's decayed face a few times, and blood on a corpse's head and the rocks around it. Shards of glass fall on a man. A building collapses. 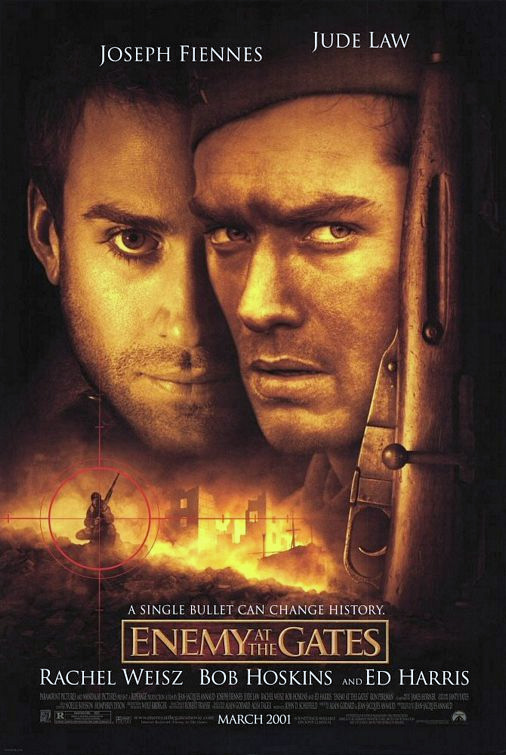