Why is “Emily the Criminal” rated R? The MPAA rating has been assigned for “language, some violence and brief drug use.” The Kids-In-Mind.com evaluation includes a kissing scene and a couple of implied sex scenes, a few scenes where people are threatened with knives, a few fights ending with bloody facial wounds, a stabbing, illegal activity including credit card fraud, several arguments, and over 30 F-words and other strong language. Read our parents’ guide below for details on sexual content, violence & strong language. A woman (Aubrey Plaza) with a criminal record is desperate to pay off her student debt and she thinks she has found the solution when a man (Theo Rossi) offers her a lot of money for a variety of small jobs, but nothing turns out exactly as she had hoped. Also with Bernardo Badillo, Jonathan Avigdori, Kim Yarbrough, Gina Gershon, Megalyn Echikunwoke, Wesley Han and Janice Sonia Lee. Directed by John Patton Ford. A few lines of dialogue are spoken in Spanish, Armenian and Arabic and some are without translation. [Running Time: 1:33]

– A woman holds a man’s arm as they walk on a sidewalk, she presses him against a wall and they kiss passionately; he holds her close, she wraps her legs around his waist as he grabs her buttocks (we see her partial buttocks), we see them in bed together later (sex is implied) and he gets out of bed wearing boxer briefs (we see his bare back and legs to the upper thighs and her bare back). A man and woman lie in bed together (sex is implied).
► A man asks a woman at a party if she wants him to pretend to be her boyfriend and puts his arm around her.
► A woman’s top is open on the sides and we see part of her bare breast and side. A woman wears tank tops in several scenes that reveal cleavage, bare shoulders and partial abdomen and the outline of her nipples are often visible through the fabric. A woman wears a crop top and shorts that reveal cleavage, bare abdomen and legs to the hips. A woman wears a bikini at a beach (bare back, abdomen, legs to the hips and cleavage are seen).

– A man forces a woman’s apartment door open, pins her on the floor and holds a box cutter to her throat while another woman empties a safe and steals a dog in a crate; when the two thieves leave the apartment, the woman goes after them with a taser, she zaps the man (he jolts and moans), and she throws the woman out of the driver’s side door of their pickup truck and pins her on the ground with a taser held under her chin; she retrieves her property and leaves (the dog is unharmed). A woman tasers a man and another man kicks him in the stomach when he falls to the ground; they lock him in the trunk of a car and leave him there. A man hits another man in the back of the head and he falls hitting his head on a bathtub and is knocked out (we see blood on his head); the first man attacks a woman, holds her on the floor choking her and she stabs him in the abdomen with a box cutter (we see blood), and she holds the blade to this throat and threatens to kill him unless he tells her where money is. A woman uses a fraudulent cashier’s check and credit card to buy a car and when one of the dealers tells her to get out of the car and return to the office, he reaches in the car and grabs her, slams her face into the door (she has a bloody nose), and she speeds away and the man chases her in another car; a truck pulls across the road and the cars stop, the woman gets out and sprays the man with pepper spray (he yells and falls to his knees) and the woman speeds away.
► A man gets into a woman’s car with a bloody cut on his forehead (we don’t see what happened). Armed police kick an apartment door open and search for a woman (she is not there). A woman sells a TV out of the back of her car and the two men there to buy it try to strong-arm her to pay less; the men threaten to steal it and she threatens to leave, and they eventually pay what she asked.
► A man confronts another man and a woman telling them that she has put their operation at risk and they argue. During an interview a man asks a woman, “I see you have something on your permanent record”; the woman explains that it was a DUI and that she ran a red light while intoxicated, the man goes on to asks about an aggravated assault charge on her record and the woman becomes angry and storms out of the interview. A woman becomes upset when during an interview for a job, she is told that the position is unpaid for the first 6 months; she confronts the employer for thinking it’s OK not to pay people and they argue. A man tells a woman that her hours will be cut because she left the job early the day before without calling him; she becomes upset and they argue. A man offers a woman a job that will pay more money and when she asks what she will have to do, he says, “Kill someone,” and then tells her that he’s joking. A man gives a woman a taser to use as protection when she sells expensive stolen items out of the back of her car. A man and a woman argue. A man tells a woman, “You are a very bad influence.” A woman talks about fighting with an ex-boyfriend all the time and that he accused her of assault; she says that she didn’t go far enough to scare him. People are told that they will make a lot of money in a short time but what they will have to do will be illegal. A woman talks about the amount of student loan debt she has and that she is going to move back home to save money; another woman tells her that she will vouch for her for a job at her office.
► A man opens a storage unit and finds it empty, then finds his office ransacked and his bank account empty. A woman uses a fraudulent credit card to buy a big screen TV and when she leaves the store, she is approached by security in the parking lot asking, “Are you going to pay for that?” not remembering that she put a baseball cap from the store on her head to disguise her from the security cameras and did not return it or pay for it. A man plans a robbery with a woman.
► A man and a woman delivering catered food to an office have to carry the delivery up many flights of stairs because the elevator is broken and we see that some of the food has spilled when they arrive. Thunder rumbles and lightning flashes as a woman sits on a beach.
► A dog cries and barks when it is locked in a crate and is quiet and calm when a woman holds it on the bed with her to sleep. A woman hyperventilates and gags after a violent encounter. A man is shown with a cast on his arm (we don’t know what happened).

Emily the Criminal SUBSTANCE USE

– Without opportunities, crime is frequently the only option to survive. 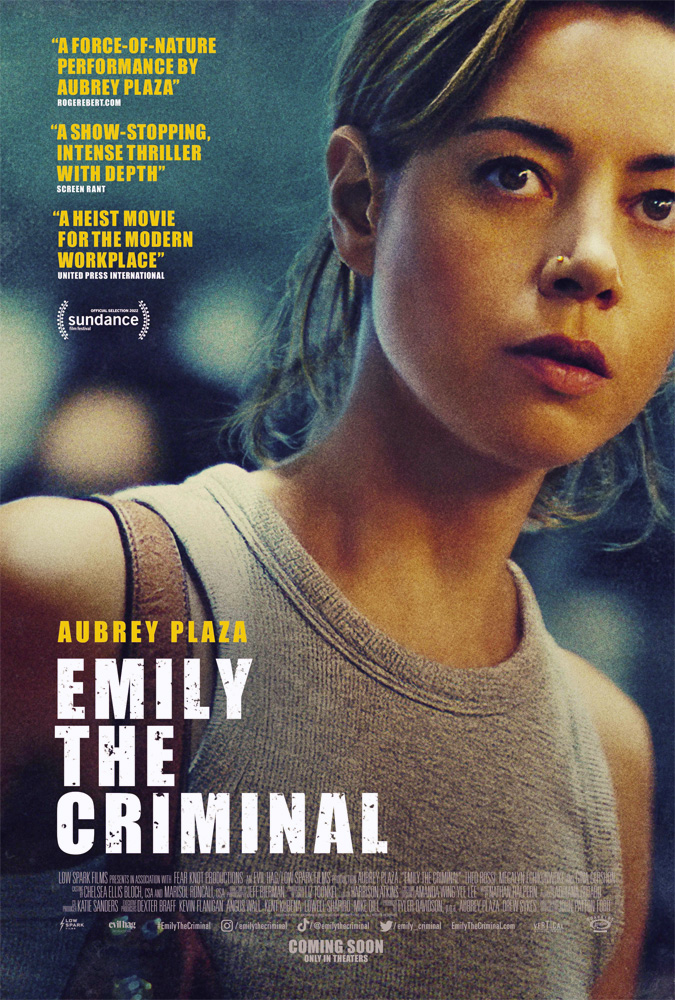