Why is “Emergency” rated R? The MPAA rating has been assigned for “pervasive language, drug use and some sexual references.” The Kids-In-Mind.com evaluation includes some suggestive dancing, conversations about relationships and sex, an unconscious young woman, a police chase, young men held at gunpoint by police, many conversations about calling emergency services and the fear of being killed or arrested, many arguments, discussions of racism and racist language, drug use, vomiting with goo, and over 120 F-words and other strong language. Read our parents’ guide below for details on sexual content, violence & strong language. Two best friends (RJ Cyler and Donald Elise Watkins) plan to celebrate the start of their Spring break by making a tour of several campus parties, but when they find an unconscious young woman in their apartment, they spend the rest of the night trying to figure out what to do with her. Also with Sebastian Chacon, Sabrina Carpenter, Maddie Nichols, Madison Thompson, Diego Abraham, Summer Madison and Gillian Rabin. Directed by Carey Williams. [Running Time: 1:45]

– A painting shows a woman with her hands over her bare breasts (we see partial side breasts, cleavage and abdomen). Party scenes show young women wearing low-cut and cropped tops that reveal cleavage and bare abdomens and shirtless young men (bare chests, abdomens and backs are seen). A young woman wears a cropped corset-type top that reveals cleavage and bare abdomen.
► Young men and young women dance with hip thrusting and shimmying at several parties.
► A young man makes several comments about the size of another young man’s genitals when talking about a young woman. A young man talks about not wanting to start a relationship at the end of the school year. A young man talks about a “cute freshman chick.”

– Two police cars chase a van and the van stops in a hospital driveway, where officers surround the vehicle with their guns drawn; one young man in the van is held at gunpoint, pulled out of the van and held on the ground with a gun to his head.
► A young woman, unconscious in a van, wakes up in a panic and kicks the driver causing him to swerve off the road and into a ditch, and she elbows a young man in the backseat with her and we hear a crunch (we see a gash on his nose and a lot of blood). A young woman carrying a stick runs toward two young men carrying a young woman, she pokes them and hits them with the stick, she falls onto the ground and accidentally sprays herself in the face with mace. A young man shoves another young man and he falls to the ground (he seems unharmed).
► Two young men argue about one of them driving a car while high as they approach a police sobriety checkpoint. Two young men argue about whether to call the police about an unconscious young woman, with one insisting that the police will arrest them and shoot them. Two young men argue in several scenes about responsibility. A young man says that the police shot his cousin and that he has to use a colostomy bag now. A young woman panics and looks around at a party trying to find another young woman. A man yells at a young man saying that he is on parole and that he could go back to prison because of something he has done. A young man panics and says, “We’re gonna die tonight.” A young woman yells at a police dispatcher over the phone. A professor talks about language and how certain words maintain their power to be offensive, specifically a derogatory racial term; when she uses the word and puts it up on a large screen in class the students are uncomfortable. A young man makes fun of another young man for wearing a “fanny pack.”
► Several young men yell and chase two other young men and they throw things at a car as it speeds away (the car’s tail light is broken by something thrown). Two young women and a young man on a bicycle and a motorized skateboard chase a car on a dark road. A young man carries an unconscious young woman wrapped with a blanket out of a house and puts her in a van. A young man starts chest compression and CPR when a young woman seems to be going into shock.
► A young man looks at dishes through a microscope and talks about bacteria he is nurturing for research in a couple of scenes; he worries that they might have died when not refrigerated properly. A young man burps loudly. A young man urinates against a pole and we see the stream as he moans. A young woman is shown unconscious on the floor in an apartment and she later revives and vomits on the floor (we see a puddle of goo); she vomits again later and we hear her gagging and coughing and we see more goo. A young woman vomits pink liquid on the floor of a house (we see the goo). A young woman up in a tree vomits on the ground below (we see goo). A young woman stands in dark woods and urinates (we do not see any urine). A young man vomits into a toilet (we do not see goo). A young man slaps the phone out of another young man’s hand and it falls in a puddle of vomit (we see the goo); the second young man later retrieves the phone and uses it.

– Fear of racist assumptions can keep people from reaching out for help. 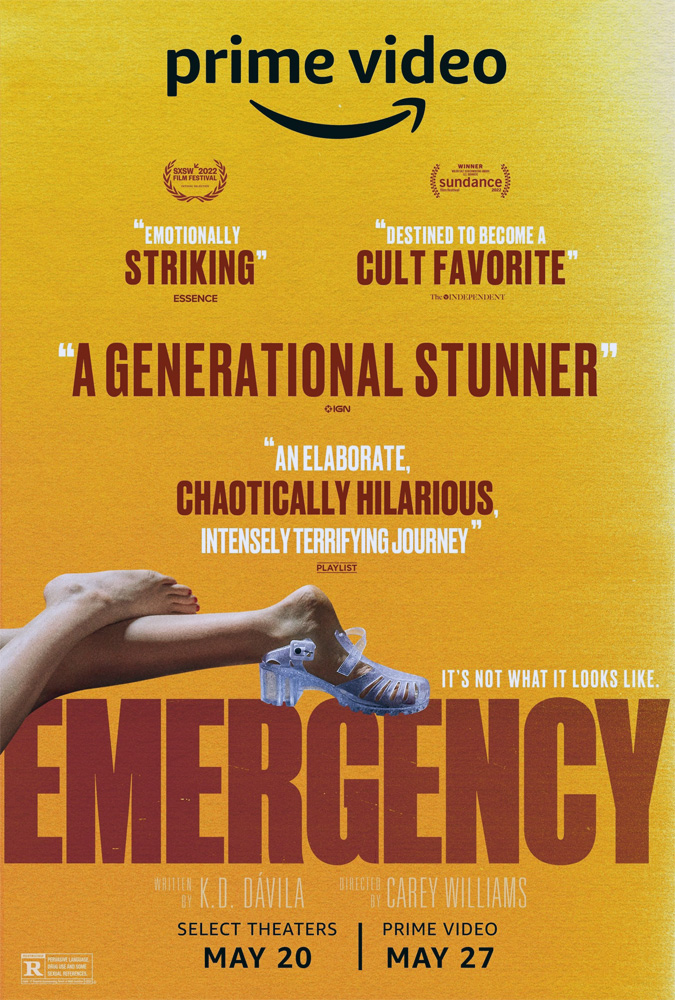