Inspired by actual events: A boy (Tom Costello Jr.) in a knee brace is determined to become an Olympic athlete, against his father's (Keith Allen) objections. As an adult (Taron Egerton) he plans to represent Great Britain in the ski jump at the 1988 Winter Olympics, but must train without financial support or the approval of the British Olympic Committee. Also with Hugh Jackman, Iris Berben, Christopher Walken and Jo Hartley. Directed by Dexter Fletcher. Some lines of dialogue are in Finnish, German and Norwegian with English subtitles. [1:45]

SEX/NUDITY 3 - Several sweaty men appear fully nude in a sauna (with genitals obscured by a bucket or the manner in which they sit on wooden benches); we see bare chests and abdomens, as well as the partial buttocks of two men and another man wearing only knee-length shorts enters and says, "Oh God, nude." Two skiers appear bare-chested in a locker room and a coach looks them up and down as they ask the secret to successful skiing and the coach replies, "Clothes." An older woman behind a bar wears a low-cut blouse that reveals some cleavage.
► A ski jump coach explains to a male trainee that the downhill slope is foreplay and the takeoff from the jump is like an orgasm; when the trainee does not understand, the coach acts out with facial grimaces, moaning, and the final shout for the jump is as if he's climaxing (the coach mentions the shout a few more times in future practices). A man says about a new ski jumper that the younger man should be crashing into the ladies instead of crashing down slopes. A reporter asks a ski jumper if it is true that he has had a lover for two years and that he has a baby; the jumper looks blankly at the reporter as the scene ends. A man sleeps in the small supply room of a ski café and the middle-aged owner wakes him up and she says that in the past he would have been in her cabin and asks how he would like her to visit him some nights; he confusedly declines as he walks out of the room.
► An official hugs a woman in the viewing booth. A ski jumper shakes his rear end at a cheering crowd and they laugh and applaud.

SUBSTANCE USE - A man drives a van while drinking alcohol from a flask of whiskey that he carries in his hip pocket and pulls out in several scenes (in a parked snow plow, in random outdoor shots, at a ski jump camp a few times, at home, and at a ski competition), a man offers a flask to a younger man who says that drinking doesn't agree with him, a man lights a cigarette and drinks from a flask before jumping a 90m slope and he chugs from a bottle of whiskey at the bottom of the hill, a man keeps two bottles of whiskey on top of a crate-bookshelf in his bedroom, a man drinks two shots of whiskey, a man says that he has quit drinking and we see him remove a flask from his pocket and not drink from it, two café scenes show many men and women drinking glasses and bottles of beer, a man drinks a glass of beer while talking on a payphone in a café, men and women at a ski slope hold and do not drink from champagne cups and we see a bottle of champagne on a table, a beer bottle is shown on a coffee table near a man and a woman has a glass of wine in a home (neither person is seen drinking), and several skiers pressure a non-drinking new team member into drinking shots of different alcoholic beverages symbolizing the Olympic Rings and then order him a beer (the next morning, the new man is asleep in a laundry cart and awakens with a severe headache). A man smokes a cigarette in a house twice and another man smokes a cigarette in his workshop and a café several times, a man smokes a cigarette inside his snow plow cab twice and outside near a ski jump hill three times, and a man sits with a large ash tray partially filled with ashes and a lighter at a bar (we do not see him smoke).

MESSAGE - A hero is a person who does not quit, not one who wins medals. 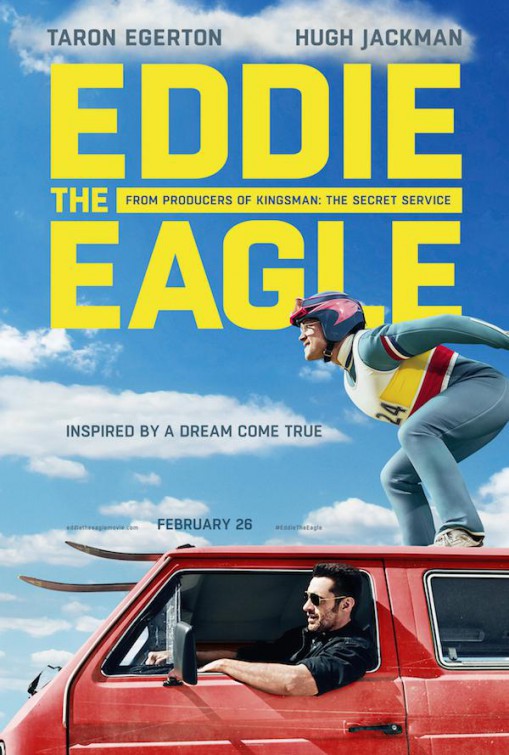