Stop-motion animation comedy about a resourceful cave man (voiced by Eddie Redmayne) who leads his tribe to defend their land from being taken over by another tribe that wants to set up a precious metal mine. Also with the voices of Tom Hiddleston, Maisie Williams, Timothy Spall, Richard Ayoade, Mark Williams, Miriam Margolyes, Nick Park and Rob Brydon. Directed by Nick Park. [1:29]

SEX/NUDITY 2 - Men and women are shown sleeping in a pile on the ground and one man puts the toe of another person in his mouth like a pacifier. A hog kisses a man on the mouth.
► A nude man is shown on a football (soccer) field and we see his bare back, buttocks, chest, abdomen and legs (his genitals are covered by a flag). We see a picture of many men with their pants pulled down and exposing their bare buttocks. A man slides on a bar of soap and slips between the legs of a man showering; we see the man's bare chest. We see pictures of men wearing shorts and tank tops. A man is shown seated in a bath tub and we see his bare chest, abdomen and back. A man's jersey is pulled off and we see him bare-chested. A man falls to the ground wearing only his underpants and we see his bare chest and abdomen.
► A woman remarks about the photo of an athlete and says, "Nice tight shorts." A man asks another man for a massage with his "firm hands" not realizing that it is a hog and not a man; the hog massages the man's shoulders. A woman says, "Ooo," when she sees football (soccer players). A woman says to a man, "Stuff your nibbles."

VIOLENCE/GORE 3 - A large meteorite crashes to the ground and people are thrown and we see them lying in rubble. Volcanoes are shown rumbling in the background of a couple of scenes and lava spits out of the openings.
► A man is slammed into a goal post and splinters it; we see him being taken away on a stretcher. A man falls into a crevice (we don't see what happens to him). A man is pinned under a large stone slab and we see his feet sticking out from under it (we don't see what happened to him). A man picks up a hot meteorite, yells and throws it. A man is flung by a tree limb that is pulled over like a catapult when he tries to reach a piece of fruit; he slams into a tree, a piece of fruit splatters on him and a hog licks the goo off his face. A man jumps in the air and lands in another man's mouth (his feet are sticking out). A man puts another man's leg in his mouth and bites; we see teeth imprints in the man's flesh (no blood). Two men crash together when trying to catch a rabbit and a woman slams a club down on a fallen tree where the rabbit is hiding. A rabbit is shown wrapped with rope and on a spit over flames (we see the rabbit unharmed later). A bird squeezes a man's nose and we see red finger prints left behind; a woman does the same thing to the same man later. A man, a woman and a hog jump out a window and use toilet paper to lower them gently to the ground. A man is grabbed and bound by guards. We see a cave person being whipped when working in a mine (this is an imaged scene), and a woman complains that her arm hurts and we hear a whip crack. A man throws a trident and it lands between another man's feet.
► A giant duck grabs a man wearing a rat costume and thrashes him back and forth causing many bronze coins to fall into a crowd of people below. A giant duck walks toward a man who throws a rock at it; we see the duck getting larger as it moves toward the man and we see teeth in its beak). A giant duck with men and women on its back flies into an arena, it flatulates and splatters a large amount of droppings onto a man in the stands. A rabbit makes a shadow puppet of a predator on a large stone wall and cave people run in fear.
► A man runs away from men with spears, slips on soap and slides between the legs of a man showering (please see the Sex/Nudity category for more details). A man with an axe jumps toward another man; he is thrown out of the way and slams into a wrecking ball. Giant mammoths wearing heavy armor move through woods toward people who throw a large rock at them; the men riding the mammoths throw spears back at them, a large rock with a face painted on it breaks (like its head is cut off), a spear is launched toward a hog and a man pushes it to safety. A woman punches a man. Several cave people fight over food and a large leg of meat. Dinosaurs fight and we see them biting each other on the neck. A man sits on a large beetle's back and when the beetle walks away the man falls on the ground. A man tumbles down bleachers in an arena and yells the whole way down (he's OK later). A bird squeezes two walnuts and the shells shatter. A draw bridge falls on a man's foot and he yells. A man threatens to suspend a player and we see a skeleton hanging from its ankle above the arena. A man wearing a rat costume steals a large chest of bronze coins and tries to get away.
► People are forced out of their valley and sent to "the badlands" by greedy people who want to mine the land. Barbed wire separates the badlands from the valley.
► During training sequences, many men and women hop across stones floating in lava and dodge boulders rolled toward them. A man yelps when bitten in the groin area by a lizard and he pulls it out of his underwear.
► A man asks another man if he changed his under pants and the man responds in the affirmative and implies that he had help from another man. A man prays, "May we live in peace," and then says, "Now, let's go kill something." A hog barks like a dog at something moving in dark woods and howls later when he is separated from his people. People chant in an arena where a football (soccer) match takes place. A man says, "Take him and kill him slowly." Two men argue and one says, "You have no home," while the other replies, "You took our home." A man says about his wife, "That old crow." Newspaper headlines read, "Caveman Clash," and "Road Woage." Two men and a hog yell at each other. A man panics about losing. A woman blows a vuvuzela loudly in the stands. Puppets replay a play in a football (soccer) match and we see several men pummel another man with clubs.

SUBSTANCE USE - People shown in an arena hold mugs of beverages but it is not clear what it is.

MESSAGE - Being a team can get you through most sticky situations. 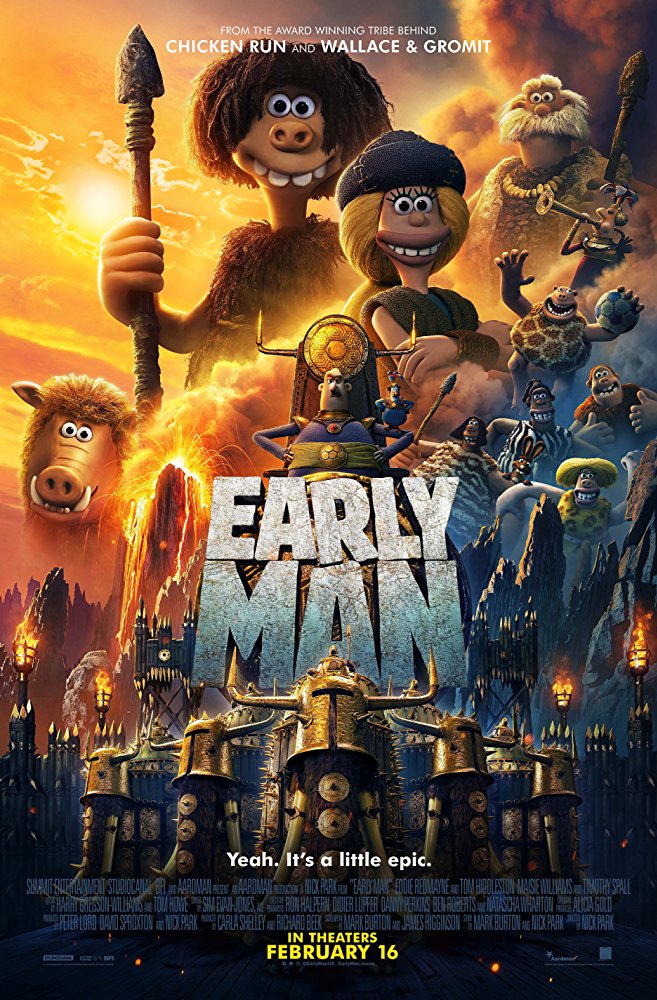