A man (Nicolas Cage) escapes Hell with a special cache of weapons and seeking revenge after members of a religious cult kill his daughter and plan to sacrifice his baby granddaughter. A former waitress (Amy Heard) and an old mechanic (David Morse) join his quest, while one of Hell's accountants (William Fichtner) is sent to bring the escapee back. Also with Billy Burke, Christa Campbell, Katy Mixon and Charlotte Ross. Directed by Patrick Lussier. [1:44]

SEX/NUDITY 9 - Four scenes portray sex acts by two nude women astride two men (one man is fully clothed throughout two of these scenes and we see the other man's chest, abdomen and thighs) in bed and bouncing up and down in active sex and moaning; in one scene, the nude woman also lies backward on the bed and thrusts forward several times, with bouncing breasts, we also see buttocks and thighs and the camera moves around to show more bouncing breasts and one shaved female pubic region is shown briefly.
► A clothed man seems to stay sexually connected to the nude woman as he carries her around in a prolonged gunfight (please see the Violence/Gore category for more details).
► A woman enters the cabin of her fiancé and finds another nude woman, whom she pulls out of the house by the hair (please see the Violence Gore category for more details); we see full female nudity and bouncing breasts.
► One scene includes several shots of several nude women and partially clothed men dancing and drinking in an abandoned prison yard; several men are shirtless and nude women reveal breasts and buttocks (tattoos can be seen above the buttocks). Several bar scenes in a tavern called "Bull and Balls" show waitresses in low-cut, tight, short-sleeved blouses that reveal substantial cleavage and short shorts or cut-off shorts that reveal the bottom of buttocks.
► A waitress picks up a waiter in a bar, the camera cuts to him sitting nude on her bed painting her toenails (she is dressed and we see his bare chest and back), and he asks if they are going to "do it"; grunting sex noises from the room next door are too loud and the woman pounds on the wall and yells "Shut up!" several times as the scene ends. A diner cook rubs his hands over a waitress's abdomen and pubic area (over her uniform) and says someone has to pay (in sex) for a muffin she gave away to a child (pleases see the Violence/Gore category for more details).
► A waitress in a diner tells a male customer that she's "randy" and she holds his hand; he grabs her by the throat, kisses her hard, and releases her. A woman tells a state trooper that finds her wrapped with a blanket in a closet that a man killed someone while having sex with her.

SUBSTANCE USE - A clothed man smokes a cigar and drinks from a whiskey bottle while having sex with a nude woman he is carrying and engaging in a long gunfight with several other people, several bar scenes show beer bottles on tables and people drinking beer from bottles and cans, in an outdoor scene a woman holds a beer bottle and a man holds a beer can (neither drinks), a cult scene shows people dancing while drinking from beer cans and beer bottles and shooting guns in the air, a cooler of beer bottles and cans sits next to a crate of firearms and ammunition, and a man pours beer from a bottle into a human skull, points it to the audience as he speaks and spills beer forward in 3D. A woman smokes a cigarette while leaning on a car door, and two teen boys light up a cigar and smoke it together under a viaduct.

MESSAGE - There is compassion even in Hell. 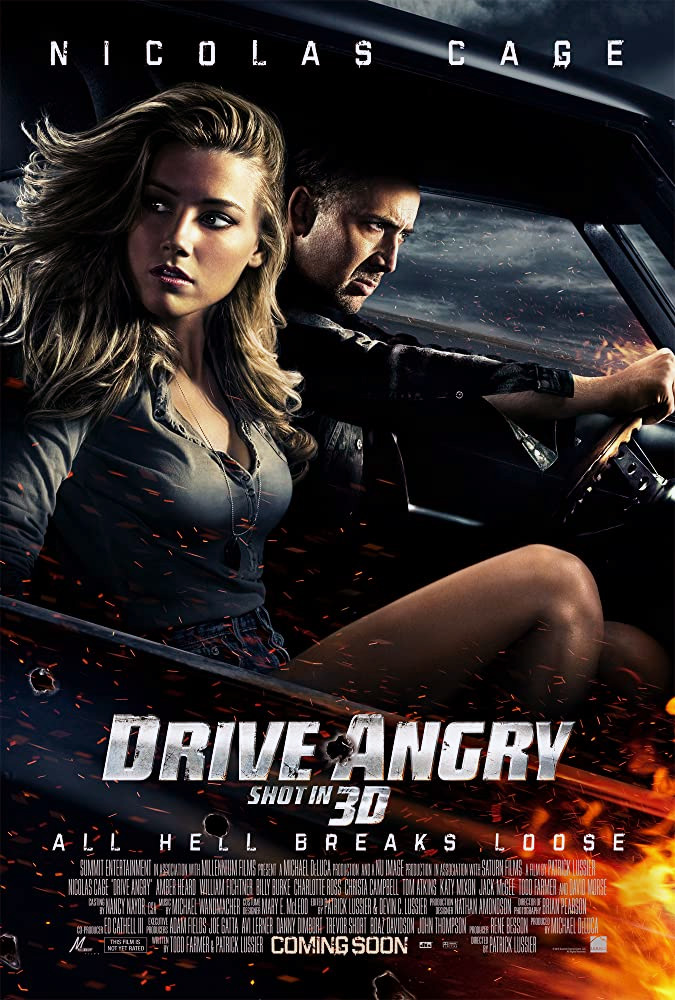