After a nuclear attack on New York City, a group of apartment tenants survive in the basement of their building, where panic slowly increases as their supplies begin to dwindle. With Lauren German, Michael Biehn and Milo Ventimiglia. Directed by Xavier Gens. [1:50]

SEX/NUDITY 9 - A woman spies on two men as they rape another woman and we see one of the men actively thrusting behind the woman (she is on her hands and knees); the second man watches and feeds the woman from his palm and she cries and screams in pain (we see the two men's bare chests, the woman has duct tape wrapped around her bare breasts and a portion of her bare buttocks are visible; please see the Violence/Gore category for more details)
► A man kisses a woman passionately, he pulls down her pants, he shoves her against a wall, she struggles and the man punches and elbows her in the head (we see blood coming from the woman's nose and mouth) and rapes her (we see him thrusting from behind and no nudity is visible; please see the Violence/Gore category for more details).
► A man and a woman have sex; the woman is shown wearing a nightgown that the man pushes up to expose her bare thighs and partial buttocks while he thrusts and they change positions multiple times (another woman interrupts them as they lie on top of each other afterward).
► A woman finds a dead woman, with blood smeared all over her torso and it appears to have come from her genital area; the dead woman is lying on a bed, with duct tape covering her bare breasts and crotch, a man watches the woman staring at the dead body and suggests that he and another man had raped her to death (please see the Violence/Gore category for more details).
► Two men (they appear fully nude and their bare back and chest are visible but their genitals are heavily shadowed) grab a woman who appears dazed (it is implied that the woman is the victim of repeated rapes); she looks haggard and screams as the two men drag her away and another woman watches and shouts.
► A woman kisses a man, and he rubs against her while pushing her against a wall and kissing her passionately; the man appears as though he is about to sexually penetrate the woman (no nudity is visible), he partially lifts her shirt and she pushes him away (the man's bare chest is visible).
► A man wearing a woman's nightgown corners another man, and he makes crude, sexually suggestive remarks about the man needing to imitate female genitals; the man licks the other man's face and passionately kisses him until the man in the nightgown pulls away, shoves the other man's head toward his crotch, shouts at him to perform oral sex and moments later the man in the nightgown pulls the other man up and shouts that he is joking as the other man screams.
► Two men corner a woman and rub their hands over her body, and one of the men gropes the woman's breasts as the other man makes a crude remark about the woman sexually climaxing and the woman pulls away. A man licks and gropes a woman, and we see a woman wearing duct tape around her breasts and duct tape over her crotch as a man suggestively touches her. A man touches another man's genitals through his underwear, and we see the outline of his genitals resting on a table; the two men instruct a third man to also touch his genitals and he refuses. A man and a woman rub their arms on another woman while making sexual remarks suggesting that the woman join them for sex; the man grabs for the woman's crotch and she shouts and pulls away.
► Throughout the movie we see a man shirtless with his bare chest and back visible. A man wears a woman's nightgown, and he lifts the nightgown continually to expose his brief-style underwear. A woman takes off her shirt and we see her bra. A man dressed in a woman's nightgown stands in front of a mirror and applies makeup while a shirtless man wraps his arms around the man's shoulders.
► A man tells a woman to perform oral sex on another man while making a crude remark about the man's sex life with his wife. A man tells another man that he knew a third man was having sex with the man's wife.
► A woman sits and places a man's arms around her shoulders. A woman kisses a man's hands.

MESSAGE - Greed and need can lead humans to lose empathy and their humanity. 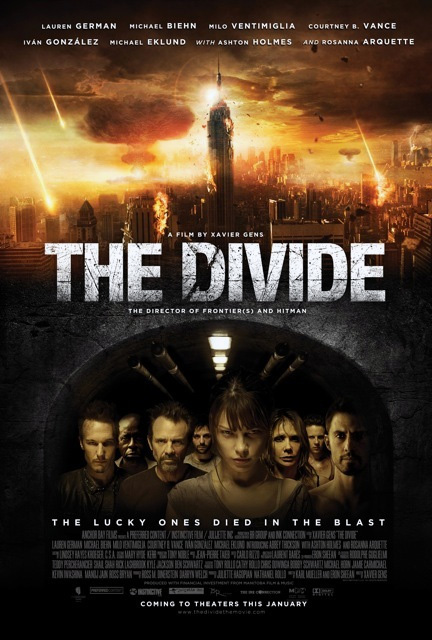