Sacha Baron Cohen stars as a ruthless dictator from an oil-rich small North African nation. Wanting to pursue a nuclear weapons program, he visits the United States with his brother (Ben Kingsley) to address the United Nations, but he ends up stripped of his position and has to get a job in an organic grocery store run by an activist (Anna Faris). Also with Jason Mantzoukas and J.B. Smoove. Directed by Larry Charles. [1:23]

SEX/NUDITY 7 - A woman on her hands and knees on a bed leans over a pitcher while a man tugs on her breasts and milk sprays into the pitcher (we see her bare breasts and we hear the milk spray into the pitcher). A man dangling from a zip line cable swings into a window where a woman stands and screams; we see his genitals and pubic hair smash against the windowpane.
► A woman takes a man to a room, leaves him inside, closes the door and instructs him from outside how to pleasure himself; we see his eyes widen, he moves rhythmically and he runs out of the room with a semen covered tissue on his hand.
► A woman dresses after having sex with a man (we see the man bare-chested and wearing boxer shorts and we see the woman wearing a bra and undergarments). A nude male infant is held up and we see that he has a great deal of pubic hair, as well as facial hair. A man wearing a T-shirt and jockey shorts runs out of a building (we see bunches of pubic hair sticking out of both leg holes). A woman wears a low-cut dress that reveals cleavage.
► We hear passionate moaning from inside a room, we then see a man lying on top of a woman in bed and we see the man's bare back and chest as he rolls off the woman and he tells her, "You now have happies," implying sexual gratification; he asks her to stay with him to "cuddle" but she replies that she has to be with another man.
► A man wakes up in bed and we see movement under the covers as if someone is performing oral sex on him and we then see another man's decapitated head move out from under the covers.
► A pregnant woman in labor lies on the floor of a store, a man says he can help her deliver, he puts his hand in her anus twice (we don't see anything and she yells at him), then reaches in to help the baby out and drops his phone inside the woman (we see the telephone inside the birth canal), and another woman reaches inside the pregnant woman and the man and the woman hold hands inside her (we see the hands inside the birth canal) until the pregnant woman yells at them; the baby is born and we see it covered with blood and goo.
► Several women remove their clothing to their underwear (we see cleavage, bare abdomens and bare buttocks), they surround and caress a man lying on the floor (please see the Violence/Gore category for more information), and the man kicks one of the women across the room and into a table; the man complains that "she tried to milk me" (she does not appear harmed).
► A man tells another man about several women, "They are trying to pleasure you" and two of the women kiss each other passionately; the man then kisses the other man, who pushes him away and leaves the room. A man and a woman kiss, they lie on the ground, the man says that he ejaculated and he kisses the woman's neck and her belly button and he licks her hairy armpits. When going to help a pregnant woman deliver, a man kneels on the floor between her legs and begins to unfasten his pants (as if to have sex with her) before he is stopped. While riding on the back of a moped driven by a woman, a man grabs the driver's clothed breasts.
► A man kisses the clothed armpits of another man presumably in greeting. Two men rub noses. A man and a woman hug. A man makes a sexual gesture with his hand and mouth.
► A man asks a woman to perform oral sex on him and she tells him that he will have to touch himself. Two men come out of a men's restroom and one smacks the other on the clothed buttock (it is implied that some sex act has just taken place). A man makes several comments about having famous people perform sex acts on and with him for money. A man tells another man that his job is to clean semen out of laptops. A man tells another man in prison to perform oral sex on the biggest guy in there. A man tells a woman, "They raped me." A man talks about another man sexually abusing several boys who went on to commit suicide. A man asks a pregnant woman, "Are you having a boy or an abortion?" A man says, "I was his lover," talking about another man. A man describes the appearance of a missile using sexual terms.
► We see a wall covered with photographs of a man posing with different men and women and implying that they were all his sexual partners.

SUBSTANCE USE - Several men sit at a table where there are several hookah pipes. 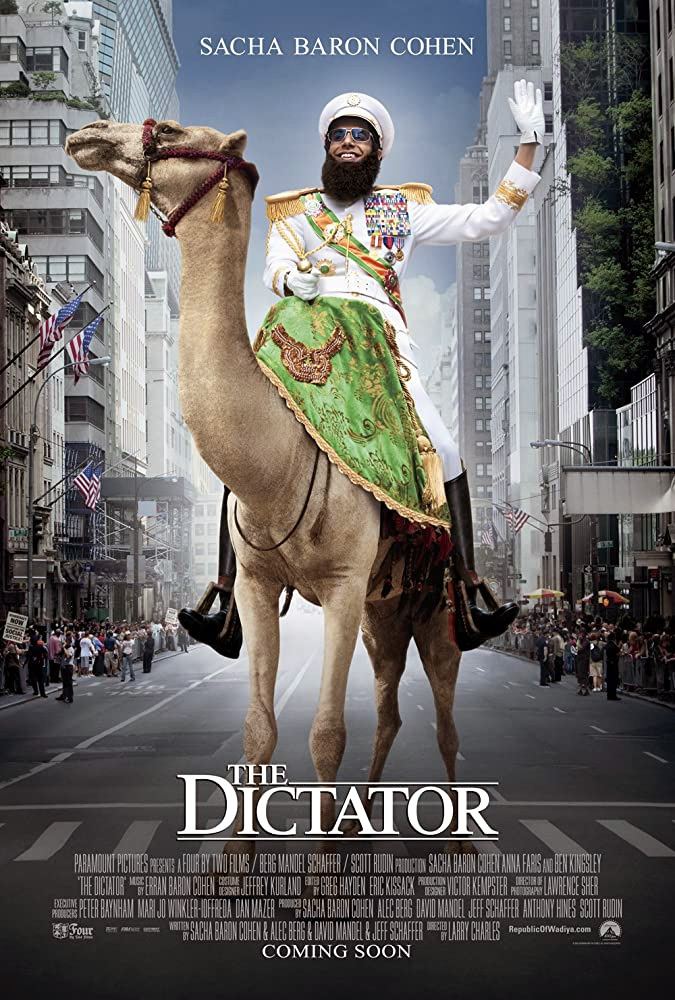