A woman's marriage ends one evening when on the eve of their 18th wedding anniversary her husband tells her that he's been having an affair with another woman, has two children with her, and he wants a divorce. Because she gave up everything, including her own family, to devote herself to her husband and his career as a prominent, wealthy attorney, she is left with nothing. She must now rebuild her life as best she can. With Kimberly Elise, Steve Harris, Tyler Perry, Shemar Moore and Lisa Marcos. Directed by Darren Grant. [1:56]

SEX/NUDITY 3 - A woman wears a short skirt that reveals her bare legs. Women wear low-cut evening gowns that reveal bare backs, shoulders and cleavage. Women wear low-cut dresses in many scenes that reveal cleavage. An elderly man looks at a magazine with a photo of a woman in a skimpy bikini.
► A man and a woman kiss in a few scenes. A man and a woman lie in bed together sleeping (he's bare-chested and we see her bare shoulders). A man and a woman sleep on a sofa together and we hear the woman saying that they had wanted to make love but he gave her intimacy instead.
► Men and women are shown dancing together. A man and a woman dance together holding each other close while we hear the woman's voice talking about how wonderful the man is and how much she cares for him. We see a montage of a man and a woman in different settings snuggling, having a pillow fight, wrestling, hugging, playing, dancing, talking, etc.
► An elderly man says, "I got Viagra" to a woman, an elderly man makes a suggestive remark to a woman about "opening the door" for him, and an elderly man makes suggestive remarks about a woman who happens to be a family member.

VIOLENCE/GORE 4 - A man and a woman argue, the man yells abusively at the woman, raises his hand to strike her, grabs her by the arm, drags her out of the house and shoves her out onto the front porch slamming the door in her face; she screams, kicks and protests the entire way. A woman pushes a man in a wheelchair, dumps him into a bathtub filled with water, he struggles to keep his head above water, he slips under the water and the woman props him up. A woman hits a man in the face, shoves a photograph in his mouth (he spits it out), and she leaves him sitting for a few days (he is in a wheelchair and unable to care for himself). A woman yells at and punches a man while he is driving a truck, he stops the truck, she forces him to get out of the truck and we see him standing in the middle of a road as she drives away. A woman hits another woman in the head.
► A man is shot, we see him fall to the floor, we see him on a ventilator in the hospital, and hear that his condition is grave. A woman shoots a gun into the ceiling scaring a man who runs out of the room holding his pants, as if he has been frightened into having an accident. A woman pounds on a door and a woman from inside opens the door abruptly while holding a gun. A woman pulls a gun out of her purse and waves it around in a few scenes
► A man yells at a woman and speaks to her abusively. A woman says that her husband hit her. A man threatens a man and tells him that he just shot a police officer during a drug deal gone bad. A man and a woman argue bitterly, two women argue bitterly and one lunges for the other. A woman throws a drink in a man's face and talks angrily to him.
► A woman with a saw cuts up furniture in a house while yelling at a man and a woman. Two women tear many garments in a large closet (we see the dressing room in shambles).
► We hear that a woman is a drug addict and see her in a few scenes acting jumpy and nervous. A woman yells, spins around and hallucinates after having smoked marijuana (a bad reaction with the lithium she had taken). Two men talk about drug dealing and a cocaine operation. A man flatulates.

MESSAGE - Let go of your pain in order to find your joy. 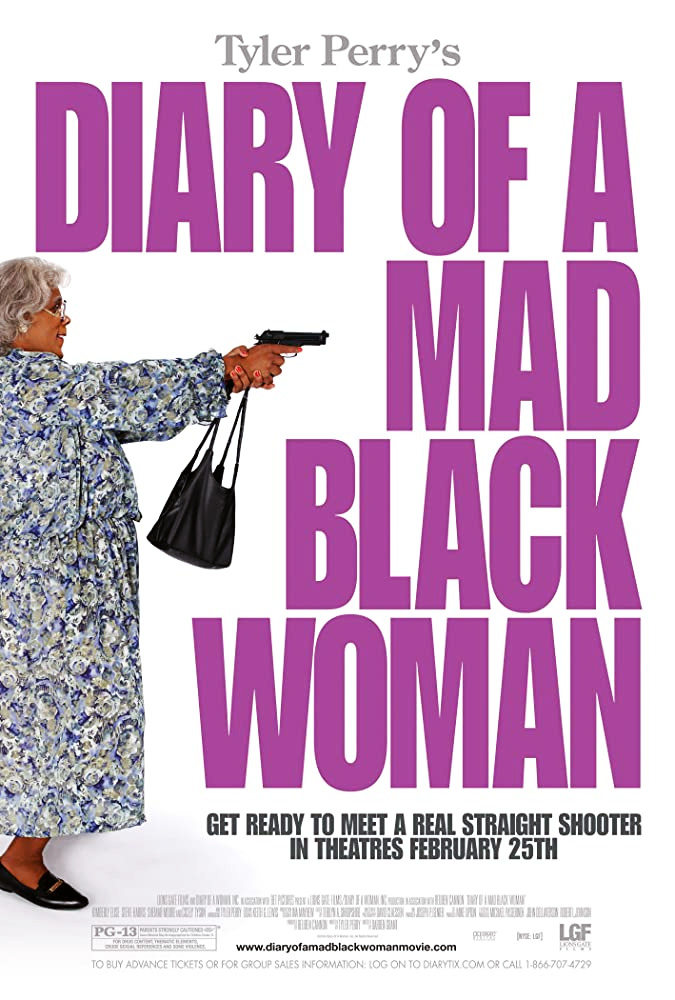