Denzel Washington stars as an ATF investigator trying to solve the mystery of a New Orleans ferry explosion, and he begins to suspect that feelings of déjà vu are actually warnings sent from the past. If he can unravel the clues in time, he may be able to save hundreds of innocent people from certain death. Also with Val Kilmer, Paula Patton, Bruce Greenwood and Adam Goldberg. Directed by Tony Scott. [2:08]

SEX/NUDITY 4 - Several people (including men) observe a woman as she goes about her daily routine, which includes bathing and changing clothes: We see her bare buttocks, back and part of her bare breasts as she undresses and steps into a shower, and she's shown in her bra and panties. Women wear low-cut tops that reveal cleavage in several scenes.
► A man is bare-chested while cleaning a wound on his shoulder. A man's pants are slung low and reveal his buttock cleavage when he bends over.
► A man tells another man to "go home and jump on whoever you got."
► A man and a woman hug.

VIOLENCE/GORE 7 - A man is shot in the head, gasoline is poured over him and he is set on fire (we see the shot and see the charred ground after the fact).
► We see a woman bound and in a chair, with a bag over her head, and a man pours gasoline on her and prepares to set her on fire; she then scratches his face, and he hits her hard and moves toward her with shears to cut her fingers off (we do not see the fingers being cut off).
► A man is pinned between two cars on a ferryboat, he shoots his gun at the person driving one of the cars, and he is in turn shot in the head; then one car is driven off the ferry and crashes into water where two people inside struggle to get out (one does not manage to get out).
► We see a female dead body on an autopsy table with bloody wounds and burned flesh and the fingers of one hand had been cut off (we are told that the woman was tortured). An alligator thrashes in the water and a human hand floats near it. We see many body bags lined up on a pier and dead bodies with bloody wounds. A man cleans the blood from a gunshot wound in his shoulder (we see blood on gauze and towels). A man walks through an empty house and finds blood on a sink, towels and the floor, and finds many bloody bandages in a garbage can.
► A ferryboat explodes, throwing many passengers in flames through the air (we see bodies floating in the water and survivors with bloody wounds and burned flesh). A man shoots at an ambulance that crashes into a shack; the man in the ambulance is shot but is not killed (we see a bloody bullet hole in his shoulder), tanks of gas are shot and there is a larger explosion.
► A man pulls a gun on a man, who shoots him, and he falls to the ground (he's not dead). A man with a gun approaches a woman, the man shoots a police officer repeatedly, and then many men shoot at each other. A woman with a gun threatens a man. Armed police storm into a house with guns drawn, but they find no one.
► We see hurricane damage and houses in ruins.
► A man yells at several people and slams a chair into a monitor screen.
A man describes murdering a man and a woman. A man is told that his partner was killed in a ferry explosion. A comment is made about prison rape.
► A man sits in a "transport machine," a green light flashes, we hear loud whirring, buzzing, and a pop, and we see him having a seizure on a stretcher in a hospital.
► A man with a gun threatens two men, steals an ambulance and drives recklessly. A man drives a car head-on toward a truck. A woman jumps from a pier onto a moving ferryboat.

SUBSTANCE USE - A man is shown smoking in several scenes, and a man makes a comment about "snorting hash."

MESSAGE - Everything you have, you eventually lose. 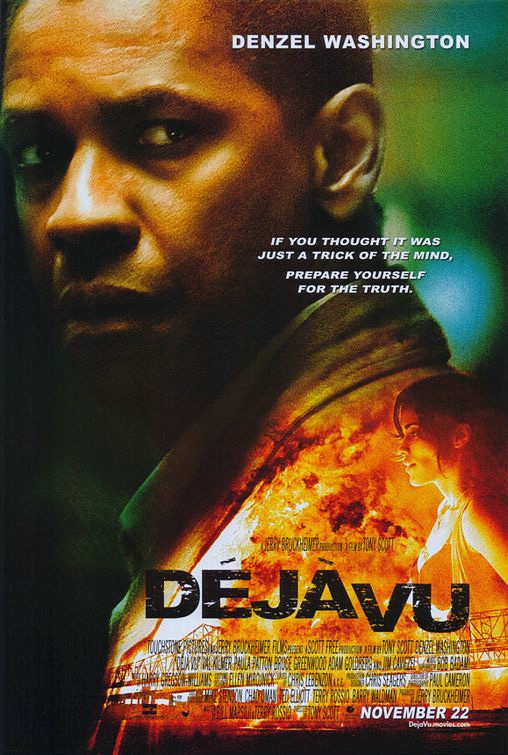