A British family at odds with one another gather for a funeral arranged by the deceased's son Daniel (Matthew MacFadyen), who does not expect any help from his famous-novelist brother Robert (Rupert Graves). When an unexpected guest turns up as the dead man's gay lover (Peter Dinklage), and amid a haze of hallucinogens, the family has to deal with blackmail, jealousy and each other. Also with Alan Tudyk, Daisy Donovan, Jane Asher and Keeley Hawes. Directed by Frank Oz. [1:30]

SEX/NUDITY 4 - A young man (he's nude and his bare chest and shoulders are visible) and a young woman (she's fully clothed) kiss and caress each other's faces.
► A young man at a funeral leers at a young woman several times, he follows her and finally asks her out on a date; she refuses, he grabs her face and kisses her, she pulls back and yells at him, her date witnesses the kiss and screams, and the scene ends.
► A young man, under the influence of drugs, removes his clothing and climbs on the roof of a house; we see him from the back and side, followed by several frontal shots from the waist up and back, and later we see a close-up of one of his bare buttocks. A young man wears boxer shorts with a suit jacket, shirt and tie, he leaves the room and he returns wearing pants. One young woman wears a dress that is low-cut and reveals some cleavage. An elderly man is shown sitting on a rooftop peak at night, naked and singing (we see him only from the back in a long shot).
► A man claiming to have been the homosexual lover of a young man's deceased father shows the young man photos of the two men; one photo is not shown to us but it is suggested that it is the picture of the two men having sex.
► A man thought to be dead is placed into a coffin with a dead man, who's thought to have been his gay lover, face down at the corpse's groin; the legs parted in spread eagle fashion.
► A young man leaning forward from the back seat of a car presses his face into the face of the young woman driving the car (her date is in the passenger seat), and it is unclear what his intentions are. A young man winks at a young woman; she grimaces and walks away.
► There are several discussions about a man being gay. An elderly man and a young man discuss women: the young man says he is sad because of a problem with a woman, and the elderly man talks about a long-ago girlfriend with whom everyone wanted to have sex. A young man tells a widow that she is relatively young and can remarry.

VIOLENCE/GORE 5 - A young man who's hallucinating from a drug he was given imagines a scratching noise and movement coming from a coffin, he stands up, gasping and yelling, he tries to open the lid, other mourners grab him, and the melee topples the casket and rolls the deceased out and onto the floor; we see the corpse's swollen, bluish hands, and the widow screams and cries and other mourners yell.
► Two young men struggle with a man, tie him up with curtain cords and gag him with a necktie, they force-feed him pills, and another young man drags him behind a couch, and throws himself on top of the man; the man gets up from the floor, still tied, and hops to the front of the couch, he gets up on the seat and bounces until he falls over and strikes his head on the coffee table (no blood) and the young men think the man is dead and put him in a coffin with a really dead man.
► During a funeral service, scratching is heard from the coffin, people panic, the scratching continues and a man pops up with wild eyes, flinging the coffin lid open, and he is wrestled out of the way by other men.
► A woman growls like an animal and charges a man, throwing him to the floor and beating him with her fists.
► A young man grabs another young man by the lapels and slams him into a wall, yelling at him for putting hallucinogens into a bottle marked "Valium"; he then runs to the bathroom to vomit (we hear sounds from outside the bathroom door).
► A young man talks to a woman at the funeral, describing how a man was stabbed in the neck and how the blood gushed out until he died. A young man becomes upset when he realizes that his deceased father was gay, and he discusses this with his brother and they argue. A young man under the influence of hallucinogens is nude on a rooftop and threatens to commit suicide by jumping off.
► Two men discuss funerals while one drives, and the driver nearly hits another car that speeds across his path at an intersection. A man and a woman in a car nearly hit another car that has sped across their path (the woman rolls down the window and yells at the departing vehicle). A car nearly hits another car that's pulling out.
► A coffin is opened and a young man states that the corpse is not his father (we briefly see a dead man in dress clothes inside the coffin); another coffin that does contain the young man's father is delivered (we see another dead man in dress clothes briefly). We see a funeral and wake scene with a closed casket. A young man and a young woman argue about an improperly labeled pill bottle and that another young man is hallucinating because she gave him a pill she thought was Valium. Two brothers have several arguments about money, jealousy, and writing. In reply to remarks that he spent too much money on airfare, a man jokes, "No matter how much the ticket costs, if the plane crashes, you're all dead."
► A young man picks an elderly man up from a wheelchair, pulls down the man's trousers to help him sit on the toilet, the young man pulls his hand away to show feces on his fingers, and then washes his hands in the sink and turns to show feces splattered on his face. A young man standing on a roof, leans over the edge, spits over the side, and sucks up the spit twice. A hypochondriac shows many people at a funeral a patch of skin on his wrist that is irritated.
► An animated white outline coffin travels along roads on a map, making wrong turns and circling back, until it reaches the correct house. An animated white outline coffin slides across a black screen and drops into a hole, the hole fills itself in and grass sprouts quickly over a grave.

SUBSTANCE USE - A young man force-feeds another man hallucinogens. A young man is shown in his home designer-drug lab, smoking, and there are medicine bottles strewn about as he weighs hallucinogenic pills and places them in a bottle that says "Valium"; another young man takes some of the pills. A young man under the influence of hallucinogens is nude on a rooftop and threatens to commit suicide by jumping off. A bottle of hallucinogens marked "Valium" drops on the floor, is found by a young man who takes one, he drops the bottle and an elderly man in a wheelchair finds it (the young man wobbles on unsteady legs through the rest of the film, raising his hands above his head and grinning, while the elderly man is shown sitting on a rooftop peak at night, naked and singing). A young man hallucinates, he giggles and rolls his eyes, moving in slow motion as he points to objects along a road, he stumbles in slow motion, pets wire statues, examines a leaf that has fallen from a tree, enters a house, embraces a woman, nearly falling, and plays with a feather on her hat. A young man smokes cigarettes in a few scenes.

MESSAGE - You never know what may happen at a funeral. 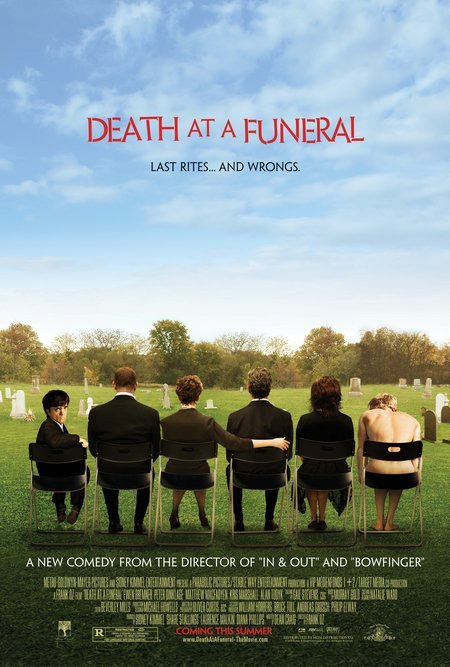