Why is “Dangerous Lies” rated TV-14? The TV Parental Guidelines Monitoring Board rating has been assigned for “some material that many parents would find unsuitable for children under 14 years of age.” The Kids-In-Mind.com evaluation includes some passionate kissing, an implied sex scene, several cleavage revealing outfits, several scenes of murder by gunshot with some bloody wounds shown, a couple of dead bodies discovered, many arguments that include yelling and shoving, and some moderate language. Read our parents’ guide below for details on sexual content, violence & strong language.” A debt-strapped couple (Camila Mendes and Jessie T. Usher) is surprised when the wife inherits an estate and cash from her deceased healthcare client. They are then accosted by a series of opportunists and home break-ins, while a Chicago police detective tries to sort out the situation and the husband and wife argue, accusing each other of greed and criminality. Also with Jamie Chung, Cam Gigandet, Sasha Alexander and Elliott Gould. Directed by Michael Scott. [Running Time: 1:36]

– A man and a woman are clothed as they kiss passionately and he carries her to their bed where she straddles him as he sits on the edge of the bed and they kiss in a longshot while she sways back and forth and the scene cuts to the morning (sex is implied). A woman sits on a man’s lap in a car, they kiss briefly a few times, and they go inside a diner where she works.
► A man and a woman both say, “I love you” to the other in two scenes. A woman wears crop tops that reveal her bare abdomen with a long skirt that is slit to below the knee (we can see the outline of the top of her bra in one scene). A woman removes her top in a bathroom and reveals her bra and cleavage.

– A woman holds another woman at gunpoint and shoots at another woman (she misses), who rolls to the floor and shoots the first woman dead (we see some blood spurt out bloody wounds in her back as she falls). A man grabs a woman and holds her at gunpoint with one arm around her neck while demanding diamonds; he slaps her hard, she falls to the floor and gets up uninjured as the gunman points the handgun at the woman’s husband as he appears with a handgun pointed at him and the two men shoot at each other; we see several bloody wounds in the first man’s chest as he falls dead and a shot strikes the husband and he falls (we see no blood) and dies. A man in the back of a diner sees a robbery in the front with a dead man on the floor covered in blood; the robber shouts and points a handgun at a man while pushing a woman and she falls to her knees and cries while the man in the back tells his wife (a server) to stay there, grabs a skillet and hits the robber in the stomach and on the head twice; we later hear that the criminal was in jail until he was stabbed to death in his cell by an unknown assailant. A man walks upstairs in a house and we hear a gun cocked off-screen; the camera cuts to a man holding a handgun and his wife demanding to know why when the husband steps out the bedroom door and points the gun at another man, who trips on the landing, falls downstairs, and dies.
► A man goes into his house and hears glass breaking, he goes to the back door, finds it ajar with the glass broken out and glass shards on the floor and someone hits him on the back of the head; we later see a circular wound on the man’s head, dripping some blood as he tells his wife about the attack and she is frightened. A woman examines a living space above her garage and finds a body on a high shelf, covered with a tarp, as well as with uncashed checks (we see a discolored and decayed hand and wrist of the corpse); the woman finds a handful of diamonds on the floor and her husband convinces her to keep them telling her that another man was a criminal who killed the person in the garage. A woman finds an elderly man dead in his chair in the attic.
► A man puts a tarp-covered body into his car trunk and drives away (we never learn what becomes of the body). A man burns medication logs for a now deceased man and uncashed checks and check stubs in a fireplace.
► A man who claims to be a real estate agent demands to buy an elderly man’s house and his caregiver refuses; the man follows and watches the caregiver and her husband everywhere they go, especially to the bank. A woman argues with her male boss a few times and he comes to her house one night, shouting and pounding on the door; she opens the door and pushes him away, but he continues to shout, escalating to a scream, and threatens to call the police when he leaves. A wife and her husband argue many times about money and she suspects him of murder and theft. A man argues with a police detective a few times. A husband tells his wife that he is being followed. A detective tells a woman that she is investigating the woman’s’ husband in the murder of an elderly man and a diner robbery. A man goes to a house repeatedly, harshly demanding that a woman sell him the house, but she refuses and tells him to leave. A detective suggests to a woman that her husband and a shooter at a diner knew each other; the wife is startled and becomes suspicious. A man tells a woman that her husband stole money from their safety deposit box and that the police have a search warrant on her house. A woman confronts her husband about some missing cash and he tells her that the real estate man is a jewel thief recently released from prison and is likely a murderer. A man writes a $7,000 check and gives it to a woman; she and her husband argue about it, but he convinces her to keep it. A woman is told that a deceased man left a will and that she has been left everything.
► We see an aerial view of a cemetery and funeral chapel and inside the building, an urn of ashes is shown on a table and a man and a woman drink a toast using tea; there are no other mourners. A woman becomes a caregiver for a wealthy elderly man who says he keeps hearing noises in his house during the night; he carries a baseball bat downstairs one night and finds the woman sitting on the porch and she takes the bat and puts it down.
► A man flosses his teeth at a washroom mirror for several seconds (we see no debris).

– 10 prescription bottles are shown on a small table as a health aide records their daily use and portions out doses from a large pillbox divided into days of the month (she sees that one bottle is nearly empty and later discovers that a man poisoned her client, killing him). A man and a woman drink from beer bottles in front of their house, and we see three beer bottles on a table as a woman sips from a glass of beer.

– Beware scammers and burglars who target the estates of the deceased. 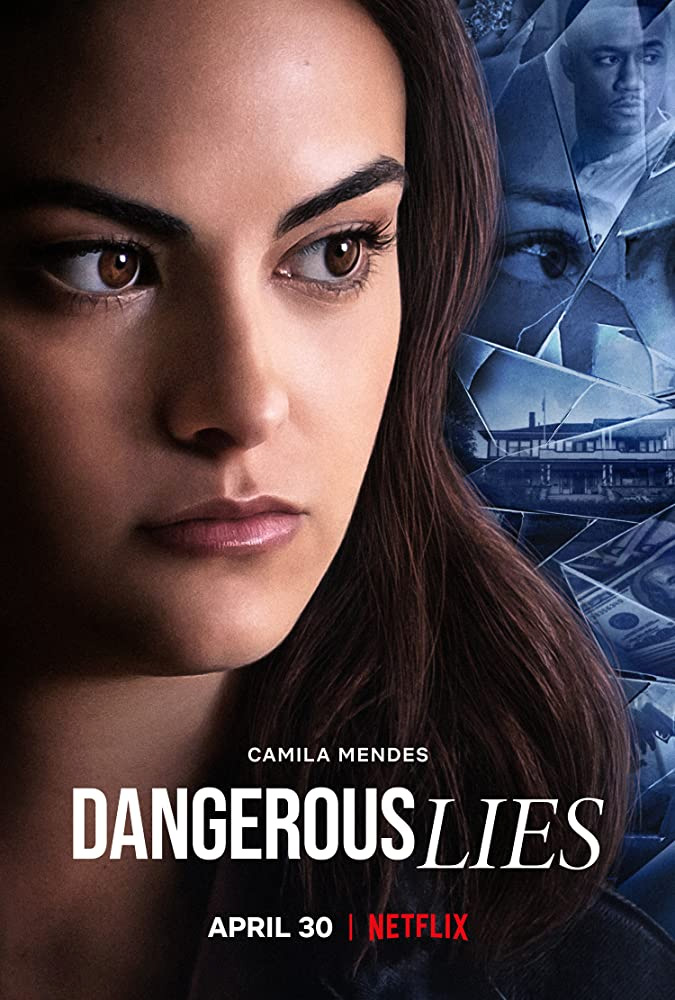