Lives intersect in this drama about people of different cultures, who contend with U.S. Immigration laws and issues like border-jumping, naturalization, deportation, and obtaining U.S. Citizenship. An immigration officer (Harrison Ford) searches for an illegal Mexican woman whose child has been returned to Mexico. Also with Ray Liotta, Naomi Judd, Cliff Curtis, Jim Sturgess and Alice Braga. Directed by Wayne Kramer. [1:53]

SEX/NUDITY 8 - A woman and a man are seen having sexual intercourse (the woman is on her hands and knees the man is thrusting; we see her bare breasts, stomach and legs, and we see his bare back and legs and the side of his buttocks).
► A man is shown on top of woman, he moves and we see her bare breasts. A woman (we see her bare breasts, bare stomach and bare legs) is seen lying in bed in multiple scenes. A man and a woman talk for long periods of time while nude: the woman's bare breasts are shown as well as the man's chest and the sides of his hip and thigh. A woman wears a nightgown that reveals the outline of her breasts.
► A man is shown on top of a woman, we hear him moaning and breathing heavily (we see his bare back and chest) and it is implied that he has just climaxed. A man lies on top of a woman and they kiss passionately (we hear a zipper unzip but they remain otherwise clothed).
► After having had sex with a married man, a woman is seen crying while sitting in a shower (we see parts of her legs, chest and arms). A woman flirts with a man and wears a low-cut top revealing cleavage.
► A man grabs a woman's hair and says, "I want you down on all fours at the edge of the bed." A man says to a woman in a bar, "Come home with me." A man propositions a woman for sex in exchange for a Permanent Residency card (Green Card), and a man questions a woman about using sex as an exchange for U.S. citizenship. A man calls a woman a "sex machine," using a derogatory term. A man complains to a woman he is having an affair with that sex with his wife "used to be hot" and that it's easier to masturbate (he uses a crude term) in the shower than rub her back for half an hour. Using a crude term, a woman calls herself a "rubber sex doll." A woman tells a man that having sex with him disgusts her. A man is upset and asks a woman, "Was he inside of you today?" A man asks a woman how many times she has had sex with a married man and she replies, "As often as he wants." A man yells and cries and talks about a woman having sex with a man (using a crude term).
► A man flirts with a woman in a few scenes. A married man and a woman arrange to meet for sex in motel rooms.

VIOLENCE/GORE 7 - A man shoots another man five times in the chest and abdomen (we see bloody bullet holes and he falls to the floor). A man shoots another man at close range in the head (we see a large amount of blood splatter behind him, onto the wall). A man puts a pillow over a screaming woman's face, pushes her to the bed, and shoots her at close range (we see a small amount of blood through the pillow). A gang member shoots a man in the head at close range (we see the blood splatter behind him and he falls to the floor).
► A man is seen lying dead on the floor with a bloody bullet hole in his head and a large pool of blood next to his head; his wife kneels down, cries and screams. A man and a woman are shown in close-up in body bags in a morgue (they both have purplish-red bullet holes in their foreheads).
► A gang member shoots a shotgun at a woman in a store (it is unclear whether she is struck). An immigration agent has a shootout in a store with a gang and multiple shots are fired. Gang members in masks rob a convenience store and hold guns to people's heads while they threaten to kill them and yell multiple obscenities (the people in the store cry and scream). A man holds a woman in a headlock and holds a gun to her head (she cries while he screams obscenities at her and threatens to kill her). A man holds a gun to a woman's head and cries, "I'm not a murderer" (the woman has splattered blood on her face and the front of her clothing).
► A border official finds the dead body of a young woman in the desert (we do not see her face but we see a dried blood stain on her chest and her bare foot).
► A man is upset when he learns his sister has been murdered. A man is upset after viewing his sister and her lover's dead bodies. A man sobs over his murdered daughter. At a funeral, family members cry over a dead woman.
► In multiple scenes, immigration agents raid workplaces and arrest illegal immigrants: people scream, cry and run as the agents shove, tackle, push, chase and handcuff them. I.M.E. Agents push a man up against a wall while they search his home. A teenager's room is searched by the F.B.I. because they believe her to be a suicide bomber and a sympathizer of the 9/11 hijackers.
► A teenage boy bumps into a teenage girl's shoulder and calls her a derogatory name for a Middle Eastern person. Teenagers call a teenage girl names and mention dynamite, TNT, and call her derogatory names for Middle Eastern person. A teenage boy calls himself and his family a derogatory term for Asian Americans. A teenage girl talks about the 9/11 hijackers, saying, "Upon impact their voices were finally heard." A teenage girl cries when an FBI agent declares, "your family has no status." A man grabs his son, shakes him, and yells in his face. A fifteen year-old girl speaks to her class about terrorist attacks, 9/11, Jihadists, and the students yell at her, call her names, and she cries. A young woman condones the actions of the 9/11 terrorists and talks about the planes striking buildings. A man yells at another man, "You're a cold-blooded murderer!" A woman mentions a young girls' mother who's dying of AIDS in Nigeria. A woman jokingly says to a man, "Play the Jew card."
► A woman is upset and begs a man for help when she is arrested, claiming her son will be left on the street. A woman is upset when she sees her husband arrested for immigration fraud. A married couple cries upon learning that their family must be separated. Two women argue over a 15-year-old girl being deported. A mother, father, and daughter cry in an airport as they are deported. A man delivers a dead woman's purse to her parents and child and they all sob. A mother visits her detained daughter and they sob and embrace. Two small children visit their older sister and they all cry and embrace.
► Two boys push each other around as they play video games. Korean gang members push a teenage boy around, get into a car where they show him guns, and discuss a robbery they are planning. A woman pulls out of a parking space and crashes into a man's car (no one is injured).

MESSAGE - The American Dream, and the desire to live freely in the U.S., is something people are willing to die for, sacrifice their families for, gain illegally, take for granted, or work hard for. 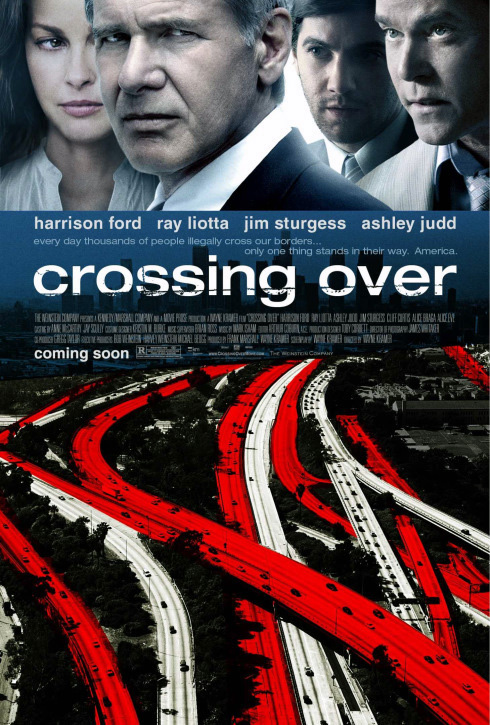