Why is “The Contractor” rated R? The MPAA rating has been assigned for “violence and language.” The Kids-In-Mind.com evaluation includes a reference to sex, a couple of kissing scenes, a partially nude man in a non-sexual context, several murders by poisoning, explosions, deaths by gunshot, strangulation, bludgeoning and stabbing, a building set on fire, several gunfire scenes with unarmed non-participants being shot, discussions of military service and discharge, and nearly 30 F-words and other strong language. Read our parents’ guide below for details on sexual content, violence & strong language. When a skilled soldier (Chris Pine) is discharged without benefits from the army, and cannot support his wife and son, he takes a job as a military contractor. He soon realizes that the mission involves assassinating innocent people and he’s expendable, and that’s when he decides to go after his employer (Kiefer Sutherland). Also with Gillian Jacobs, Sander Thomas, Toby Dixon, Ben Foster, Tyner Rushing and Nicolas Noblitt. Directed by Tarik Saleh. [Running Time: 1:43]

– Police officers surround several people after a break-in and gunfire is exchanged: a man is struck in the leg (we see blood), a few others are struck (we see blood spray), a woman is grabbed by officers, she yells and she is shot along with the two officers (blood sprays). People on motorbikes open fire on a busy bridge and several people are struck and fall to the ground, one man runs away and is chased by people on motorbikes and other men on foot shooting at him; one motorbike falls down an incline and another man on a motorbike is struck in the head with a cinder block and falls. A man hides in a dark drain and other men look for him: he fights with a couple of the men, shoots one, rats skitter and squeak nearby, the man punches one man in the face and pounds him with a rock a few times (we see the man’s bloody and broken face), and another man is shown with a bloody head wound and a knife sticking out of his chest. A man is shot in the head from off-screen (blood splatters and he lies on the floor with blood pooling under his head), several armed men surround a cabin and a man inside sets a trap, jumps out a window and slides down a tree as the gunmen enter the cabin, which explodes. A man inside a laboratory is bound and questioned, he is placed on his knees where a man injects him with a hypodermic needle and the man slumps to the floor twitching briefly as the building is set on fire; we see another man lying on the floor as a flammable liquid on his back and the floor ignites. Two men with guns enter a compound and shoot at several people (blood splatters) as a person inside a building shoots one of the men twice (we see blood); a man fights a few people inside the building, strangling one and shooting others, and a man sits on the floor with a bloody abdominal wound before being shot dead. A dead man is shown engulfed in flames as a car he sits in burns.
► Two men swim underwater through a drain while being chased by police officers; one man hooks up an IV to give the other blood (we see the needle entering the man’s arm) after he was shot (we see the bloody wound). Several people arm themselves for a mission and move through the woods toward a lab compound, and one man holds a gun on a security guard; they bind his hands and take him at gunpoint inside the facility. A man is stranded and unable to walk from a bad knee injury (he moans and grimaces). A man forces his way into a woman’s home and takes her and her son in a car to get information; he holds a gun and threatens the boy. A man with a gun on a roadside threatens another man in a car and when he gets into the car, the driver jabs him with a hypodermic needle that sedates him. Two men argue, one holds a gun on the other, one shoves the other and threatens him, and one man holds the gun to his own head (the scene ends). A man wakes up strapped to a bed and with monitors and IVs attached to him; he tries to break free and another man tells him that he tore his ACL.
► A man cleans and loads a gun in a few scenes. A man speeds on motorcycles in a few scenes. A man watches and films a man and his family for several days; he hides outside his house and stands in the rain for hours. A man swims through a drainpipe and walks through the woods where he hears gunshots and sees a truck; he smears himself with mud for camouflage.
► A man is discharged from the service after his blood test came back with evidence of unacceptable amounts of drugs (seemingly for pain from a knee injury); he is told that he will not receive his pension or health insurance. A man describes finding a young boy chained to a wall with several girls in the next room “all strung out.” A woman tells her husband that a man is gone and says that she will not go to the funeral; we see people gathered around the grave and understand that the man committed suicide. A young boy asks a man if it is true that he saved his father’s life. A man tells someone on the phone, “We are all in danger.” A man stands outside his house and appears alarmed when he looks around as if he sees or hears someone. A man says, “I don’t believe in God, I believe in science.”
► People pray in a church service for military men being sent to war. A man swims and then puts on a knee brace on and runs. A man teaches his young son to swim and the boy is obviously afraid.
► A man has a very deep and craggy scar on his knee that we see several times throughout the movie; a comment is made about his knee being “shredded.” A young boy is shown getting a tattoo on his arm and blood trickles as tears run down his face. A man spits in his hands and wipes blood off his face. A man tells another man, “Your blood came back filthy,” after a substance test. A large pig in a cage is wheeled into a laboratory at night.

The Contractor SUBSTANCE USE

– A man fills a hypodermic needle with a medication that we do not see, but we understand it is for pain from a knee injury, a man tells another man that his blood came back “filthy” and lists a number of drugs found, and a man injects himself in the knee and the shoulder in a couple of scenes. A man tells a young boy that he pulled his father out of a bar once, two men drink bottles of beer, a man drinks a beer, and a man declines a beer when a man offers him one. A man smokes a cigarette outside his house, and we see many cigarette butts in an ashtray.

– Mercenary missions are full of ethical pitfalls and compromises. 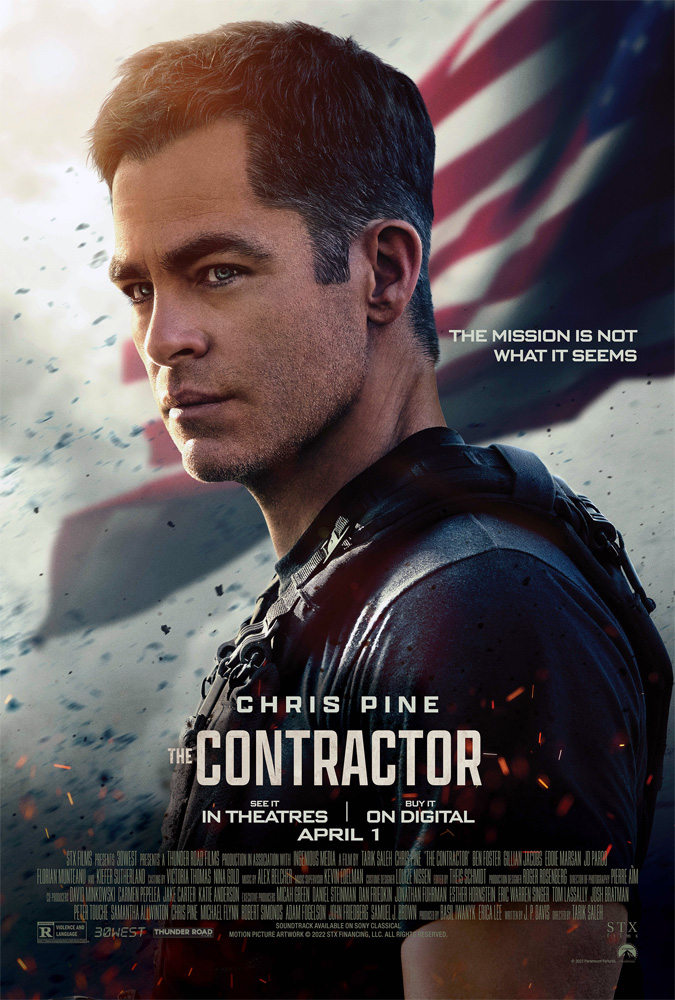