A handyman and ex-con (Josh Stewart) attempts to burglarize his employer's home, but instead encounters a house full of deadly traps. Becoming a reluctant hero, he has to save the family he planned to rob. Also with Madeline Zima, Michael Reilly Burke, Andrea Roth, Juan Fernandez and Robert Wisdom. Directed by Marcus Dunstan. [1:26]

VIOLENCE/GORE 10 - A teen boy walks into a room loaded with bear traps: they clamp onto various parts of his body, ending with one clamping onto his head, killing him.
► A layer of acid coats a floor, eating away at a man's shoes and burning his feet; a cat lands in acid and starts to dissolved, and it then leaps onto a window frame and is sliced in half by a guillotine-type device (we get a glimpse of the bisected cat in the acid).
► A man is hanging from the ceiling by hooks through hands; there are many hooks in his flesh, holding him to the wall, another man slices his forehead with a knife, and takes a hammer and chisel to the man's teeth, knocking one tooth out -- which we see in close-up. A man attached to a wall by hooks in his flesh strains against the hooks to free himself, tearing his flesh.
► A woman is impaled and falls down a flight of steps: she is dragged away by her ankle and a man sews her mouth shut with an upholstery needle (we see her with her mouth sewn shut). A woman is chained in a bathtub; her hands are tied, she is blindfolded with duct tape and staples, she is covered in blood and the water in the tub is blood-tinged. A mechanical device hurls a teen girl into a wall of spikes.
► A man runs a knife blade through a teen boy's hand and the blade cuts off all the fingers of one hand. A knife is slashed at a chained man's head; in the dark it's difficult to see the damage but his ear may have been cut off. A razor device slices a man's hand, leaving it trapped against the blade for a few moments and bloodies the hand severely.
► A man, bloodied and suffering, is found chained to a chair (he is so bloodied it is hard to tell how severe his injuries are). A man uses a dead man's head as a battering ram, to knock down a door, creating a bloody mess. A man wounded in a car crash is stabbed in the head with a knife.
► A man forces another man to hold his hand and arm above a flame and we see his arm hairs burning away. A man holds a woman's tongue with a pair of pliers and threatens to cut it with tin snips. A teen girl is tied to a banister with barbed wire around her neck, and chained by the hands. A man, bloody and wounded, is thrown out of a room by something unseen. A man is electrocuted by a TV set in water.
► A metal spike in telephone earpiece injures a man's ear. Razor wire hits a man's cheek, drawing blood. A man gets fishhooks in his face and one is near his eye; he pulls them out.
► We see what appears to be a beheaded body, wrapped in plastic and hanging upside-down; we also see many shots featuring bloody and dead bodies and another view of a dead body in bathtub. We get a glimpse of a pile of entrails. A blood-covered woman steps into a pool of blood. A man covered with blood moves toward a little girl, making her scream. A large box is opened to reveal a bloodied and panicked, chained man. A man punches a window out with his fist, bloodying his hand.
► A woman is thrown onto bottles, breaking them, and is grabbed by a man. A man slams another man's head onto a tile floor and they struggle violently. Two men wrestle and fall down a flight of stairs. A man is struck by a police car, and is thrown over its hood. An ambulance overturns and its occupants are thrown around; a man is suspended from the ceiling of the overturned ambulance by restraints, and he then falls to the floor of the ambulance and is hurled outside.
► A vicious dog chases a girl; it snarls and shows its teeth and grabs at her leg, but the girl gets away. A ferocious dog scratches a man's cheek with its teeth, leaving a bloody scratch.
► A man with a knife threatens a little girl. An injured man is put into another man's van and is driven away. A police officer points a gun at a man. A man throws a wastepaper basket that's on fire at another man. A man fires a shotgun. A house explodes. A man holds a knife threateningly and a man throws a knife.
► A man is grabbed from behind by something we can't see. An elaborate mechanical snare grabs a man by the ankle and drags him out of sight. Hundreds of tripwires and booby traps are planted throughout a house. Whimpering noises and screams are heard through an air duct in several scenes.
► We see several large spiders throughout the movie. Wasps from a nest attack man (he is not harmed). A woman sticks a syringe into her forehead (it could be a Botox injection).

SUBSTANCE USE - A man in a bar swigs a beer and bar patrons drink and smoke. A man smokes a cigarette frequently throughout the movie, and a man shares a cigarette with a teenage girl.

MESSAGE - You never know when you'll have to do save someone you planned to rob. 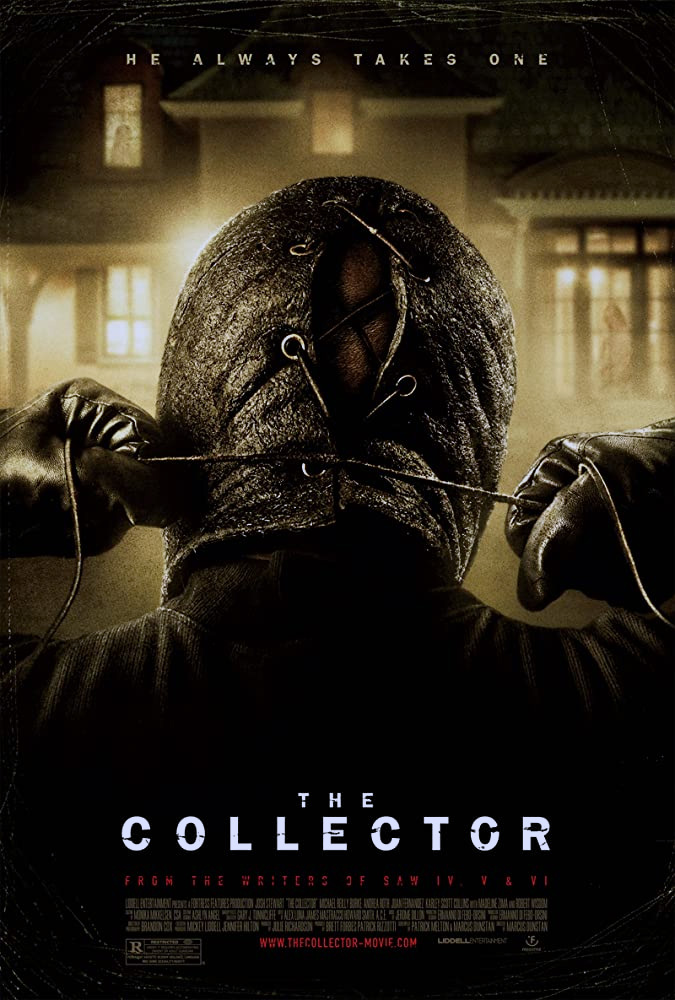