SEX/NUDITY 5 - A man and a woman kiss passionately in the back seat of a car: he takes off his shirt revealing his bare chest, he is shown on top of her as they continue to kiss, and we hear heavy breathing (sex is implied but not seen).
► A man pulls a woman's gown from the back, revealing cleavage and it is implied that sex will follow. A man tells a woman, who is dressed like a boy, that he's not used to undressing boys as he starts to remove her outer layer of clothing (sex is implied but not seen). A man and a woman kiss and embrace; he takes off her top (revealing a full slip) and mentions that it's easy to undress her (it is implied that they will have sex).
► A drunken man, referring to himself as big and bad like Bluebeard, climbs on top of a woman in bed and kisses her (they are both clothed): she makes it clear his advances are unwelcome, he proceeds to talk about geishas, explaining how they tend to men, she refers to them as slaves, he calls her his little geisha, and kisses her starting from her abdomen and making his way up to her chest.
► A man kisses and presses his face into a woman's cleavage (her breasts are not exposed). A man rubs a woman's shoulder and caresses her face, he kisses her neck, and they kiss passionately. A man and a woman kiss as the man caresses her face. A man kisses a woman's neck and cleavage in the background of a party scene. A man kisses a woman's shoulder and neck. A clothed man and a woman kiss passionately on a bed and they roll off and onto the floor.
► A bare-chested man and a woman (clothed) are seen talking in bed. A man hugs a woman from behind. A man picks a woman up in his arms.
► A drunken man tries to seduce a woman. A woman approaches another woman from behind and good-naturedly hits her buttocks with her hand (not as a come-on, but as a way to surprise her). Adult partygoers play hide-and-seek and chase each other, grabbing each other and cheering when a person is found.
► To make herself more comfortable, a woman pulls off her corset, revealing a camisole underneath (the camisole fits tight to her breasts, revealing the form of her nipples for a moment). A woman (presumably a prostitute) is shown wearing a cleavage-revealing camisole with one strap falling off her shoulder. A woman lifts her shirt (we don't see anything). A costume is sewn for a woman who wants it to be sexy and to feature her thighs and breasts; she is told that being covered up is sexier because it leaves more to the imagination and she later admits that the outfit "drives them wild." A costume party scene includes outfits revealing cleavage and one partygoer in a bathing suit top.
► As a woman and a man dance, the woman tells him that every woman is looking at him. Two women sing and collect money at a saloon, where we see prostitutes and a man grabbing and kissing a woman in the background.
► A woman remarks that a man likes seeing her work on all fours. A man accuses a woman of "whoring around." A woman performs a saloon song, in which the lyrics refer to her as "Torpedo girl" and beckon, "touch me, touch me, but beware…"; later, a man sings the same song as he is having a romantic encounter with the woman. A woman jokes about having sex with a jockey; she says he mounts her like a chimp, and it's exhausting and she makes a comment that he is well endowed, inferring that that is a characteristic of all short men. A reference is made to a woman "making out," and a man getting "a pretty girl in bed." Two women have a conversation about sex, expressing that it's "too bad you need a guy for that," and they also comment that the only thing good about love is making love. A woman says she may prefer women, and that skin is skin if she shuts off the light. A woman finds out that her lover is marrying another woman for money. A woman is referred to as a man's "latest catch." A woman says it's better to be a mistress than a wife. A reference is made to a man "two-timing." A reference is made to a lover being more like a husband. There is dialogue stating that a woman in love is a woman with her tongue hanging out and slobbering. A reference is made to stealing a mistress, and letting a fox into the coop. A man is referred to as being "born a bastard." An actress, who is portraying Joan of Arc, is teased for playing a virgin. A woman refers to herself as a cheap date. A man asks another man if he can borrow a woman for a few days. There is a conversation that infers that one doesn't need to get married, and marriage is merely a social convention. A woman reveals that her mother stupidly married for love, and that her father cheated on her mother. A woman says she feels naked without a corset. A woman is described as looking like a whore. A woman is referred to as a tart. Prostitutes are referred to as "hookers." A woman is referred to as "Queen of the Night." A dance performance is said to not be a "striptease."

VIOLENCE/GORE 2 - A woman finds out her lover has had a fatal car accident and the crashed car is shown off the side of the road (no blood or bodies are shown).
► A man and a woman have a verbal fight, which includes shouting "shut up," name-calling and using put-downs. There is a conversation about parents dying and that the adult child is happy about it. A woman says that her mother is dead. A reference is made to a person rotting in jail and someone dying poor, as well as poor people being happy. A woman uses the expression, "Over their dead bodies." A woman says, "Let them die." A man exclaims that the woman driving his car needs to brake or she'll end up killing them. Suicide is briefly mentioned in dialogue. A woman refers to ending up "retarded" and says her parents beat and starved her. A reference is made to a child being hit by an aunt. A woman steals costumes from her former employer and says that the bastard asked for it.

SUBSTANCE USE - We see a saloon scene featuring a large group of people drinking and smoking cigarettes, adults consume champagne in many scenes, a party scene shows several guests drinking and acting tipsy, brandy is consumed, a man drinks from a wine bottle, a man chastises a woman for getting another man drunk and mentions that he drank three bottles (presumably of champagne), a man says "Let's drink" to his companions at a saloon, a drunken man tries to seduce a woman, and a man is referred to as a drunk. Adults light up and smoke cigarettes throughout, and a man (in the background at a racetrack) has a cigar in his mouth.

MESSAGE - Having a unique vision and endless determination can transform a person's life, enabling them to overcome even the most tragic circumstances. 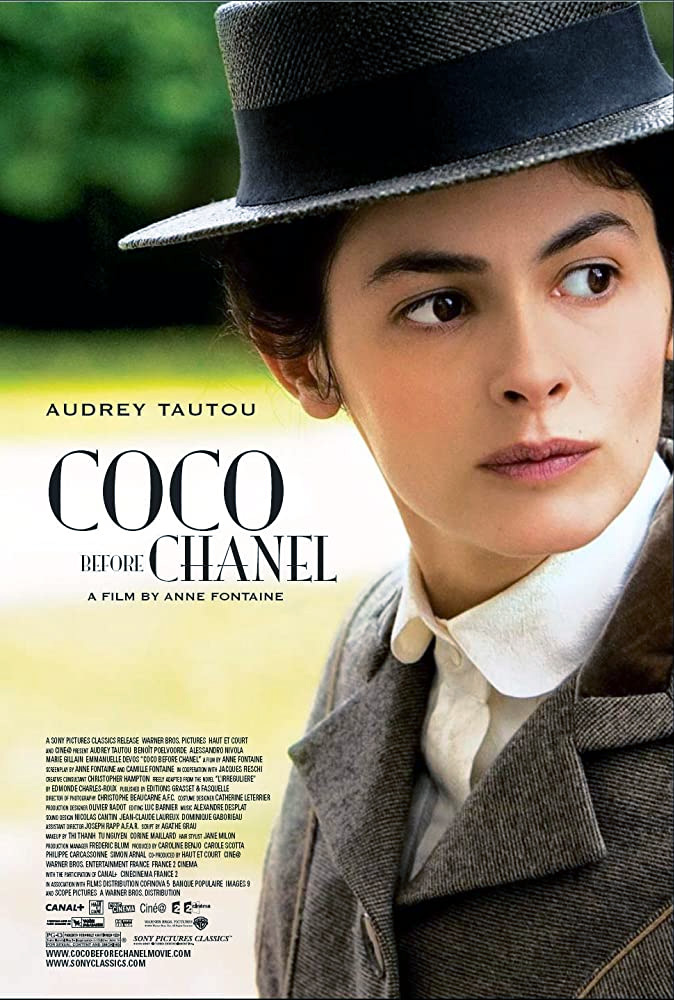