Johnny Depp stars as the eccentric genius confectioner Willy Wonka, in this remake of the 1971 children's film "Willy Wonka & the Chocolate Factory," which was based on the book by Roald Dahl. Wonka, who has been living a reclusive life within the walls of his chocolate factory for many years, opens the doors for five children who have found a golden ticket in one of his candy bars. At the end of the day one of the children will be selected to win a very special prize. Also with Freddie Highmore, David Kelly, Helena Bonham Carter and Deep Roy. Directed by Tim Burton. [1:46]

SEX/NUDITY 3 - We see chocolate statues of women with bare breasts. A woman wears a low-cut top that reveals cleavage. Someone steps into a shower (we see bare legs below the knee). Several very small men (Oompa-Loompas) are in tribal garb (grass skirts and bare-chested). A mannequin is stripped of its outer clothing leaving only a bustier and stockings that reveal thighs and cleavage.
► A man and a woman kiss tenderly.
► Two elderly, married couples sleep in one bed together (there's no sexual connotation whatsoever).
► A woman looks at a man after he makes a comment about the amorous effects of chocolate. A man yells out to a girl, "Don't touch that squirrel's nuts."

VIOLENCE/GORE 4 - A man with a butcher knife (in a reenactment from the film "Psycho") stabs at a boy who has been reduced in size, and the boy is then tossed into a frying pan (his father reaches in and pulls him out and he's fine).
► A girl walks toward a squirrel, reaches out for it, and many charge toward her, knock her to the floor, cover her with their bodies swarming all over her, drag her toward a garbage chute and push her in, followed by a half eaten fish, an oyster shell and a piece of bad meat; we hear that there is a horrid smell and that she will end up in the incinerator -- her father is pushed in after her (we see them both covered in garbage later).
► Dolls catch on fire when they are hit by fireworks, we see them in flames, we see their faces melting and one doll's eye pops out of the socket (we later see a badly singed doll on a stretcher in a "burn center").
► A girl does karate, and knocks out two men with rapid and repeated punches and kicks. A boy runs through people knocking two to the ground. We see people whipping a cow (we hear the cow mooing and hear the whips cracking) and are told that's how whipped cream is made (there's no gore and the cow seems fine).
► A boy falls into a chocolate river, he struggles to stay afloat, he is sucked into a large tube, pushed up the tube, gets stuck, and then he is forced through it and into a metal container (we see him later coated in chocolate but otherwise fine).
► A man with a machete hacks through a thick jungle, he is chased by a large insect, and he slashes the bug in half (we see the remains of the bug on the ground and the man licks his knife to taste the bug goo).
► A girl's nose turns purple, it spreads to her face (we see small veins of color spreading in her skin), then her hands, then she begins to expand and blow up like a large balloon (we see her purple abdomen and belly button) and then we hear that she will be rolled to the "squeezing room" (we see her very limber but still blue later).
► A boy is lifted into a tube, there is a bright flash of light and the boy appears in a television screen; he is pulled out of the TV, remains very small and we are told he is taken to the "stretching room" (we see him later very tall and flat).
► A castle made entirely of chocolate begins to melt, chocolate dollops fall on the heads of a man and a woman who are sitting inside, and then the chocolate begins to pour down on them; the structure eventually crashes in and the two people run for cover (we see them later covered in chocolate but unharmed).
► A glass elevator shoots straight up into the air, crashes through a glass ceiling and roof, continues upward, and then begins to fall to the ground (the people inside are frightened that they will crash into the ground). A glass elevator crashes down through the roof of a house knocking rubble and dust into the house. A man walks into a glass elevator a few times and is knocked to the ground. A glass elevator speeds up, down, across and over in a few scenes.
► People crush together in markets and stores while trying to reach and purchase bars of chocolate. People sail in a large candy boat along a chocolate river, they speed through tunnels, they spin around (as in an amusement park ride) and then dock.
► A man tells children not to chew a piece of candy or "you'll break all of your teeth off," a man tells children to put on sunglasses or the light could, "burn your eyes out of your skull." A boy plays a video game and yells "die, die, die" while he shoots characters on the screen.
► A man has flashbacks to his childhood in several scenes: we see him with very elaborate braces and mouth gear that make it difficult for him to eat, the boy's father (who’s a dentist) burns his Halloween candy in the fireplace, and he and his father argue, and the boy runs away from home. A boy runs away from home then returns to find the house missing (it appears to have been demolished but we see it elsewhere later).
► We see a part of a scene from "2001: A Space Odyssey," where hominids are agitated and surround a monolith while banging on the ground. Heavy music accompanies the opening credits as we watch chocolates being produced in a factory (pressed, poured and extruded) and long metallic legs wrap the chocolates in paper and close them.
► A man mashes up a bowl full of caterpillars and other bugs making a green slime that another man tastes and gags. A boy stuffs sweets in his mouth, he is covered with goo, he falls to the ground, pulls up candy grass, eats handfuls of it, a woman eats something red, and then when she smiles we see her teeth and mouth covered with red goo. A man puts a candy egg in his mouth and when he opens it we see a chocolate bird flapping its wings. A boy stuffs a candy bar in his mouth leaving his mouth and face smudged with chocolate. A boy kicks a candy pumpkin and it oozes pink goo when it opens up. Several people have badly discolored teeth and a man is covered with very long hair. A girl chews gum aggressively and loudly throughout the movie and a girl puts chewed gum behind her ear (to save it for later) in a few scenes. A man gags while trying to utter words like, "family or parents."

MESSAGE - Family is the most important thing in the world; it's more important than riches and fame -- and even chocolate. 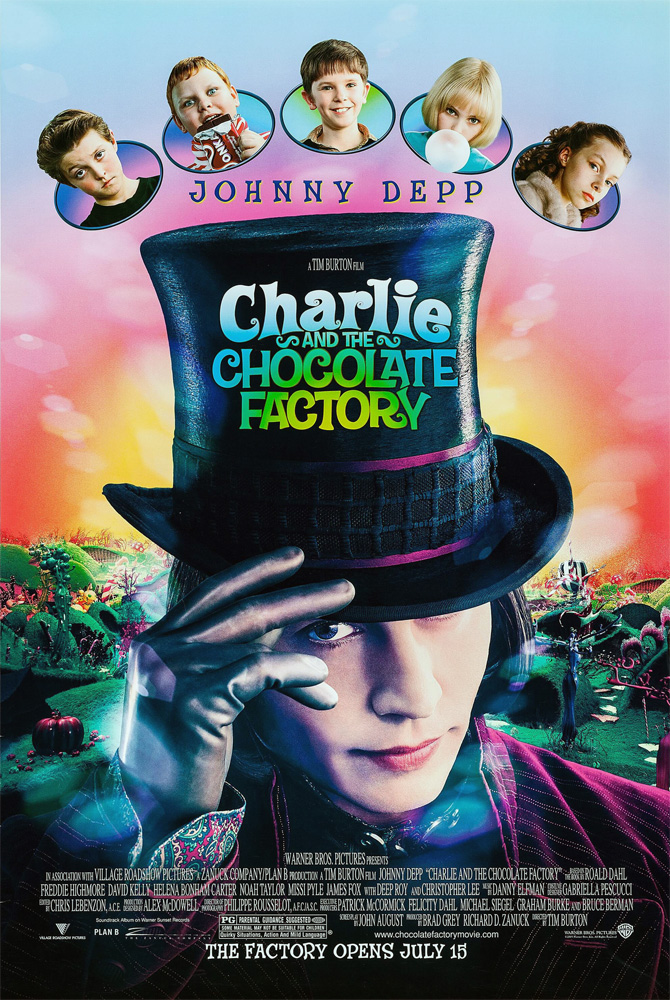