When a successful career man, father and husband (Jason Bateman) switches bodies with his slacker lady's man friend (Ryan Reynolds), the two of them explore lives they never had, and they gradually learn to appreciate their own. Also with Olivia Wilde, Leslie Mann and Alan Arkin. Directed by David Dobkin. [1:41]

VIOLENCE/GORE 5 - A man grabs another man's throat and begins to choke him, both men fall to the ground (one man's hands are still around the other man's throat) and we hear the man panting and say that he cannot breathe; the two men wrestle momentarily and then pull apart (both are unharmed).
► A young girl attempts to shove another young girl and the second girl lifts up the other girl by her arm and slams her into the ground; her father cheers as a crowd of people look in horror (the girl stands up unharmed). A young girl trips another girl, sending her crashing to the ground.
► On two occasions we see an infant boy violently slamming his head against his crib until a man discourages him and the baby stops. A man repeatedly throws a young girl into the air and she almost hits the ceiling; he then puts her down and shoves her into a stairway (she is unharmed).
► An infant boy and an infant girl are seen narrowly avoiding being injured after a man places them on a kitchen counter and leaves them unguarded; the boy almost puts his hand in a whirling blender, and the girl throws a knife through the air and it lodges in a cabinet next to a man's head (both the boy and girl are unharmed).
► We see the bare buttocks of an infant boy pucker and a massive amount of liquid feces fly from the infant and hit a man in the eye and on the cheek and fill the man's mouth; the man uses a diaper to wipe out his mouth and face, and we later see smudges of feces on the man's face. A man changes his infant daughter's diaper and we see feces lining the diaper while the man makes a crude joke about his experience defecating in his own pants while sleeping. A woman sits on a toilet as a man watches; we hear very loud sounds of defecation and flatulence and the man makes a crude remark about defecating. A man tells another man that he wants to take a "solid dump;" we see a man sitting on a toilet (no nudity is visible) and the sound of flatulence is followed by the implied sound of feces hitting water. On two occasions we see two men urinating into a fountain: in both scenes the stream of urine is visible and the sound of urinating is heard, and on one occasion a man turns to another man and we see urine hit the other man's leg and the two men discuss the appearance of their urine streams; on the second occasion the men urinate into a fountain in the center of a crowded shopping mall, a young girl shouts that she sees the men urinating and a second girl makes a disgusted face.
► A man lifts up an infant boy and an infant girl, he carries them down the stairs by the scruff of their pajamas and one of the babies appears to be upside down as he carries them. A man places an infant boy and girl into a sink; he then pours milk over both of them.
► A woman hits two men in the head with a rolled up paper; she then slaps both of them on the face and shouts. A woman shouts at a man, threatens to "cut him" and then kicks him repeatedly until he gets out of the bed they share.
► A man shouts at another man and angrily grabs his arm. A man slaps another man on the back of the head. A man grabs a woman's jacket lapel and another man drags him away.
► A man shouts at another man, saying he is going to kill him. Several men shout angrily in a boardroom. A man shouts at another man. Two men argue and shout at one another frequently. A woman shouts at two men. A man shouts at two crying babies.
► A man tells an older man that another man is going to be "slitting throats" when he sees him. A man tells a young girl to fight back against another girl, saying that she has to "shiv" someone and to "shank her entire family." A man tells a girl that problems are to be solved by violence. A woman laughs and tells her daughter and husband that she enjoyed the sound a young girl made when she was slammed to the ground by their young daughter. A girl tells her father that another girl had knocked her over, and the man and the girl's mother tell the girl not to fight back. A man half-jokingly tells another man that he had fought a homeless person for a sofa. A man shouts that another man is urinating on people (nothing is seen or heard). Two men frequently discuss how they had urinated into a fountain together. A man tells a woman that he needs to urinate into a fountain.
► An infant kicks a basket and objects off a changing table and, a man struggles to pick them up. A man and a young woman crash into one another as they play bumper cars. A man stumbles over a rug and he stands up unharmed.
► We briefly see a cartoon in the background that shows a girl swinging a giant teddy bear through the air and slamming it into the ground repeatedly. We see a man in a movie shout and slam a guitar into a wall.
► We see a young girl riding in the front seat of the car, unrestrained, and when she asks her father if she is safe without her car seat, he reassures her.
► A man talks with food in his mouth, we see the chewed up food on his teeth and lips as he opens his mouth for a woman. We see an extremely pregnant woman's bare stomach move and a man shouts that he can see the baby kicking.

MESSAGE - Sometimes it takes living someone else's life to truly appreciate your own. 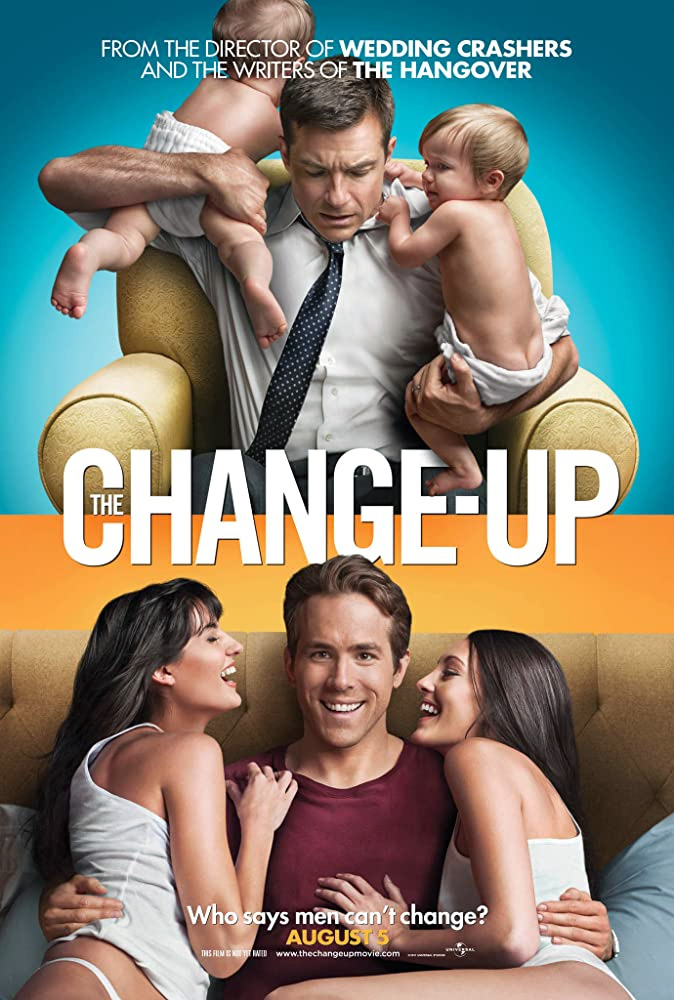