Why is “The Card Counter” rated R? The MPAA rating has been assigned for “some disturbing violence, graphic nudity, language and brief sexuality.” The Kids-In-Mind.com evaluation includes a sex scene with partial nudity, full male frontal nudity in a few torture scenes, several scenes of torture in military settings with people being beaten, an off-screen torture and fighting scene that ends with a man with bloody wounds, threats of violence, descriptions of prison conditions, news reports of a murder by gunshot, a fistfight with bloody wounds, and at least 15 F-words and other strong language. Read our parents’ guide below for details on sexual content, violence & strong language. A soldier (Oscar Isaac) that served time in military prison for being one of the Abu Ghraib torturers, makes a living by traveling from casino to casino and winning at playing cards. When he becomes emotionally involved with a woman (Tiffany Haddish) who wants to recruit him as a professional poker player and a young drifter (Tye Sheridan) his orderly life is frustrated. Also with Willem Dafoe, Alexander Babara, Bobby C. King, Ekaterina Baker, Bryan Truong, Dylan Flashner and Adrienne Lau. Directed by Paul Schrader. [Running Time: 1:51]

– A man goes to a woman’s hotel room, he talks to her about wanting to act on feelings he has for her and they kiss passionately; they have sex and we see him fully nude (bare legs, buttocks, and back) thrusting on top of her (we see her bare leg to the hip, her bra and cleavage).
► A man and a woman kiss. A woman kisses a man on the cheek. A man kisses a woman on the cheek. A man tells a woman that he likes her. A man and a woman hold hands while walking.
► Fully nude men are shown briefly in a few grainy torture scenes and we see bare chests, abdomens, genitals and buttocks. A man pulls off his shirt after losing at a poker game and yells until security escorts him out of the room (we see his bare chest, abdomen and back). A woman wears dresses that reveal cleavage, bare back and legs to the upper thighs in several scenes. Cocktail servers in casinos wear low-cut dresses and tops that reveal cleavage. A man wears boxer briefs in a few scenes and we see his bare chest, abdomen, back and legs to the mid-thighs. A woman wears a deeply cut blouse that reveals cleavage. A man’s shirt hangs open and we see his bare chest and abdomen.

– A military prison is shown as blaring discordant music plays with captives wearing bags over their heads, handcuffed and kneeling as soldiers berate them, hit them with sticks and hold dogs that bark and lunge at them; we see one fully nude man, presumably smeared with feces, as a soldier hits him. A man yells at another man in a prison cell; he orders a soldier to pick the man up and he slams him against cell bars. A man puts used briefs over another man’s head while blowing cigarette smoke in his face and posing for a photo. A man kicks another man repeatedly in the stomach while he is on the ground and the man lies motionless or dead. A man in a prison dining hall takes a piece of food from another man’s tray, the other man stands up and yells at him, the first man eats what he took form the man’s tray and the other man punches him in the face twice (we see blood on his mouth and his eye). A man comes home to find another man with a gun inside his house; they talk briefly and the gunman escorts the other man to the next room where he presumably tortures him or they fight (we don’t see anything but we hear moaning, squishing, stabbing, slashing and cracking from off-screen); one man comes out with a very blood hand and twisted finger and blood on his shirt and head (we do not see the other man) and calls 911 to report a homicide. A man takes a young man to a motel room, tells him to sit on the bed, threatens him with torture and offers him money if he does what he asks of him; the young man agrees and the scene ends. A man stands up during a poker game (after losing), yells, “In the name of Jesus and Mary”, and removes his shirt while yelling and being escorted out of the room by security.
► We hear news reports that a man was shot at and that he shot and killed the gunman (we do not see this). A man says that he would like to shove something in a man’s mouth and out his rectum (using crude terms). A young man says that he would like to use a tranquilizer dart to sedate a man, strip him naked, put a bag over his head, hang him from the ceiling and make him try to perform a sex act while he hits him in the legs. A young man talks about wanting to kidnap, torture and kill a man. A young man talks about his father returning from service and that he became addicted to oxycodone, that he beat his mother and him and then killed himself. A man describes the conditions of prison with stale smells and repetitiveness. A man talks about spending 8½ years in military prison. A man talks about techniques for hostile interrogation including stress conditions, confinement in enclosed spaces, sexual humiliation, starvation, exposure to loud music and sleep deprivation, as we see men undergoing each of these things in prison settings. A man describes a woman’s job as running a stable of gamblers. A man talks about the weight of his past actions. A man describes sophisticated facial recognition software. A woman asks a young man, “Am I in any danger?” A man refers to “their culture” while talking about torturing men. A man describes a poker game and says, “There’s blood in the water.” A man describes smelling feces, urine, sweat, oil and explosives in a Black Ops site. A man describes the size of spiders, ants and cockroaches in an Iraqi prison.
► A man covers everything in a motel room with white sheets. People play poker, blackjack and roulette in several scenes. We hear toilets flushing in a public restroom a couple of times.

The Card Counter SUBSTANCE USE

– A young man describes preparing a tranquilizer dart and ordering the drugs online. A woman drinks a cocktail in a casino bar, a young man drinks a beer, a man drinks whiskey alone in a motel room in several scenes, a man and a woman drink cocktails in casino bars in a few scenes, and people drink liquor and wine at a bar.

– We are each responsible for our own actions. 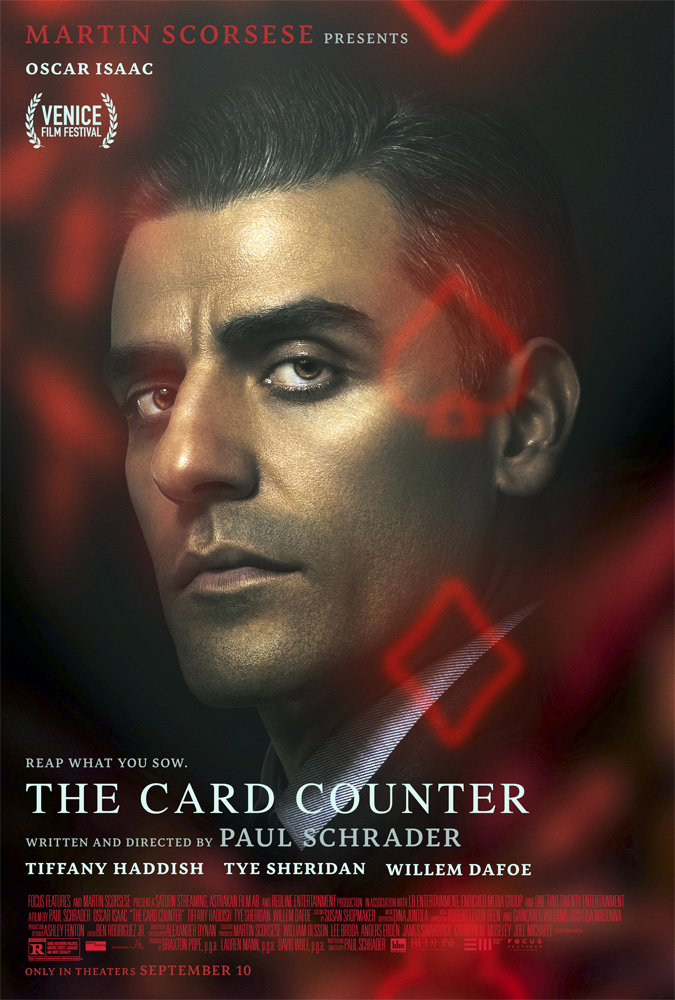