When a 200 year old vampire mother and child take refuge on a nearly empty island; they soon change all of its residents. With Saoirse Ronan, Gemma Arterton, Warren Brown and Caleb Landry. Directed by Neil Jordan. [1:48]

SEX/NUDITY 7 - We see a shirtless man thrusting on top of a woman with the woman facedown on a bed and looking at her cell phone (she appears very bored).
► It is implied that a man rapes a teen girl: we hear the girl crying, curled up in a bed and then see the man buttoning his shirt and previous sex is implied. A man threatens to rape a teen girl; we later see the teen girl crying, crumbled on the ground and a small amount of blood is visible on her white nightgown (please see the Violence/Gore category for more details).
► A man enters a room where it is apparent that a woman was previously being forced to have sex with another man; the woman appears to be shaken as the man buttons his shirt (we see the woman's bare breasts when she sits up). A teen girl overhears the sexual moaning of a woman and a man (the woman is her mother). We see a man wearing boxer-style underwear leave a room with two women wearing robes on either side of him; it is implied that they are about to have sex.
► A woman kisses a man passionately; the woman straddles him and bites his neck (implied to be killing the man; please see the Violence/Gore category for more details).
► A man wearing thong-style underwear is seen on his hands and knees on a bed while a woman wearing a short robe and visible bustier is seen spanking him repeatedly with a whip.
► A woman pulls on a short skirt and bustier and begins to work as a prostitute; a man approaches the woman and she tells the man a series of prices for various sexual activities, the man gives her money and the woman kneels in front of him; the man begins crying, the woman stands up and hugs him and the man pulls up his pants (no nudity is visible). A woman kisses a man. A woman cuddles next to a man and kisses him on the cheek. A teen boy leans in to kiss a teen girl, their faces are very close and he then kisses the girl's forehead; their mouths come very close and the teen girl turns and runs away.
► A teen boy and teen girl hold hands; we see them on a bed together and the teen boy is shirtless (his bare chest is visible); they kiss passionately until they are interrupted when the girl accidentally scratches the boy. A teen girl nuzzles against a teen boy, kissing him.
► A man warns a teen girl not to trust another man, the man takes the girl to a brothel where he leaves her, saying that he is giving her the "gift" of a job (being a prostitute) and a woman takes the girl by the hand and leads her to a bedroom. Several men are shown at a strip club where a woman dances suggestively and performs a lap dance in front of a man; she is wearing thong-underwear and a bustier and we see other women in the background dancing against poles. A woman proposes to a man that they should turn a hotel into a brothel. A woman angrily chides two other women that are teasing her teenage daughter, crudely telling the women to return to the streets to perform oral sex for money.
► A teen girl's voiceover explains that her mother makes her money on her "knees."
► We see a painting of a woman in the background of a classroom and the woman's bare breasts are visible. We see a woman in the shower and blood spray pours off her as she showers (we see her bare back).

SUBSTANCE USE - A young woman appears to be strung out on drugs and we see her shaking and holding a cigarette, throughout the movie a woman appears to be heavily under the influence of drugs, and a woman almost passes out as she walks through a hallway and another woman catches her just as she is about to fall. A man drinks a beer. We see a young man smoking a cigarette.

MESSAGE - The bond of a mother and daughter is very strong. 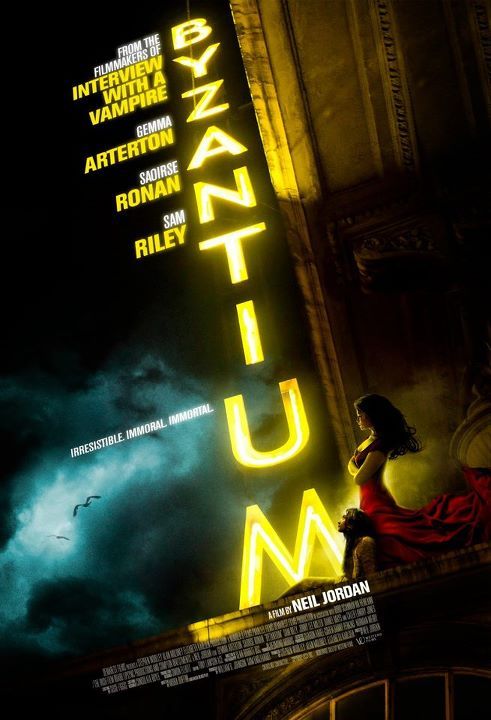