A young man (Jake Gyllenhaal) born without natural immunities and raised in a bubble provided by his well-intentioned but misguided mother (Swoosie Kurtz) sets out on a cross-country trek to Niagara Falls to find his wayward girlfriend (Marley Shelton) and win her back. Along the way he has many adventures. Also with Geoffrey Arend and John Carroll Lynch. The release of the film has been protested by the Immune Deficiency Foundation. [1:24]

SEX/NUDITY 5 - A young man and woman kiss and he begins to grope her but she stops him, and a young man and woman kiss romantically. A young woman grabs a young man and pulls him close to her (through a plastic bubble) and talks about wanting to touch and kiss him. A young man wakes up with an erection (we see a large protrusion in his sheets) and, not knowing what it is, he hits it with a bat. A young man becomes aroused while holding a woman closely to teach her how to play the guitar. Two women strip to their bikinis and mud-wrestle with a young man in a bubble (there is the suggestion that he is aroused). A young man grabs a young woman's clothed buttocks, a man of very small stature gropes a woman's clothed breast (she doesn't react because she seems to think he is a young boy). We see a sketch of a nude man and woman with genitals, and there's a statue of a six-armed goddess with bare breasts. A young woman dressed in a halter top and shorts (we see her bare back and legs) washes her car while a boy admires her from his bedroom window. A young man looks at a young woman's cleavage and clothed breasts. People on stage at a concert wear tight-fitting leather outfits revealing cleavage and thighs and dance to the music, two women adjust their halter tops and a young man admires them from a distance, a group of women in tight-fitting outfits walk across a street exposing thighs, cleavage and midriffs. A young woman wears a halter top which reveals her completely bare back and cleavage, a young woman sunbathes in a bikini, a young man is bare-chested as he sunbathes in shorts, a young woman wears a bustier and petticoat, and we see a young man in a T-shirt and underwear a couple of times. There are sexual references and some sexual innuendo: Two young men remark about wanting to have sex with a young woman, a young man recites the pledge of allegiance whenever he becomes aroused, a young man makes sexual gestures by thrusting his hips, a young woman remarks about wanting to wait for sex until she's married, two men and a woman ride off together (with sexual implications), a man describes what sex was like with a woman using engine terms, a young woman talks about playing spin-the-bottle with the kids in a special education class. We see a completely nude baby with an exposed penis in a plastic bubble.

VIOLENCE/GORE 5 - A young man in a bubble is hit hard by a moving bus and he flies some distance before hitting the ground, he is hit by a car and flies into a train car, he is thrown from a car and crashes through a billboard, and he is dropped out of a plane and lands in Niagara Falls: he goes over the falls and floats to the surface. A man of very small stature strapped into a child safety seat is tossed out the window of a moving car (he rolls around grunting before coming to a stop). A young man head-butts a man, he flies through the air, hits a train car and lands on the ground. A restaurant catches fire, with a young man in a bubble trapped inside; he is pulled out before he is harmed. A town explodes and people run through the streets. A truck hits a cow (we see it lying dead on the road), another truck drives through the dead cow cutting it in half and spraying blood and tissue on a man sitting nearby, a motorcycle gang drives through the bloody mess of cow guts, and then a bus drives through what remains spraying more blood and tissue on the sitting man. A woman holds a gun on a store owner who is restrained with tape and lying on the floor. Two trucks collide and a woman is thrown on the windshield. A man tears the roof off a car. A young man hits himself in the crotch with a bat after waking up with an erection. Many people shove each other and fight. A man threatens a young man in a bubble with a knife, a man threatens a busload of people with a knife, and a man talks about wanting to cut a man's heart out. A dream sequence shows a woman being eaten by a dinosaur, but she's fine a minute later. A young man falls on the floor and he appears to be dead, a taxi driver appears to have died at the wheel of his taxi -- the car continues going. A young man in a bubble runs from a car, a truck, and a busload of people chasing him. A young man yells out of frustration, a woman yells in anger, a woman yells at and threatens someone on the phone, and a woman yells at and slaps her husband on the arm. A vulture lands on, pecks at and chases a young man in a bubble, and a man with a stick hits the bubble repeatedly. A young man tumbles down stairs while encased in a bubble, and a crowd at a concert bounces him and the bubble in the air. A young man steps in some dog excrement (there's a squishy sound). A woman makes anti-Semitic remarks, a group of people taunt and make fun of a Hindu man, and we see a trainload of people who are referred to as "circus freaks": one man has a beak shaped nose, one man has flippers for hands, one woman can twist herself into a pretzel, a couple appears to be attached at the head, and a man is very tall, has really large ears and hands. A woman stabs a ball with a knife, an ice cream truck drives recklessly, we see people running and screaming, and a bus runs over a motorcycle. 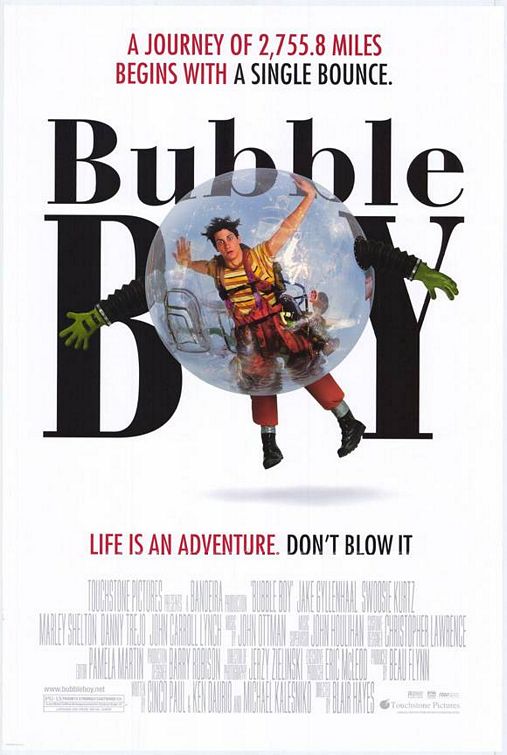