Brothers Dean and John Solomon (Will Forte and Will Arnett) attempt to conceive a grandchild to fulfill the last wish of their dying father (Lee Majors). However, because they were home schooled in the remote Arctic by their dad, they are socially inept and very awkward in their quest to find a woman who's willing to bear their child. Also with Chi McBride, Malin Akerman and Kristen Wiig. Directed by Bob Odenkirk. [1:28]

VIOLENCE/GORE 4 - A man and a woman on a date walk down a street to a corner and as she steps off the curb she is run over by a bus (we see her disappear as the bus races by; we do not see a body or blood, and the scene ends).
► A man stands against a wall, and presses his face onto a dartboard as another man throws darts around his profile; one dart strikes the man in the nose and sticks there, but we do not see blood (the man shouts a bit, and then calms down).
► We see a man asleep in a hospital bed, with tubes and machines connected to his body and we are told that he is in a coma. The power goes out several times in an apartment where a man is on life support and another man uses defibrillator paddles to revive the man each time.
► A chair is thrown through a window and lands on a sidewalk (no one is harmed; we see broken glass fall on the grass and walkway).
► A large man yells at and threatens to beat up two other men several times. A woman upbraids two men for trying to learn parenting skills at a playground by borrowing other people's children.
► A man discusses the safety aspects of his products with customers, advising them of dozens of frightening dangers to their children, including tangling in wires, hanging, strangulation, and death by homoerotic asphyxiation. We hear an answering machine message that a man received devastating news during a physical exam.
► Two men argue, and one cries, shouts, and dashes off. A man screams, throws things around an apartment and burns a pile of memorabilia. During a childbirth class several people argue and one tells everybody to shut up and they do.
► A man drives erratically, hitting the corner of an apartment building garage, speeds past vehicles on the street, and nearly strikes an EMT removing a patient from an ambulance at the hospital entrance; a man drives erratically in several additional scenes, nearly striking cars, buildings, and people.
► A sick man is taken from the hospital to a store in his hospital bed, with tubes and machines connected to his body. A man urinates by the side of the road next to his car (we see his backside from the head down to mid-calf, and a stream of urine going off to the right). Two men describe that they substituted food and money in a robot baby's diaper with a dog's excrement (we do not see this). A man hides food and money in a robot baby's diaper and another man eats the food.
► A man buys a robot baby and repeatedly drops it from a 7th floor landing for another man to catch; he misses the doll each time, finally catching it and it's head is broken and on a spring-like neck. A man hides a robot baby in a toilet tank, timing another man on how long it takes him to find it. Two men test an armored crib by throwing and breaking several empty beer bottles against it.

SUBSTANCE USE - In a restaurant scene, there are glasses of wine on tables and four diners drink, two men order and receive bottles of beer, a man unlocks a high kitchen cabinet, takes two bottles of Champagne down, opens one, and we see several bottles of alcoholic beverages in the cabinet, and a man opens a bottle of Champagne, pours himself a glass and takes a sip. A man smokes a cigarette on a city sidewalk.

MESSAGE - Some people will go to great lengths to have a child. 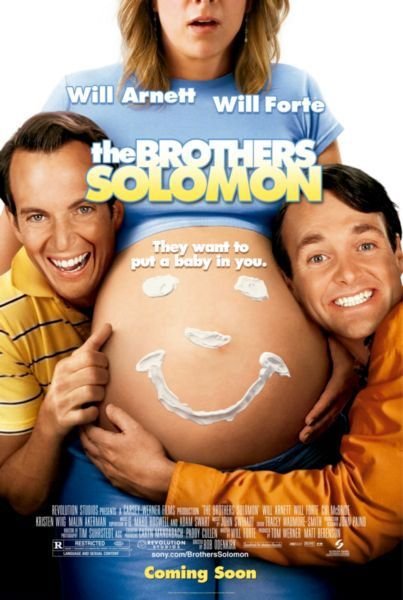