Using the 1999 Columbine School massacre as his starting point, documentarian and political provocateur Michael Moore mixes interviews, confrontational tactics, media reports and humor in order to examine why there are many more gun deaths every year in the U.S. than in other industrialized countries. Interviewees include Marilyn Manson, Charlton Heston, John Nichols, Matt Stone and Dick Clark. Winner of the Special Jury Prize at the Cannes Film Festival. [2:00]

SEX/NUDITY 5 - We see several scantily clad women (mainly in skimpy bathing suits) in provocative poses, shooting automatic weapons. We see photographs of scantily clad women in a wall calendar (one is wrapped in an American flag). We see the CD cover of the album "Mechanical Animals," which shows a photo illustration of an androgynous-looking Marilyn Manson: he seems totally nude, has full breasts that are obscured by the CD title, and no genitals; we also see Manson on stage without a shirt (his chest looks normally masculine). We see several shirtless men, and women bowling are wearing very short skirts.

VIOLENCE/GORE 5 - We see extensive video surveillance footage of Eric Harris and Dylan Klebold, the Columbine High School Killers in Littleton, Colorado, terrorizing students: we see students hiding under desks in the cafeteria and other rooms, while Harris and Klebold are strutting and pointing their guns. The video is of very poor quality and it's not clear whether anyone's shot. We see video of Columbine after the massacre, showing several black stains on the floor (evidently blood) and two of the victims show scars from bullets. We listen to panicked 911 calls from Columbine High School students and parents, as well as a teacher's frantic 911 call after a six-year-old in her class shot and killed another six-year-old. There are many, many scenes of people shooting different types of guns, mostly in the air and at targets. We also see several dead people, presumably the victims of gun violence, and bombs exploding and other destruction (several from the Kosovo campaign). Newsreels (some in grainy black-and-white) show several executions by gun: invariably, the victim slumps to the ground (blood is rarely seen). We also see newsreels of police and army personnel flogging demonstrators, and of soccer hooligans beating up on each other. We see a woman who was shot being transported in a gurney; the sheet covering her is quite bloody. During an animated feature, someone's head is chopped off (some blood is evident; the scene is brief ), a paperboy is shot, witches are seen burning, and many characters scream and yell in panic and shoot other characters. We see a dog outfitted as a hunter, with a gun on its back, and we see the legs of a man lying down; a voice over explains that the man was accidentally shot on the shin. We see a victim of the Oklahoma bombing with a bloody face. Footage from the TV show C.O.P.S. shows police chasing and handcuffing several men. We see footage from the films "The Matrix" and "The 6th Day": From the former, a man is shooting an automatic weapon, and from the latter a man has his foot shot off (no blood). We see footage of Nazis parading. A man is shown holding a club and approaching a seal (nothing else is shown). We see footage of Reginald Denny being pulled out of his truck and beaten up during the Los Angeles riots of 1992.

LANGUAGE 5 - 4 spoken F-words, 1 F-word written on a hat, a couple of scatological terms, one anatomical term, several religious exclamations, a derogatory term for homosexuals, some mild obscenities and insults.

MESSAGE - The reason for the high incidence of gun deaths in the U.S. is a combination of unregulated ownership of powerful guns and media-induced paranoia. People are generally weird, but gun aficionados and militia members are weirder than most folks. The NRA leadership is insensitive and mean-spirited. The U.S. support for dictators is ill-advised. 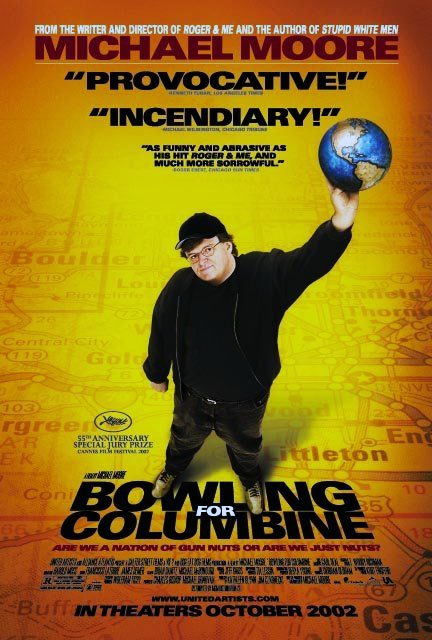