Why is “Bones and All” rated R? The MPAA rating has been assigned for “strong, bloody and disturbing violent content, language throughout, some sexual content and brief graphic nudity.” The Kids-In-Mind.com evaluation includes full female nudity including genitals on pornographic posters, an implied scene of a man masturbating another man, several kissing scenes and some partial nudity, several scenes of people eating the remains of dead and sometimes partially alive bloody bodies with a lot of blood on both the attacker and the victims, many discussions of violent attacks on people and eating parts of their bodies, a few arguments, and over 40 F-words and other strong language. Read our parents’ guide below for details on sexual content, violence & strong language. After a shocking event leads a young woman’s (Taylor Russell) father (André Holland) to leave her on her own, she searches for her estranged mother with the help of a stranger (Timothée Chalamet) and finds disturbing truths about herself along the way. Also with Mark Rylance, Anna Cobb and Chloë Sevigny. Directed by Luca Guadagnino. [Running Time: 2:11]

Bones and All SEX/NUDITY 7

– Pornographic posters of fully nude women are seen on the walls of a man’s house (bare breasts, buttocks, as well as an anus and a clitoris are seen).
► A young man meets a man in a dark cornfield, they kiss, they run and laugh: a teen girl follows sounds and moaning in the field and sees one man masturbating the other man as he moans (please see the Violence/Gore category for more details); the man’s partially nude body is shown later with his bare chest and abdomen visible.
► A young man and a teen girl kiss while riding a Ferris wheel. A teen girl touches a young man’s hair and they hold hands; they then kiss tenderly. A young man and a young woman kiss in a few scenes. A man grabs a teen girl and pushes her onto a bed while holding a knife to her face; he lies on top of her and presses his head against her chest while talking to her and he kisses her cheek (please see the Violence/Gore category for more details).
► What could be an open condom wrapper is shown on a nightstand.
► A topless teen girl sits behind a shirtless young man also seated on the ground and holds him (we see her bare back and the partial side of her breast and his partial bare back). We see what appears to be two fully nude people jumping off a cliff into water (we see only flesh without clear details). A man is shown on his hands and knees and wearing a tank T-shirt and briefs as he feeds from a dead woman’s body (please see the Violence/Gore category for more details); we see his legs to the upper thighs, shoulders and a bulge between his legs from the back and later from the front. A young man is shirtless in a few scenes and we see his bare chest, abdomen to the hips and back. A man wears overalls without a shirt underneath and we see his bare shoulders and partial sides. A teen girl wears a crop top that reveals her bare abdomen. A teen girl’s dress is sheer when lit from the back and reveals the outline of her legs to the hips. A teen girl wears a camisole that reveals cleavage and the outline of her breasts and nipples.


Bones and All VIOLENCE/GORE 8

Bones and All LANGUAGE 9

Bones and All SUBSTANCE USE

– A man tells a young man that he has weed in his car and we see them smoking later. People hold and drink from cans of beer while seated around a campfire. A woman smokes a cigarette in a bus station office, and a young man smokes cigarettes in a few scenes.

Bones and All DISCUSSION TOPICS

Bones and All MESSAGE

– Anyone can find love. 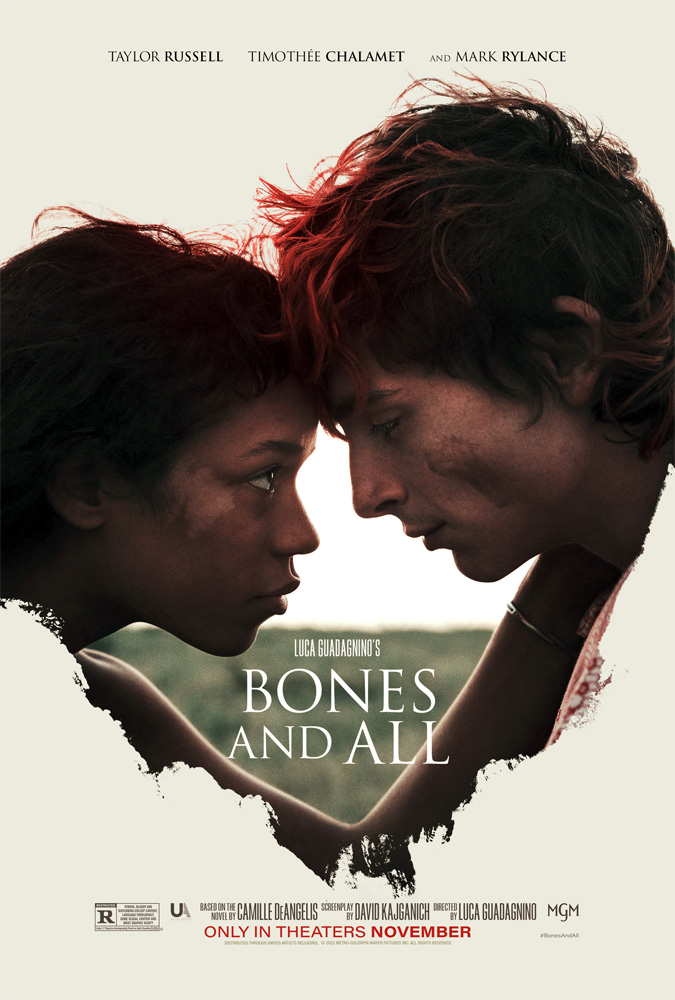