SEX/NUDITY 5 - A man looks at a "Hustler" magazine and the bare breasts of a woman are visible on the cover. Women wear low-cut dresses in several scenes revealing cleavage. In a non-sexual context a man pulls off his shirt and pants and we see his bare chest and the outline of his legs. Several boys are nude and sleep huddled together (we see their bare backs, legs and buttocks).
► A woman touches a man's hands tenderly, they gaze into each other's eyes and the scene ends (it is not clear if they have sex).
► Two prostitutes try to sell their services to a man, who declines.
► Men and women dance together.

VIOLENCE/GORE 8 - A boy is held with his arms over a boat hull, a man stands over him with a machete and cuts off one of his hands (we see the severed hand being tossed away and the boy yells and falls over).
► Rebels (men and young boys) with guns drive along a road toward a village, they jump out of their trucks and attack the villagers, shooting many women and children (we see bloody bullet wounds and bodies on the ground).
► Rebels with guns drive into a city shooting people all around and we see people being struck (blood spurts and they fall to the ground), cars exploding, a woman holding a child is shot (we see blood on the woman's shirt), and many people run toward a line of government troops that open fire on them and we see many cut down as they run. Two men and a boy are shot as they run away. A man is shot in the chest, and he falls back dead. Several men are lined up against a wall and shot (we see one struck and he falls to the ground).
► Several boys with guns walk toward a village shooting people as they try to get away (we see blood on wounds). Many men and boys are shot down as two groups with guns shoot at each other. Two armed boys approach a truck and shoot the driver (we see a bloody wound on his side but he survives).
► A blindfolded boy is told to shoot a gun, which he does, and when he removes his blindfold he sees that he has shot a man (blood sprays on the wall when the man is struck) and he is slumped over dead on the ground.
► A man beats another man repeatedly using a shovel, and the man tries to get away but is struck down (blood spurts on the man who is doing the killing). A man slits a man's throat killing him. We see a dead man hanging by his feet and swinging, and we see another dead man (or dying) being dragged behind a truck.
► A convoy of reporters is shot at, one car explodes, the driver of one car is shot and killed (we see blood), and another man takes the wheel and drives through thick bush eventually crashing into a ridge (three passengers get out of the car relatively unharmed).
► We see dead bodies hanging from trees in thick jungle and people with guns hide in the trees. We see dead bodies with bloody wounds lying around an overturned truck. Government troops bomb a rebel mining camp, many men are thrown by explosions and we see burned and bloody wounds (one man has a badly burned face and eye). A man lies dead sprawled across a bar (we see blood in his mouth and on his face) and people dance and celebrate around him.
► Several young boys are beaten and whipped and brainwashed into believing that they are unloved by their parents and unwanted in order to be made into ruthless and bloodthirsty warriors (we see blood on their faces and chests).
► A man yells in rage when he cannot find his son, and a rebel pounds on his hands with the butt of his gun, breaking them. Two men fight, they roll on the ground, and one holds a gun to the other's face. A man is held at gunpoint, as his family runs away from an attacking mob, and the man is kicked and threatened. Many men are beaten, thrown into cells and held at gunpoint.
► We see many young children missing hands (we are told that they were cut off to send a message). A boy carves letters in his own arm (we see a bit of blood). A man skins what looks like a monkey behind a tree (we see part of the bloody carcass, a bloody knife and hands). A man cuts open a small section of a goat's back and pulls out a handful of diamonds (we see blood-covered stones in his hand). We see a bloody wound on a man's side. A man pries a tooth out of his mouth using a knife (we see blood on the knife and his mouth).
► A man threatens to rape a man's wife and keep his daughters for himself. A group of people is attacked by rebels, a boy is dragged away from his mother, and they both scream and protest.
► A man forcefully searches another man for diamonds. A man is held down and threatened with having his hand cut off (he is let go at the last minute, to be used as forced labor in mining). A boy with a gun threatens to shoot two men. A man holds a machete to a boy's throat. A man with a knife threatens another man.
► We see many explosions as helicopters fire on a village (we see people being blown through the air).
► A man talks about his mother having been raped and murdered and his father decapitated and hung from a hook in a barn. Boys are referred to as "baby killers." A man makes a comment about the possibility of a girl being raped and a baby dying in a refugee camp. We hear reports of civil wars in South Africa over diamond mines.
► We see a refugee camp that we are told holds 1 million people. We read that over 200,000 children are used as soldiers in a civil war. 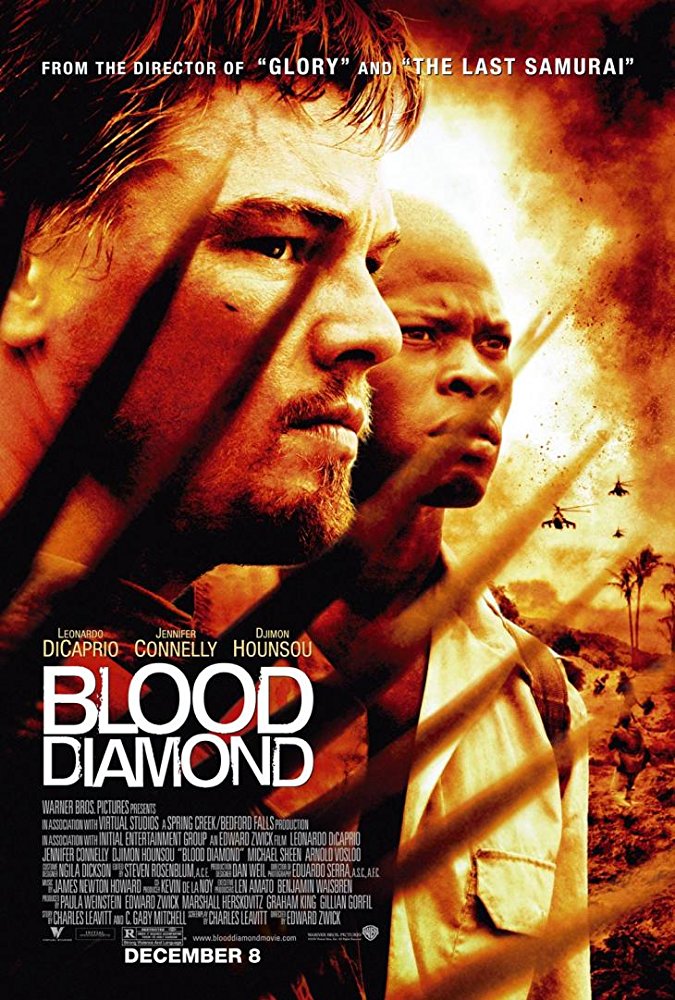