Feature film, aka "Zatôichi," based on the popular Japanese TV series from the 1960s: A blind swordsman of exceptional ability finds his way into a remote village where farmers are being threatened by gangs and being forced to pay protection money. He befriends two Geishas who are seeking revenge for the death of their family at the hands of the gang's boss. With Takeshi Kitano, Tadanobu Asano, Yui Natsukawa, Michiyo Ookusu and Gadarukanaru Taka. Directed by Takeshi Kitano. In Japanese with English subtitles. [1:56]

SEX/NUDITY 5 - A man caresses a boy's chest, begins opening his robe and says "you can be my boy." A boy approaches a man and asks, "don't you want to spend time with me?" The man leads him away into a building and the boy returns with money. A man pushes a woman to the ground, lifts her skirt and says "show me what you have." A woman asks a man to stay the night at her house. A man gives a woman a back massage. A man wears loin-cloth-type pants. Men are bare-chested in a few scenes. A man puts on makeup and says he "wants to be beautiful."

VIOLENCE/GORE 10 - Men stealthily enter a room and stab many sleeping people to death (we see the dead bodies covered with blood and see blood spurt with every stab and slash) then others in the house are stabbed and slashed to death and two children stand looking at their dead family after the men leave. An elderly man faces many men with swords, they charge him and he slashes them and stabs them (we hear squishing and see blood spurting and spraying with every slash) and we see bodies with puddles of blood around them on the ground. A man cuts a man's hand off (we see the severed hand land on a table and blood spurts and sprays), the man slashes two other men across the chest and stomach (blood spurts with every slash) other men come in after him and are slashed, and a woman punches a man in the face. An elderly man is attacked by two men, he slashes them both with his sword (blood sprays), two more men attack him, he slashes them both (blood spurts and sprays), and another man is slashed across the chest then across the back and he falls against a wall and slips down to the ground. A man slashes a man across the eyes (blood sprays and we see the man with a bloody hand over his eyes). An elderly man fights many with swords, blood sprays and spurts, two men are stabbed into a tree, one tries to stab the man through a door, he is slashed (blood sprays on the rice paper), one man is cut from the crotch to the waist, one man grabs a gun and he is slashed, and one is stabbed in the hand (blood sprays and spurts). An elderly man and another man face off on a beach, they draw swords, they are both slashed, and one is killed. A man fights many men with swords, blood sprays all around, one man is slashed across the chest (blood sprays), and one more is slashed from head to toe (blood sprays). Two women (one is a man dressed like a woman) fight many men with swords, and they are thrown through a wall. Two men shove a boy and yell at him, a man kicks a man in the leg (we hear a crack sounding like it breaks) and slashes him across the throat with a sword, another man is slashed and a third man charges the man who stabs him through the abdomen (blood spurts and sprays and we hear squishy sounds with every slash). A woman wraps a chord around a man's throat (he gags) and another woman stabs him with her sword (blood spurts). A man slashes another man on the arm, slashes two other men (they lie dead on the ground), and stabs one through the stomach (we see blood spurt). A man is slashed across the stomach (blood spurts), one is stabbed in the stomach (blood spurts), one has his hand cut off, he runs and a man throws a sword into his back. A woman stabs herself in the abdomen, committing suicide (blood pools on the floor around her). Men fight with a man, punching and kicking him repeatedly. A man hits three men with a sword in its sheath and then breaks one man's neck. Two men fight with wooden swords: one hits the other hard on the back of the head several times, another man comes and he is hit hard in the stomach twice, and another man comes and he is knocked to the ground and hit several times on the back. Five men with swords approach a house, a man in the house is knocked down, the house is set on fire and the man and a woman who are also inside run for safety. A man approaches an elderly man intent on killing him, and the elderly man draws his sword cutting the man's sword at the handle. Men threaten a man for protection money, another man draws his sword and breaks a pitcher with it as a warning. A man punches a man and throws him through a door and then others kick him repeatedly while he is on the ground. A woman hits a dish out of a girl's hand and yells at her. A man draws a sword, spins it around and stabs it into a man's sandal, between his toes (there's no injury). Two men talk about testing a sword by killing a beggar. A man with a spear and wearing a chest plate charges around a house and through woods yelling in several scenes; in one scene a man throws a log that hits the man on the head knocking him to the ground briefly (we see blood on his head and face). Children hit a straw doll with sticks. Three men hit a man on the head with logs repeatedly (this is played as a gag). Men have elaborate tattoos all over their chests and backs. A man has a tattoo of a head with a dagger in it.

MESSAGE - Sometimes we cannot see things even with our eyes wide open. 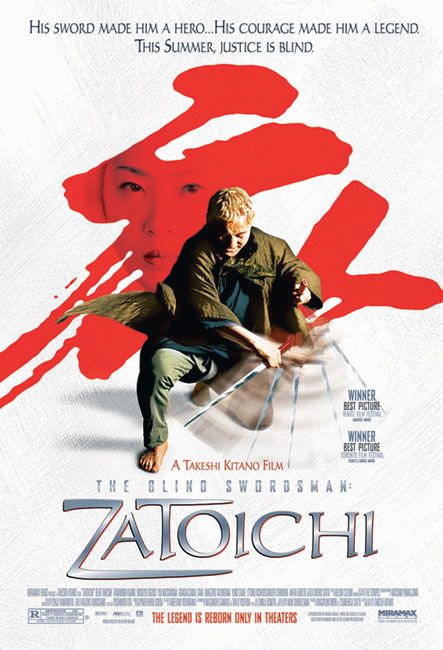