A young man (Derek Luke) struggles with making his place in the underground motorcycle racing world. He begins in the shadow of his father, and after his father's accidental death tries to break out on his own and become the undisputed champion. Also with Laurence Fishburne, Tyson Beckford, Lisa Bonet and Kadeem Hardison. [1:30]

SEX/NUDITY 4 - A woman lies on a man's back, in bed, he flips her over on her back and they talk (he's bare-chested and she appears to be wearing shorts and a tank top). A man and a woman kiss passionately, she climbs on his lap and they continue kissing. A man and a woman kiss and caress each other in a darkened corner, a man and a woman kiss romantically, and a man and a woman kiss a few times. A group of women and one man wear bikinis and many men and women admire them as they begin washing their motorcycles (a man kisses a woman's bare shoulder, another man caresses a woman's bare back, a woman is patted on the buttocks and a man grabs his crotch insinuating arousal). A man and a woman lie in bed holding each other. A man sits on a sofa in his boxer shorts. Two men and a woman admire a woman as she walks by (one wears a low-cut top that reveals cleavage). Women wear revealing outfits in many scenes (we see a lot of cleavage, bare abdomens, bare shoulders and backs, bare thighs): One woman wears short shorts and we linger on a tattoo on her upper thigh, we see a woman's bare buttock as she gets a tattoo, and both men and women wear form-fitting leather outfits in many scenes. Men wear vests that hang open with no shirt underneath and expose their bare chests in a few scenes. A man is bare-chested while getting a tattoo. A man talks about planning to have sex with a woman, that she kissed him and "stuck her tongue in my ear," and that she handcuffed him to a bed. A woman talks to a man about his infidelities. There are a few scenes that show people dancing together with some suggestive movement: one woman wiggles her hips and buttocks toward a man who smacks her on the buttocks a few times.

VIOLENCE/GORE 5 - There are many scenes that show motorcyclists doing tricks and stunts including spinning on one wheel, jumping, racing at high speed, etc. Riders do handstands or stand up on the seat of the bike, and one scene shows riders holding on to a moving bike while dragging their shoes on the street and kicking up sparks. Two men race on motorcycles: one bike loses control, crashes into many parked motorcycles, is thrown into the air, hits a man and sends him through a plate glass window (we see the rider with twisted legs and a bloody nose and see him die, and the other man lies dead on the ground with a pool of blood around his head). In another racing scene with two men racing on motorcycles one man swerves at the other and causes him to fall, and his motorcycle slides over him as he skids along the road (he gets up uninjured). Also, two men race on motorcycles at high speed and they swerve toward each other as they go, and a young man falls off a motorcycle while trying to do a stunt. Two men fight: one is punched in the stomach and face, and he falls to the ground; the injured man tackles the other man, pulls him off a bar stool, they continue to fight with head butts and punches, and with throwing each other (we see one man's bloody mouth and eye). Two men are beaten by a group of men, and one of the men pulls a gun. A man punches another man (he falls to the ground) and a man gets in another man's face and yells in several scenes -- a couple of these scenes include shoving. A man is shocked when he tries to start his motorcycle, and a man races without a helmet. There is a montage of many motorcycle races, and we see people grieving at a funeral. A man has a bloody arm from a tattoo, a man talks about "branding his women" with tattoos, and a man jerks and winces when a tattoo needle touches his chest. A mother yells at her son.

SUBSTANCE USE - People are shown drinking alcohol and smoking cigarettes. One man appears to be drunk.

MESSAGE - The difference between men and boys is the lessons they learn from life. 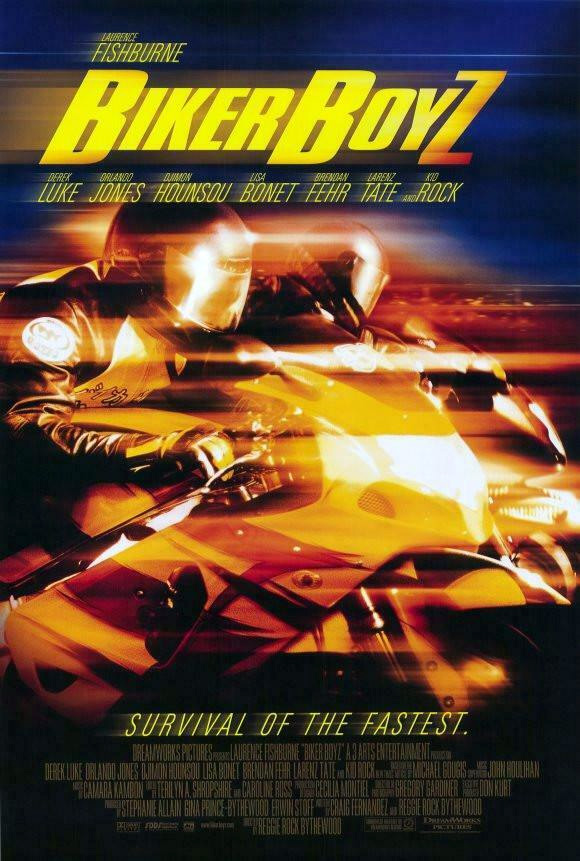