A rich Chihuahua (voiced by Drew Barrymore) becomes totally lost in the streets of Mexico City and does not know what to do without life's luxuries. Finally choosing survival over conspicuous consumption, she makes friends with poor dogs, including a former K-9 unit German shepherd (voiced by Andy Garcia). Her gardener's dog (voiced by George Lopez) and his owner come to her rescue after a long search. Also with the voices of Piper Perabo, Manolo Cardona, Cheech Marin, Paul Rodriguez, Jamie Lee Curtis, Placido Domingo and Edward James Olmos. Directed by Raja Gosnell. [1:31]

SEX/NUDITY 2 - A young woman embraces a young man in joy because they have found a lost dog. Two dogs sit together beside a swimming pool as a voiceover announces that this is their first date; they are then surrounded by the outline of a heart, which disappears and is replaced by three dozen puppies, with the voiceover stating that children may be in their future.
► A female dog calls a male dog a "hunk" and then "hot," another female dog tells a friend that another female dog has a date with the gardener's dog. A male Chihuahua states dozens of times throughout the film that he loves a little white Chihuahua and she is, "My Chloe, my heart." A gardener's dog asks a homeowner's dog for a date several times and is turned down and one time he states, "If you ever need someone to lick inside your ears or chew the hard to reach places, I'd be honored"; she refuses.
► Several small dogs in jeweled clothing parade into a dog salon to the background song lyrics, "I'm too sexy for my shirt, too sexy for the cat, too sexy for this song."
► Several scenes depict women in bathing suits around a hotel swimming pool (we see bare legs to the hip, bare abdomens and considerable cleavage). Three brief beach scenes show young women in very skimpy bikinis that reveal full thighs and legs and considerable cleavage while several young men are swimming bare-chested and wearing knee length-shorts. A young woman wears a short dress that reveals her bare upper thighs. Several scenes feature women in low-cut tops that reveal cleavage and bare arms to the shoulders. A young woman gets out of bed wearing a big, loose T-shirt and skimpy pink panties (we see full thighs and legs and briefly see her cloth covered buttocks).

VIOLENCE/GORE 4 - Three scenes show dog fights among dark Aztec ruins, with jumping and wrestling dogs but no wounds or blood; dogs knock one other down (no injuries are shown), a dog knocks down a man (he gets up unharmed), the winners of the fights shout and bark loudly to show authority, and a team of six police officers with drawn guns capture two men (no shots are fired); one of them is shown handcuffed and placed into the back of a police car.
► Five scenes show a man driving a van and following a fierce dog on the trail of a small dog that he wants to capture and hold for ransom. Several scenes show a large dog snarling, barking loudly and chasing other dogs on streets, in rail yards, and through woods, with the man running or driving behind them (no one is injured in these scenes). A small dog jumps on a large dog's head, the small dog is knocked off and lands unconscious at the base of a stone structure (the dog lies motionless), and a male dog rushes to her side and cries after saying, "She's gone" (the small dog is OK).
► A small dog is stolen by a man and placed into the back of a van with other dogs; she shivers and cries in fright. We see fighting dogs held in small cages in a warehouse and understand that they are used for illegal dogfights, and other dogs talk about a large dog and say they are afraid of him. A small dog is placed into the fighting ring with a large dog, people standing around the ring laugh, clap, and cheer loudly, the larger dog pulls a dress off the smaller dog and she runs away. Three cougars in the desert confront two dogs, the cougars shriek at the dogs, and one dog barks loudly at them and holds them off. Many small dogs bark loudly and fiercely, a cougar shrieks and jumps into the air and runs away with two other cougars.
► A rat and a lizard fall out of a piñata, which they had entered to eat candy, they scare a woman and a child and are chased by a man who hits them several times with a broom as they knock products off shelves; one of them bites the man's finger as they escape through a hole in the wall (we see no blood or wound).
► Two dogs jump into and out of moving railroad box cars and land safely, and in another similar scene two dogs hang out the door of a moving boxcar, looking as if they might fall out, but scramble in safely. A dog runs through a dining car on a train, breaking dishes and sending food flying, he jumps out a door, lands on his side in the gravel beside the track, gets up, limps a couple of steps, and another dog jumps onto the first dog (both dogs are uninjured).
► We see dogs in a police training academy that run an obstacle course and two are being trained to attack men in padded suits: we see one grab a padded arm in its teeth and another grab a thick towel in its mouth (no one is injured).
► A parade for The Day of the Dead is shown: a man juggles three machetes, we see several jeweled skeleton masks on men and women and a people dressed as ghosts, and a large dog explains that this is how humans remember their deceased relatives.
► A young woman loses her aunt's dog and frantically searches her hotel room looking scared and worried, and she tells her friends that she is going further south to Mexico City to look for the dog. We see a dog lost in a big city, frightened that she will never survive and throughout the film she becomes dirtier and dirtier. A dog cries briefly twice when he believes that the female dog he loves is lost and never coming back or may be dead. Dozens of stray dogs are shown roaming dirty streets, sleeping in cardboard boxes, and lying in filthy alleys among spilled garbage. A dog dunks another dog in a mud puddle to cover her scent because a dog is chasing them. A dog is thrown out of a restaurant and into a garbage-filled alley and screams as she sees her dirty reflection on the mirrored panel of the back door. A dog takes a mouth full of wet dog food and puts it into a woman's shoe; she steps into it and screams loudly. A dog sits in the grass in a park, a man makes a face, places a baggie over his hand and bends down off screen (it suggests picking up dog droppings, but we do not see it). A birthday cake's decoration shows a dog lifting its leg on a fire hydrant, but shows no urine. A dog digs holes in a garden and gets covered with dirt and fertilizer, another dog says he stinks and there are three additional references to bad dog smells in the film.
► A dog yells at another dog for being taken in by "con men." Many small dogs chant loudly, "No mas (no more)" and practice loud, fierce barking and one of them declares that they are warriors, not toys and one of them barks loudly and later roars like a lion three times.
► In a street scene, an iguana pretends to half swallow a rat to gain pity from a rich Chihuahua, which saves the rat and then gives it a piece of jewelry.

SUBSTANCE USE - Three scenes show police dogs sniffing out drugs; we do not see any drugs or anyone using anything. Two women have wine with lunch, two young women receive large pineapple drinks, two restaurant scenes show diners with glasses of wine, and an outdoor nightclub scene shows bottles of beer on tables.

MESSAGE - Discover your integrity and that of your pets. Pet ownership is a lasting commitment that requires research and thought. 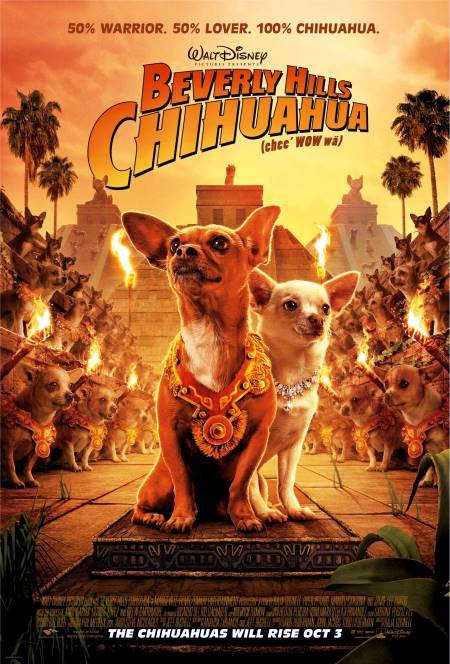