CGI animated feature based on the Norse epic poem about the hero who saved a Danish kingdom from a monstrous creature, which was killing and terrifying the people: After dispatching the creature, Beowulf becomes the new king, but the creature's ruthless and seductive mother will use any means to ensure revenge. With the voices of Ray Winstone, Anthony Hopkins, John Malkovich, Robin Wright Penn, Brendan Gleeson and Angelina Jolie. Directed by Robert Zemeckis. [1:53]

SEX/NUDITY 6 - A female creature rises out of the water in front of a man: her form is revealed and lightly veiled by what looks like gold paint, but breasts and nipples are clearly visible, as well as buttocks, her abdomen and legs (the camera lingers as she rises); the same gilded female creature rises out of the water in another scene and her female form is clear but with slightly less detail than previously. A mermaid-like creature has a female form, with breasts, but has a tail; pulls a man under the sea and the man drops his dagger when the creature swims close to him.
► A man holds a woman close to him and tries to convince her to have sex with him (there is a remark made that implies that he is loud when he climaxes); she refuses, pushes him away, he asks her for oral sex and she slaps him in the face.
► A man is nude for an extended period: his bare buttocks, back, chest and legs are visible and there are a few instances where his genitals are obscured from view by objects or other characters. A man removes his clothing and armor and stands in front of a woman (she looks down below his waist, turns and runs away); he then removes his undergarment and walks nude through a hall (his bare buttocks, back, legs and chest are visible). We see two women who appear to be nude (we see their bare legs and backs and shoulders) wrapping themselves in a blanket and running away. A woman wearing a very low-cut dress leans over to scrub a table, a man watches, the woman moans suggestively with each stroke and the man makes a remark about his loins burning. A man stands up and is lightly wrapped by a toga-like drape: we see his bare leg and hip, the drape slips off his shoulder and his bare buttocks are visible. A woman's dress is laced up the front and cleavage is visible.
► A female creature speaks seductively to a man, seduces him, asks him to give her a son, they kiss and hold each other and it is implied that they have sex.
► A husband tells his wife to come to bed and that she must do her duty and give him an heir; she refuses and makes reference to his having had a sexual relationship with someone else.
► A man kisses a young woman, who's his mistress, and his wife walks past them. A female creature hovers over a dead man and kisses him.
► A man has a dream that a woman comes to him, tells him that she loves and wants him, and she sprouts pointed teeth and snarls loudly at him; the man wakes up with a start.
► A female creature appears in the sea (her bare shoulders and the tops of her breasts are visible) and tries to entice a man to join her; he stands at the water's edge and the scene ends.
► A man reaches for a woman and pulls on her arm while asking for a kiss, but she pulls away. A husband caresses his wife's cheek tenderly. A man and a woman lie together sleeping and covered with a blanket (we see her bare shoulders).
► A man talks about another man having killed his two brothers when he discovered them having carnal "knowledge" of their mother. Men talk about having sex with many women. Several men sing a song with sexual lyrics. A man makes a joke about another man's sexual partners being sheep. A man calls a hall, "a hall of fornication."

SUBSTANCE USE - Many people are shown drinking mead until the point of drunkenness in several scenes, a man lies unconscious on a table after he gets drunk, a man falls asleep during a celebration after he gets drunk, mead is poured into a goblet and the goblet is carried to a man who drinks from it, and a large hall is called a mead hall and is used for celebrations.

MESSAGE - Greed and the lust for fame can cause men to make foolhardy choices.

(Note: A man makes a remark about the Christ God killing all the heroes and leaving weeping martyrs behind.) 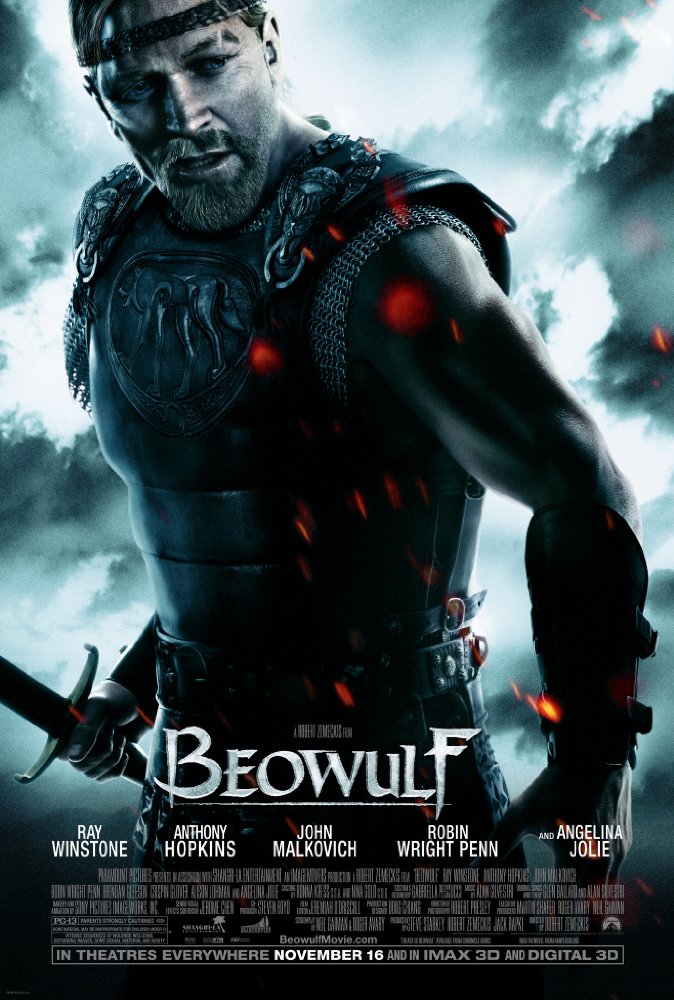