Jerry Seinfeld provides the voice for Barry Benson, a New York bee, fresh out of college, who is disillusioned at his only possible career choice: making honey. After he strikes up a friendship with a human, he explores the world of humans and is shocked to discover that humans are mass consumers of honey. That's when he decides to sue the human race for stealing the bees' honey. Also with the voices of Annette Bening, Chris Rock, Renee Zellweger, Oprah Winfrey, Ray Liotta, Larry King, Mark Moseley and Rip Torn. Directed by Stephen Hickner & Simon J. Smith. [1:30]

SEX/NUDITY 2 - During questioning by a lawyer a bee witness is asked about the nature of the relationship between a bee and a human woman, implying there is more than friendship, and uses the term "bed bug." A bee develops a crush on a human woman.
► A boy bee has a romantic fantasy about a human woman (we see the bee and the woman on a date, having a picnic, etc.). A bee and a human are shown on a date.
► There are several references to "getting girls" and "meet a lot of girls" (as in girl bees) and lust is mentioned by a bee discussing why another bee is slacking off. A bee tells his friend that another bee is hot, and the friend reminds him that all the bees in the hive are cousins. One bee talks about "shacking up" with a grasshopper. Two bees talk about how spiders are supposed to be the "hottest," having all those legs. A boy bee accuses another male bee of "making out" with a human woman and describes her as his girlfriend. A bee talks about a cricket he used to date and how her legs "kept him up all night."
► A photo of a male bee dressed up to look like a queen bee is shown and the bee is described as being a "drag queen."

VIOLENCE/GORE 2 - A woman kills a mosquito and she and a bee laugh (we see the smashed remains).
► Insects are shown hitting and sticking to a windshield; some bugs are only pretending to be dead and others really are.
► A bee finds a dead insect in the cooling system of a car (we see the insect with his eyes open, frozen in an ice cube).
► A family gets into a car accident when a bee enters the car and they try various methods of killing the bee -- the driver is distracted and runs into a couple of other cars but the passengers inside the car appear to be unhurt. A man tries several times to kill a bee, including with flames made from spray air freshener and a lighter, but the bee is saved and remains unhurt.
► A bear is shot with a tranquilizer gun (the bear falls off a tree limb, its pig companion is alarmed and the police talk to the pig about how the bear will be all right after a while). A hive of bees is shown being sedated with smoke.
► A bee stings a man in the buttock, the bee does not die, his stinger is replaced with a mini sword used in sandwiches and he is shown in a hospital bed, weak and on an IV of honey. A man and a bee duel: the man uses a thumb tack and the bee uses its stinger, and neither is hurt. A man tries to kill a bee but the bee is saved, and a man tries to suck a bee into a hand vacuum cleaner.
► One bee is shown testing helmets while being swatted with a shoe, a newspaper and a fly swatter, and is shown to be OK, reappearing in later scenes again testing helmets and staggering a little. A bee gets inside the engine of a car and is burned by the mechanical parts of the car, but recovers quickly and is unhurt. A bee gets stuck to a tennis ball while it's being batted around by two humans; the bee is shown screaming in terror each time the ball is hit but does not get hurt.
► A bee and a woman smack each other in the face repeatedly. A woman smacks a man with a newspaper. A man smacks a bee off the shoulder of a woman.
► A woman falls off a large parade float after another person removes the ladder she was climbing down (we see her fall, hear her groan but do not see her injured). A man pushes another man over. A woman is roughly handled by the police, and a man is arrested and roughly handled by the police. A man is knocked out by an inflatable raft. A bee fantasizes about a woman crashing a plane into a rock and the plane exploding; we don't see whether the woman is hurt, but the bee cries out her name. A plane has trouble while in flight but it lands safely.
► A bee and a woman talk about making a suicide pact in which the bee stings the woman and the woman steps on the bee (they decide against it). Two bees discuss the death and funeral of another bee, which stung a squirrel, saying, "Everyone knows if you sting you die." A bee talks about how a cousin died by "Italian Vogue," meaning being struck with the magazine and killed. A bee explains how jobs open up in the hive when other bees die, and says, "Die six times" in an attempt to show how many bees die at any given time. A bee gets into a car with a family and the family shouts, "Get him" and "Kill him" (the bee isn't hurt). A man threatens to "knock someone out." A bee suggests that another bee should sting someone in the eyes.

SUBSTANCE USE - A woman is shown drinking wine twice, a bee sips what appears to be a martini, and a mosquito talks about drinking moose blood as if it is an exotic drug. Bees are said to be addicted and forced to smoke, as a beekeeper uses a smoker to sedate them.

MESSAGE - Even if you have a little job, if you do it really well it can make a big difference. 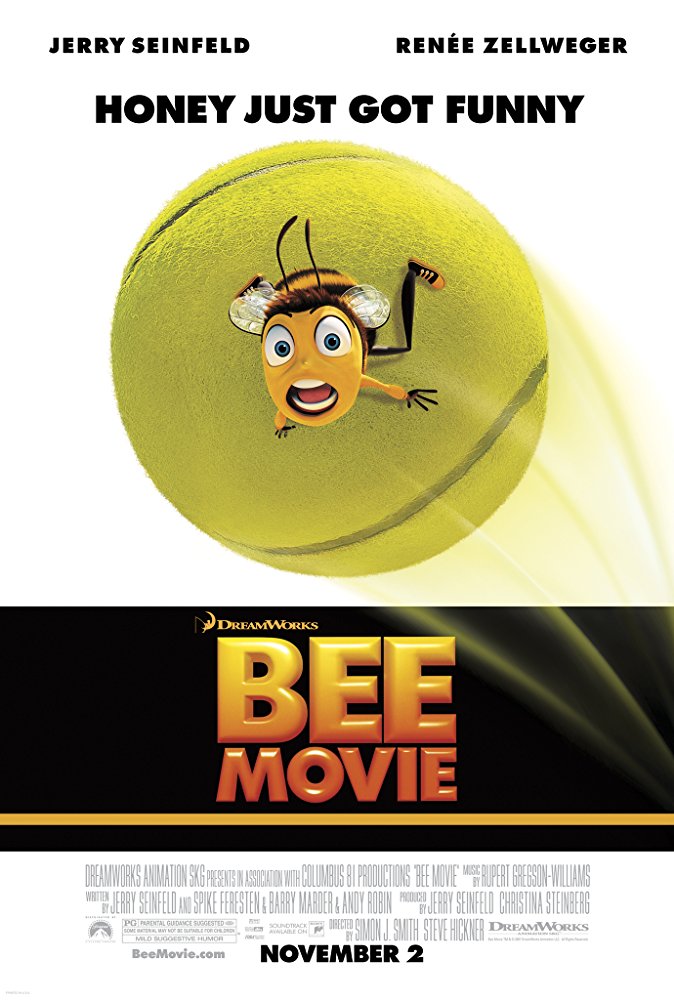