Upon submitting his formal request to retire, a Marine staff sergeant (Aaron Eckhart) is called back to active duty when what initially is thought to be meteors crashing into the oceans around the globe turns out to be extraterrestrial invaders. The battle to save the world begins. Also with Bridget Moynahan, Michelle Rodriguez, Michael Pena, Adetokumboh M. Cormack, Ramon Rodriguez, Taylor Handley, Cory C. Hardrict, Ne-Yo, Jadin Gould and Bryce Cass. Directed by Jonathan Liebesman. [1:56]

SEX/NUDITY 2 - A woman kisses a man. A husband kisses his wife's pregnant belly.
► Several men tease another man about being a virgin and tell several women about him. A man says of a woman on a computer screen, "She's fine" and another man takes offense and identifies the woman as his sister.
► A woman wears a strapless dress that reveals cleavage and bare shoulders. We see swimmers and surfers in a beach scene: the men are bare-chested and the women are in swimsuits. We see men's bare legs when wearing shorts.

VIOLENCE/GORE 7 - Many aliens surround and attack Marines and civilians: they fire at each other, one Marine is shot and falls over an overpass onto the ground below (presumably dead but we do not see wounds), a car explodes and flips landing on top of another Marine (also presumably dead), a child is dangled over an overpass, she is dropped and a Marine catches her before she hits the ground and a man is shot in the stomach (we see a bloody patch on his shirt).
► A Marine is shot off the top of a building (he is completely engulfed in flames). A man detonates explosives and is engulfed in flames along with many aliens. An enormous alien vessel moves up from underground, is targeted and explodes causing Marines on the ground to be thrown. We see large alien figures rising over the rubble of sailing vessels in the ocean and they fire on civilians on shore: several people fall to the ground but we don't see wounds. Marines wade through a sewer and find aliens that they engage, exchanging fire (we see many dead aliens floating in the water). A wounded Marine fires at an alien, the alien falls back into a pool, it rises up again and several Marines shoot it again and then throw a grenade in the pool (the alien does not rise again and we see no injuries). Several Marines are fired upon, and one Marine is shot and we hear him scream (we do not see blood). A Marine is struck in the helmet and we see the top and side of his head badly burned and smoldering (bloody flesh is visible); we see him later with a bloody bandage wrapped around his head. A Marine is shot in the leg (we see blood on his pant leg).
► A helicopter filled with Marines is fired on and the passengers are jostled and a few look frightened. An explosion in front of several Marines leaves one with a smoldering helmet (we do not see an injury).
► An armored vehicle is driven through streets crashes into numerous aliens along the way (we see aliens crash onto the hood of the vehicle and one is shown being crushed under the vehicle). An alien lands on the windshield of a vehicle, it is still alive and is shot by a Marine from inside the vehicle; the Marine is splattered with alien goo. A helicopter filled with wounded Marines is attacked in midair, it explodes and the pieces crash to the ground. An alien flying vessel is blown up when a gas station explodes (we see the burned out rubble of the vessel on the ground).
► A wounded alien is dragged into a building and examined, a man and a woman plunge their hands into the body of the alien and liquid spurts and sprays out, we hear squishing, we see the internal organs of the alien and it gurgles and twitches while the man drives a knife into its body repeatedly until it dies.
► We see a badly burned body slumped in a car (red and charred flesh is evident). We see many dead bodies with twisted limbs and spots of blood along a roadway. Marines enter a building and find several dead bodies (we see some blood on a couple of bodies). We see the bodies of several dead Marines lined up and wrapped in body bags.
► There are scenes of attacks at night where shots are illuminated in the sky and we see explosions along a cityscape. We see a city in ruins and in flames as a helicopter flies over a city. A ship is tipped on its side after something crashes into the ocean next to it. We see something crashing into the ocean and huge plumes of steam and smoke come up from the water. Many civilians and Marines hide inside a bus and large alien flying vessels hover over it trying to find them.
► A young boy sits with his wounded father and pleads, "Don't leave me" (the man dies). Marines are ordered to "kill anything that is not human." A Marine says that putting dog tags in a shoe is "...in case his head gets blown off, so they can identify the body." A young man says, "My brother came home in a box" referring to his brother having died in combat. Several Marines talk about a staff sergeant getting "A couple of guys killed on his last tour." A Marine yells at another Marine trying to keep him from panicking. We hear that there are many areas being evacuated. A man says, "The world is at war." A Marine asks his commanding officer, "Are we leveling Santa Monica?" We hear reports of massive casualties. There are many conversations and news reports of meteors moving through Earth's atmosphere and crashing into oceans. We hear references to unidentified enemies in news reports. We hear news reports of an alien invasion. A man tells another man, "You're expired." A man tells another man, "It's not right to see a man your size sniffing flowers" when they are helping a woman choose flowers for her wedding. A Marine talks to a psychiatrist about feeling better (apparently suffering from PTSD).
► A man vomits after drinking too much; he burps and we see goo and hear a wet splatter. A man has a large scar on his cheek. People are shown with bloody cuts and charred faces throughout the movie.

SUBSTANCE USE - Several men and women drink alcohol on a beach and one man drinks to excess and eventually vomits.

MESSAGE - When aliens attack, send in the Marines. 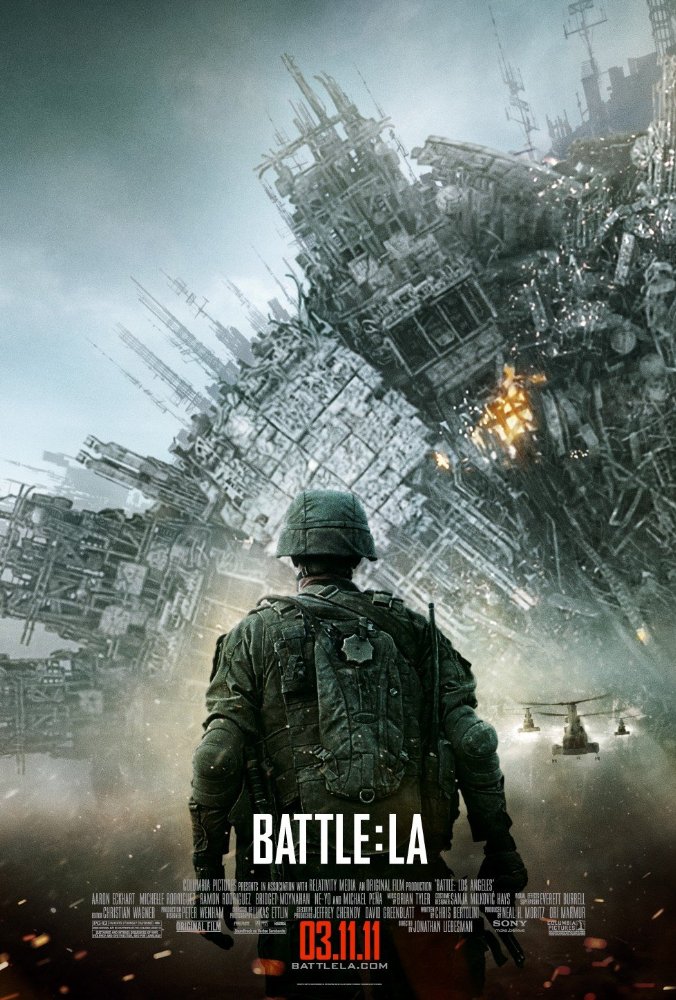