SEX/NUDITY 2 - Mild sexual innuendo. A woman hugs and briefly kisses a man. A woman sticks out her extremely long tongue at a man in a somewhat suggestive manner; she also wiggles her tongue and licks at another. We briefly see a couple of unclothed female mannequins.

VIOLENCE/GORE 6 - Lots of people are shot with lasers (sometimes they're only stunned, other times they appear to be killed; we don't see any blood but sometimes hear squishy noises upon impact). A man shoots off another's hand (no blood is visible, but we see the wrist stump) and a man's arm is blown off (we only see his torn jacket sleeve). A man is dropped over the side of a cliff, and falls for awhile (we don't see him hit the ground, though). It's implied a man wearing a ring of explosives around his neck is blown up (we don't see it happen, but we see the horrified expressions of others near him). We hear a loud cracking noise after a man jumps to the ground and presumably breaks his ankle. A man runs through several plate glass windows (he doesn't appear to be cut at all). People start choking and saying they're being poisoned when smoke comes through vents in their room, then they're given what look like swimmers' nose plugs to help them breathe; in one scene, a man's plug is removed and he nearly suffocates. During an air fight several planes and ships are blown up and several buildings are bombed, causing lots of rubble to fall onto people below. A man's airplane crashes into a structure and he's left hanging in his seat high above the ground. Several scuffles and fights during which people are elbowed in the face, thrown into walls or onto the ground, tackled, punched, kicked, flipped, and head-butted; many times people are grabbed and carried by the throat and then thrown on the ground. A man is hit in the head with a metal stick, another man is hit in the head and body several times (we only see the first blow), a man repeatedly hits what he thinks is a monster before realizing it's a statue, a man smacks the back of another's head, a couple of men are backhanded in the face, a man is lead by a chain around his neck, men holding stick spears lunge at each other but don't strike, a man lunges at another with a piece of glass, a man cuts another with a shard of glass, a man grabs another by the hair and shoves a rat into his face, a man shoves another's head into a tub of green goo that's supposed to be food, and during a riot scene people throw things at one another and hit each other with sticks. Some threatening with guns and several scenes during with people are chased and shot at; during a riot scene people exchange gunfire. A horse is shot with a laser and falls (we later see it alive) and we see a man shoot a cow's leg (there's no blood, though we see the leg fly off; the man shoots off several other cows' legs, but we only see him shooting and hear the cows moaning). A galloping horse and its rider fall to the ground. An entire planet is engulfed in flames and then explodes into pieces. A man shoots boxes of explosives in his plane, causing a large explosion that knocks many people and buildings down (he's obviously killed in the process). Bombs crack and then shatter glass enclosing a city, causing large shards to fall to the ground. We see men eating a raw rat (we see the bloody glass used to cut the rat and see a little blood on one of the men's mouths). A man holds up a severed head. A man has bloody scratches on his face and arm.

LANGUAGE 3 - Many mild obscenities, an insult, and several instances of name-calling. 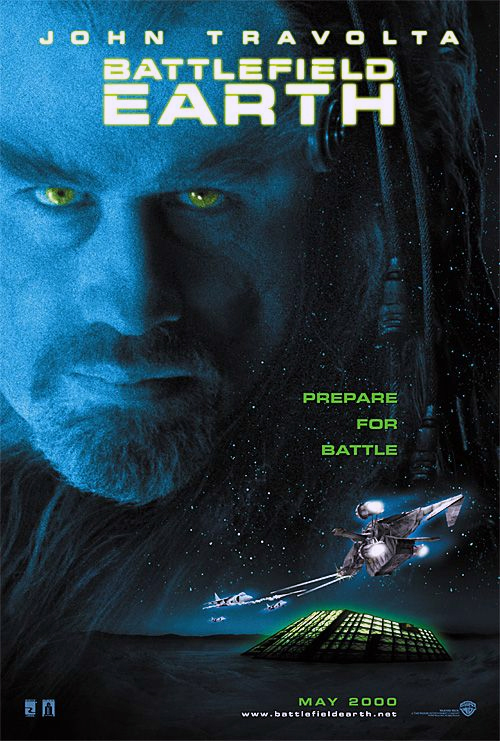