In this animated comedy, when the humans turn their backs, the barnyard animals take on human characteristics, and are able to speak, walk on two legs, drive cars, party and plan as a community. Their leader is Ben, a male cow, who has to contend with his son Otis, who would rather have a good time than be responsible. But when Ben is killed by coyotes, Otis is left in charge. With the voices of Kevin James, Courteney Cox Arquette, Danny Glover, Sam Elliott and Wanda Sykes. Directed by Steve Oedekerk. [1:30]

SEX/NUDITY 2 - A female cow kisses a male cow on the cheek. A male cow admires a female cow, and he flirts with her. A mouse flirts with a female cow in a couple of scenes.
► A male cow is alarmed when he realizes that a female cow is pregnant. A male cow dances by thrusting his hips and wagging his udders.
► A police officer talks about chasing a car with teenagers, and that it is "nothing that a strip search won't cure." A mouse sings a song with suggestive lyrics and body movements (he wiggles his hips and licks his lips extravagantly).
► Two women in a diner are shown wearing low-cut tops that reveal cleavage. A boy's pants have slipped down revealing his buttock cleavage.

VIOLENCE/GORE 5 - A male cow fights with six coyotes, the cow punches several as they try to bite him, they repeatedly pounce on him, he is pushed onto the ground and the coyotes again pounce on him, the male cow holds one coyote by the throat against a tree and threatens him, and the coyotes leave.
► A male cow collapses and dies from wounds inflicted by a pack of coyotes; we then see a marked grave where a farmer has buried the male cow.
► Coyotes creep into a barnyard (their eyes are glowing orange and they are mangy with very sharp teeth and claws): they enter a chicken coop, one coyote grabs a chicken by the throat and five other coyotes enter threatening to take one each.
► Many coyotes are knocked out by animals that attack them: three male cows in a car jump into the coyotes' den and pound several of them with sticks, a pig jumps into the den and lands on several squishing them, gophers pop up out of the ground punching several coyotes, a mouse crawls into a coyote's ear and the coyote screams and runs, a donkey kicks several coyotes and a weasel bites a coyote on the leg and says, "You taste like chicken." A male cow holds a coyote around the throat, raises his fist to hit him, drops him and hits him on the buttocks with a club, sending the coyote through the air.
► A pack of coyotes chases a rabbit down its hole. A coyote with very sharp teeth holds a chick up over its mouth and prepares to eat it. We see chickens tied together as snarling coyotes pace back and forth and threaten to eat them.
► A male cow chases coyotes that are chasing a rabbit, the male cow is attacked by the coyotes, fights them off briefly and is then threatened by the leader of the coyotes. A male cow tosses a coyote through the air several times, and other coyotes attack the male cow and surround it.
► A donkey kicks a man in the head several times (we see a bump grow on his forehead and he lies unconscious). An animal throws an apple hitting a man hard in the head.
► A male cow and several other animals surf down a steep hill, crashing through shrubbery and nearly hitting a tree, jump from a high peak and eventually crash into a chicken farm and feathers fly everywhere (no one appears injured). Four male cows steal a car, drive recklessly and drink bottles of milk as if they were beer. Several police cars and a police helicopter chase a car being driven by four male cows; the male cows drive off the road, crash into a tree and run on foot through a forest.
► Four male cows shove a boy out of his bed and tease him, the boy screams and the male cows scramble to get out of his room before they are discovered by the boy's parents. A boy pushes a sleeping cow over and the cow struggles to get back up.
► An animal called "wild Mike" dances wildly in a few scenes (spinning like the "Tasmanian Devil" that has been depicted in other cartoons); in one scene "Wild Mike" spins around in a woman's hair and the woman screams.
► A gopher hits another gopher off-screen (we hear the thud). A male cow stands watch for coyotes in a few scenes.
► Animals use mannequin arms to pay for pizzas being delivered to the barn and one arm is dropped to the ground in front of the delivery person (he does not seem alarmed but rather very excited about getting an arm).
► A weasel makes comments about eating his barnyard companions in several scenes, and seems to be having trouble resisting the temptation (he says to a chicken, "I could eat your head right off."). What we think must be a weasel imagines a coop full of chickens as plump, roasted legs for him to eat (he does not eat anything). A woman talks about having seen a cow outside her window and that it looked like a ghost or a reaper. A police officer talks about chasing a car with teenagers and that it is "nothing that a strip search won't cure."
► A male cow stumbles and breaks through a fence, a pig flops into a puddle of mud and a horse falls back off a chair. A young male cow swings a fishing pole several times hitting an older male cow in the face, and then wrapping his legs with the line; the older cow falls into the water.
► A dog sniffs a sheep's bottom. A boy wipes his runny nose on the back of his hand (we see goo). A pig blows a bee out of its nostril a couple of times. A mouse defecates pellets while sitting on a pig's head (the pig is upset).
► A 13-year old dog is drawn as very frail and nearly hairless. Animals are shown riding a "mechanical man." A male cow says he is lactose intolerant.
► Coyotes are described as ruthless and desperate creatures. We hear that coyotes have taken several chickens out of the coop, including a chick. We hear that a cow's husband, along with many other animals on a farm, was killed during a storm. An animal says about a man, "We gotta' whack him." A donkey tells a male cow that he will end up with "an extra hoof right up his..." A boy is very disrespectful to his mother. Animals talk about dogs licking themselves and drinking from the toilet. Animals watch a cow in labor and one says, "That looks like it hurts" and they worry about the calf getting stuck. A male cow talks about having found his adoptive son alone in a field. A male cow says "I swallowed my cud" after he is startled.

SUBSTANCE USE - During party scenes animals are shown drinking "milk and honey" and a few of them may appear to be inebriated. Four male cows steal a car, drive recklessly and drink bottles of milk as if they are beer.

MESSAGE - Standing together to solve a problem makes everybody stronger. The best leader is the one that cares the most. 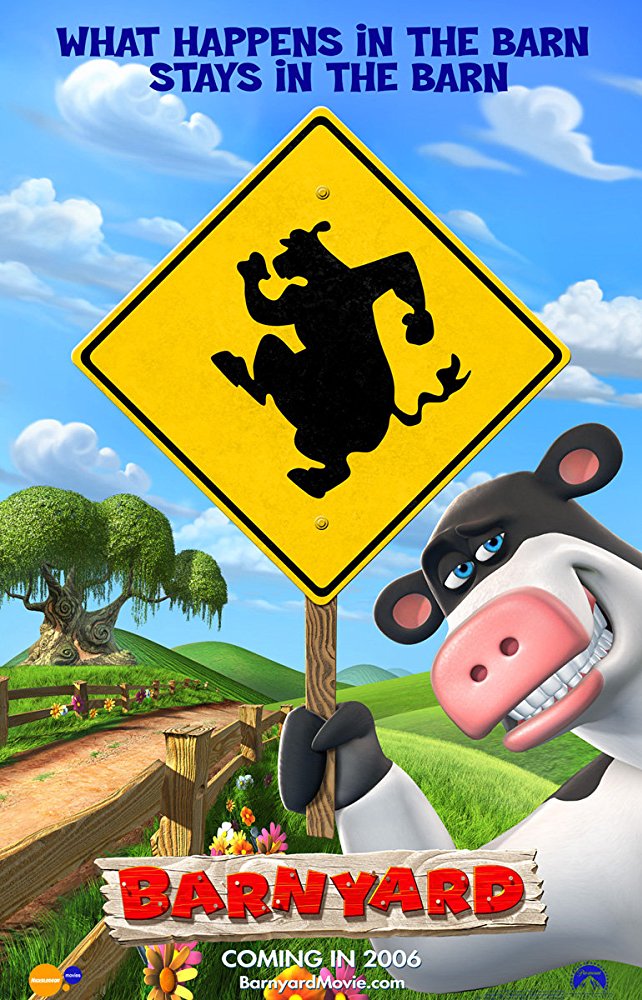