A doctor (Nina Hoss) in 1980s East Berlin is banished to a halfway house and a small country hospital after being arrested for applying for an official release from the German Democratic Republic. Also with Ronald Zehrfeld, Mark Waschke and Rainer Bock. Directed by Christian Petzold. In German with English subtitles. [1:45]

SEX/NUDITY 5 - A man and a woman run toward one another in the woods as the man takes off his jacket and the woman is implied to be unbuttoning her dress (sex is implied); we then see the man and the woman getting dressed as they lay on the ground (we briefly see the woman's bra as she buttons her shirt).
► A man helps a woman through the window of a hotel room and they kiss passionately on a bed; the woman unbuttons the man's shirt and kisses his chest until they are interrupted when we hear an unseen woman in another room panting and moaning sexually; the man explains to the woman that another man had "found a girl" (it is implied that the other two are having sex in another room). A woman kisses a man. We see a man and a woman embrace as another woman watches.
► We see a woman wearing a very short negligee-type dress and it is implied through a conversation with another woman that she is a prostitute who receives gifts in exchange for sex. A woman asks a man if in a story a teen girl and a man "sleep together" and the man says no.
► We see a woman's bare back as it is implied she is being forced to undergo a strip-search and cavity search, performed by a female police officer; the officer asks the woman to spread her legs and lean forward (we do not see the woman bending over). It is implied that a woman is strip-searched by another woman when we see a police officer allow a female police officer into a room and the female police officer puts on rubber gloves. We see a woman wearing a full slip when a man walks into the room and it is implied that he sees her. We see a woman wearing a robe (no nudity is visible).

VIOLENCE/GORE 5 - A woman sneaks away from a prison work camp and we see her crawl under a barbed wire fence; her leg catches on the barbed wire and she yelps in pain, holding her leg and we later see her, filthy and exhausted, collapse outside a doctor's door and the doctor gives her two injections to help her (caffeine and a pain killer).
► We see two police offices and two doctors carrying a young woman down a hall and she shouts in pain until a female doctor talks to her and calms her down; we then see the female doctor and a male doctor discussing how the young woman has meningitis and the female doctor holds the weeping young woman as the male doctor performs a spinal tap (we do not see the needle enter the young woman's back, but we do see the male doctor holding a large needle).
► We see a young woman being dragged out of a hospital by two police officers and the young woman screams and resists being carried; a female doctor comes out and hugs the young woman, who is then driven away and back to a prison camp.
► A man on a gurney is wheeled down a hospital hallway and a nurse explains to a male doctor that the man had been found on the ground with a knee dislocation and head injury after a fall from a three story building; two doctors incubate the man, he gags and it is implied that he is throwing up into the tube (we later hear a woman explain that the man had been attempting to kill himself and needed to be reported to the authorities).
► We see a man and a woman examine a boy's broken ankle as we hear the man explain that the swelling on the ankle has gone down and he needs to remove drains (no gore is visible, but it is implied that the man is removing a drain from his broken ankle as the boy writhes in pain momentarily). We see a male doctor giving a woman an injection and we hear him explaining to an older man that the woman "will not suffer" after he gave her a morphine injection; the doctor later explains to a female doctor (who had watched the man perform the injection) that the woman is dying of cancer.
► A woman shouts at a man, saying that a young woman is in a prison work camp that is an "extermination camp." A girl shouts from her hospital room (she is having a nightmare) and a female doctor calms her. We hear the sounds of a police officer sorting through a woman's room in an apartment house and we see the room in disarray; the woman later tells a man that her room was searched because she was missing from her apartment house for a few hours. A man tells a woman that he had been removed from a hospital after he and a woman accidentally switched incubators from Celsius to Fahrenheit, causing excessive pressure in the premature infant incubator and blinding two infants; the woman then questions the man, asking if his story of blinding two infants is true. Two female and one male doctor look at X-rays of a man's head, and the male doctor explains that the man has a large blood clot that needs to be removed after he is stabilized. A woman tells a man (both are doctors) that a man needs a surgery after a blow to his head has caused him to lose all emotion (we see the man in question in a hospital bed throughout the movie with his head wrapped in a bandage). A young woman tells a female doctor that she wants to "remove" her child and the female doctor asks the young woman if she means to eliminate her pregnancy, and the young woman clarifies that she only wants to take her child out of the country. A man tells a woman about a story of a teen girl who was sick and was cared for by an old doctor; the woman asks if they sleep together (please see the Sex/Nudity category for more details), and the man then explains that the teen girl dies and the doctor returns to his family. A female doctor discusses with a young woman the attempted suicide of a man and the young woman explains that the man had attempted suicide after he believed she cheated on him and shows the doctor a suicide note. A male and a female doctor watch a sleeping, ill young woman and the man tells the woman that the young woman had previously "been faking" her illnesses, hoping to get out of a prison work camp due to being ill. We see a painting of a dead man surrounded by doctors, the man's bare chest is visible and it appears that he has a large bloody cut on his arm, being pulled open (it is a Rembrandt painting); a man describes the painting to a woman, saying that the doctors are dissecting the man's hand and we see the sinew of the man's arm exposed.
► A woman is startled and drops a cup and saucer that break on the ground in front of a man.

SUBSTANCE USE - A doctor gives a young woman two injections to help her (caffeine and a pain killer). A woman drinks champagne. Throughout the movie we see men and women smoking cigarettes, a woman reads a young woman a book and we hear a section of the book about a boy smoking cigars, and a man chides a woman for having cigarettes hidden in a case. 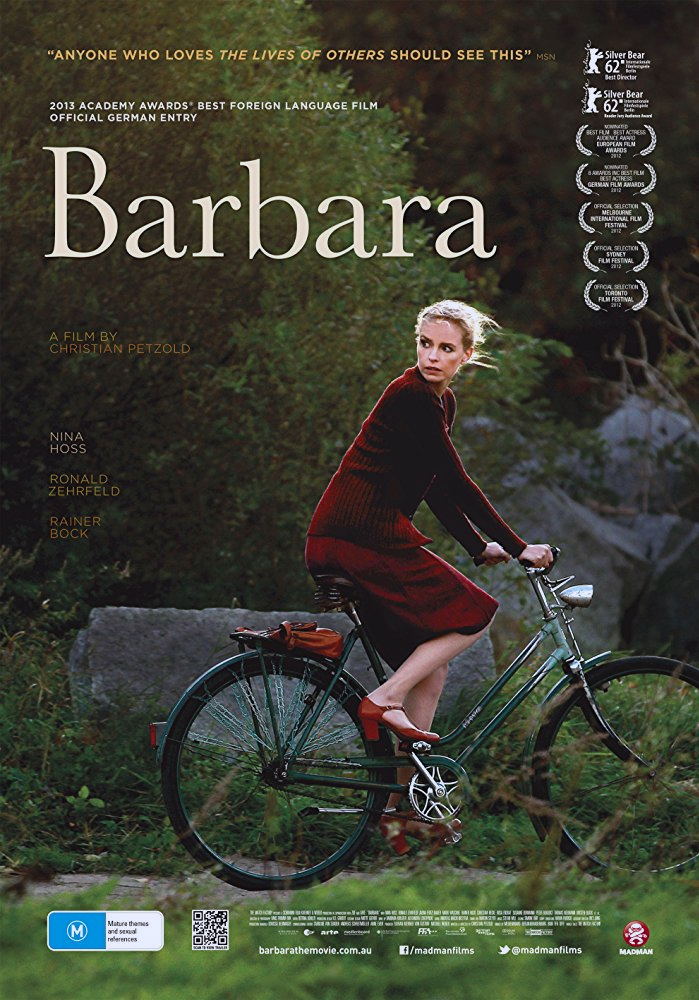