A boy (Jackson Nicoll) is traveling cross-country with his widower grandfather (Johnny Knoxville) after his mother (Georgina Cates) goes to jail and he experiences a variety of crude practical jokes perpetrated by his octogenarian mentor; they involve funeral homes, biker bars, male strip clubs and children's beauty pageants. Also with Spike Jonez. Directed by Jeff Tremaine. Some English subtitles appear for unclear conversations. [1:33]

VIOLENCE/GORE 5 - An elderly man in a hospital waiting room laughs as a nurse tells him that his wife passed away and at the funeral, he states that he and his dead wife spent all their time in combat when his adult daughter and young grandson interrupt him, step outside the room and argue loudly; they re-enter the parlor and struggle over the corpse, because the daughter stole the pearls off it causing the body to fall out of the coffin and onto the floor as mourners and singers rise and gasp; the choir begins a joyful hymn and the elderly man picks up the body and dances with it (men and women look shocked, mouths agape and eyes wide).
► An elderly man and a young boy ask two moving men to help wrap up the body of an elderly woman; the movers looked stunned, help wrap it in bed sheets and carry it out to a car trunk where the four people pray and the elderly man states that they have committed a crime (one mover steps away quickly and the other follows); the man and boy drive to a motel, where they get the body from the trunk, drop it accidentally at the feet of another man and toss it into a room (the neighbor looks puzzled as the scene ends); later, the elderly man and the boy throw the body over a bridge into the river, where it floats.
► Bikers that ride to raise awareness about child abuse rescue a young boy from his father in a biker bar; they hold both the father and the grandfather back when a fistfight between the two men begins after the older man cries and asks to have custody of the child; one biker tells the father, "You ain't gonna kill anybody, brother. You're looking at the Angel of Death right now" as the father screams about losing his meal ticket of $600/month; the bikers help the grandfather take the child away.
► At a market, an elderly man and a boy steal bread from a bag, lunchmeat from a package and eat sandwiches in an aisle; the man stuffs a whole loaf of bread down the front of his pants and a manager confronts the two while another manager chases them as they run out of the store and the manager blocks the driver's side door of their car and curses at the man. A boy punches an elderly man in the trousers (no injury occurs). A young boy pushes an elderly man in a grocery cart and overturns the cart, dumping the man on the ground (no injury is shown). An elderly man and a younger man argue loudly outside a diner about a broken penguin statue on the sidewalk that the old man damaged with his car.
► At an estate sale, an elderly man sits on his bed and asks a customer to punch the button on the control box; when she does, the bed folds up a dozen times, capturing the old man inside the mattress as he screams in pain and the woman trembles and hyperventilates. An elderly man tries to ship a boy in a large carton at a FedEx type-store; the boy makes noises and talks inside the carton, scaring the two clerks who gasp and squeal and one of them screams as the boy slaps the lid open. Stopping for gas at a gas station, an elderly man's driver side air bag inflates into his face and he yells, "Ouch!"
► A grandfather and his grandson crash a wedding party and we see the man reach for a glass of champagne from a champagne tower beside a large cake and knocks the entire table over onto himself (people scream and panic, but the man is uninjured).
► A grandfather and his grandson flatulate loudly in a restaurant booth several times and other patrons shake their heads in disgust. An elderly man stands on his seat in a restaurant and delivers a spray of fake defecation to the corner of the room behind him and two diners stare in surprise; as the man and his grandson run out of the place, a woman tells a man, "He pooped!" A young boy flatulates in bed. A young boy tells a passerby that his grandfather smells like old farts.
► A man on a computer screen during a Skype conversation wears stringy hair and stark white facial makeup with black circles painted around his eyes and mouth; his jeans and shirt are dirty and wrinkled.
► A young boy drinks beer from a can and vomits it back up onto a sidewalk (we see the vomit from mouth to ground).
► An elderly man drives his car into a row of motorcycles and knocks one bike completely over.

SUBSTANCE USE - A child in the lobby of a law office tells other patrons that his mother loves cocaine and that it gives her bad breath and that she has to go to jail, a man lights a long bong (presumably with marijuana) in close-up and takes several puffs. and a child on a street corner tells passersby that his mother loves drugs and men and women stare at him. An elderly man drinks beer from a can and has a few cans of beer sitting next to him on a picnic table, a young boy drinks beer from a can and vomits it back up onto a sidewalk (we see the vomit from mouth to ground) and a woman tells the boy's grandfather that the boy should not be drinking, an elderly man and a boy carry cans of beer as they walk beside railroad tracks and wave at passing trains, a young boy wheels an elderly man sitting in a grocery cart to the pick-up window at a fast food restaurant as the man drinks beer from a can, an elderly man at a Bingo game takes out a blender and makes Margaritas at his seat (he drinks one) while women near him laugh and move to other seats, a man walks into a room and he drinks from a bottle of beer, a grandfather and his grandson crash a wedding party and we see the man reach for a glass of champagne from a champagne tower beside a large cake and knocks the entire table over onto himself (people scream and panic, but the man is uninjured), and a biker bar features several tables at which men and women sit and drink glasses of beer while a few more men sit at the bar drinking from glasses and bottles of beer. A man smokes a cigarette while several empty beer bottles are seen on a coffee table, and a man smokes a cigarette on a street corner.

MESSAGE - Grandfathers and pranks can be shocking. 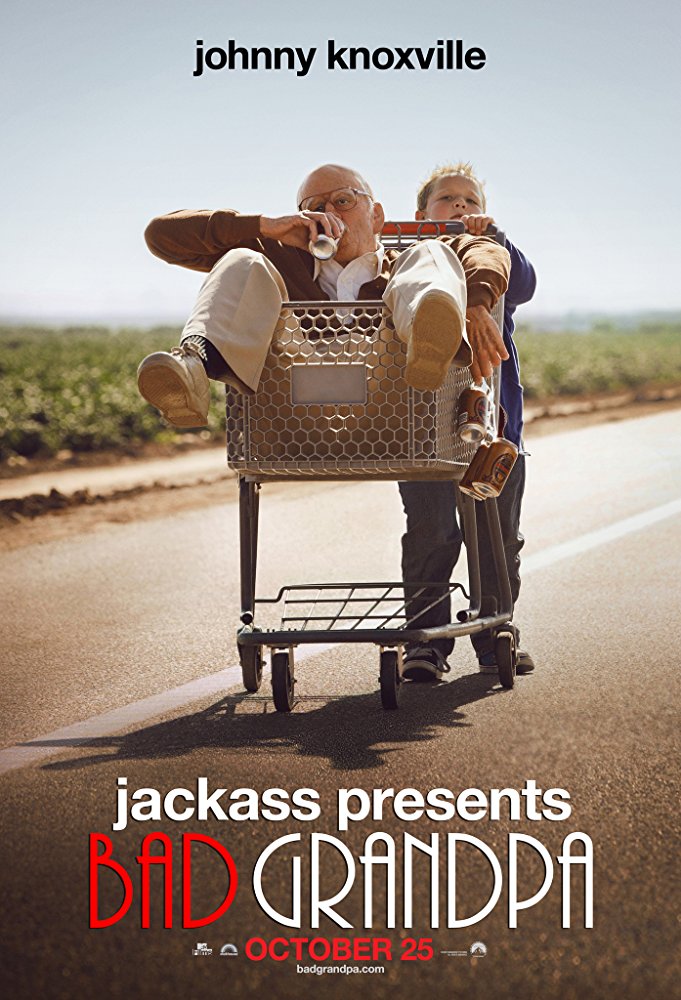