"August Rush" is the stage name of an 11-year-old musical prodigy (Freddie Highmore), who lives in an orphanage. His parents, an Irish rock guitarist (Jonathan Rhys Meyers) and a virtuoso cellist (Keri Russell), don't know he's alive, and are not together, but the boy feels certain that if he makes enough great music, his parents will be able to find him. Meanwhile, he runs away and ends up under the care of an aging street performer Wizard (Robin Williams) who takes advantage of his talent to make money. Directed by Kirsten Sheridan. [1:53]

SEX/NUDITY 2 - In a party scene, a few young couples embrace loosely and kiss briefly.
► A young man and a young woman sit together on a rooftop at night, hold hands and kiss briefly; the scene cuts to the next morning and they are lying spoon-fashion on a couch, covered by a blanket (they are fully clothed). A man and a woman meet again after 12 years and hold hands as they listen to a live outdoor concert.
► A young woman wears a strapless gown in a few scenes that shows bare shoulders (no cleavage) and in each progressive scene the gown rides down slightly to show a small amount of cleavage. A young woman wears a loose fitting jersey blouse that is off the right shoulder. A young woman plays the cello and the camera focuses for several seconds on her protruding abdomen, indicating pregnancy.

VIOLENCE/GORE 4 - A young woman runs into a street off-camera, we hear car horns, screeching tires, and shouting, and we then see the young woman covered up on a gurney in a hospital: There's no blood, she is wheeled into an operating room, wakes up and is told that her baby is dead.
► A guitarist has several arguments with his older brother, and he later returns to provoke a fight and asks his brother to hit him, whereupon he complies, bloodying the younger man's lip.
► Police raid an abandoned theater where many homeless children live, we see police cars race up and stop in front of the building with their sirens blaring and lights flashing, children run outside into the cold, and a man yells and charges a police officer, knocking him over into some trash and the scene ends.
► A teenager chases an 11-year-old boy outdoors and taunts him, kicking him in the rear, and the teen forces the boy back to their orphanage where other teen boys taunt him, telling him he will never find his parents.
► A young boy tells a man that he is leaving and not coming back, the man threatens and mocks him, the boy runs away through the subway, and another boy picks up a guitar and breaks it over the man's head, knocking him out.
► A young boy follows a child street performer home to a filthy abandoned theater, and inside we see trash, dirt, rats, birds, cobwebs, broken stairs, and children wearing dirty clothing; a man appears and yells at the children several times and tells them to go to bed (we see holes in the roof and broken windows as children sleep in the cold, dusty building).
► A man interrupts an orchestra practice by yelling at a boy who is practicing with them, there is an argument between the man and the orchestra leader and the man forces the boy to leave with him; he then threatens the boy with reporting him to authorities as a runaway orphan.
► Two men yell over the phone in several scenes (all of these conversations end up with one man slamming the phone down); after one such call, this man grabs a young boy and pushes him against a wall.
► A father forces his young adult daughter into a limousine taking her away from her boyfriend; they argue briefly and the scene ends as the limo drives away.
► A young woman asks a social worker, "Do you have any children?" the man looks sad and answers, "I did," implying that they died. A dying man confesses to his daughter that he lied about her baby being dead, and she yells at him and the scene ends.
► A young boy stows away in the back of a delivery truck, he gets out in New York City, wanders through the streets and is nearly struck by cars several times (he is never struck, but we hear screeching tires, car horns sounding, and one driver yells to get out of the way). A young boy runs away from an orphanage and walks down the center line of a two-lane highway and the scene ends.

DISCUSSION TOPICS - Duty, relationships, telling the truth, love, loss, reconciliation, families, orphans, the welfare of children, death of a child, death of a parent, homelessness, the importance of music.

MESSAGE - Music is a familiar sound that everyone can hear if they listen. 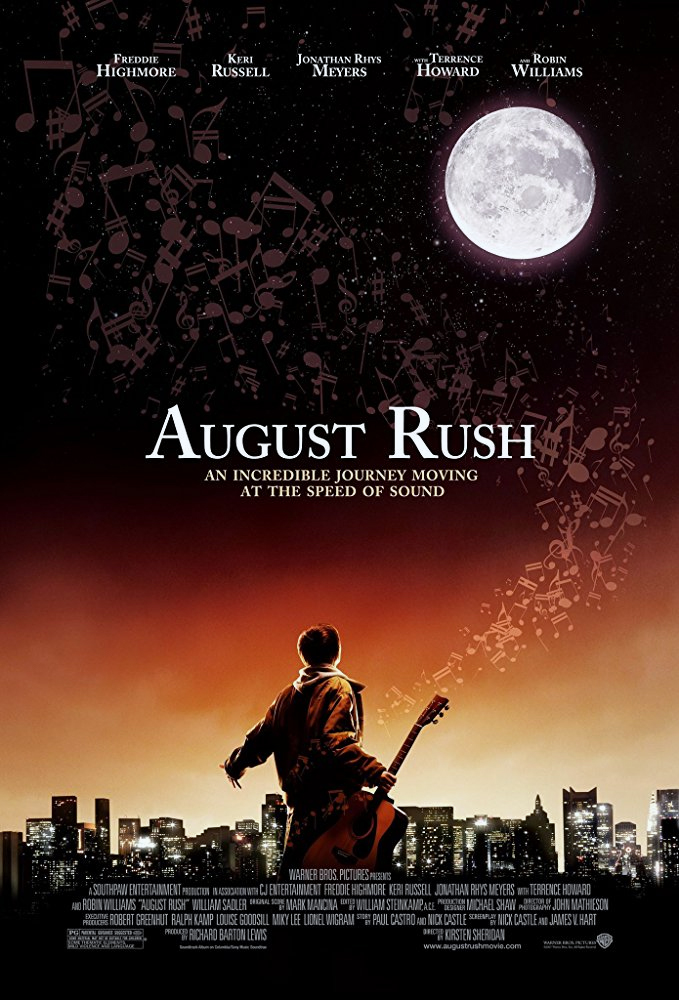