Why is “The Art of Self-Defense” rated R? The MPAA rating has been assigned for “violence, sexual content, graphic nudity and language.” The Kids-In-Mind.com evaluation includes a masturbation scene and a reference to masturbation along with many references to male superiority over women and photos of bare breasts and full frontal male nudity; a death by gunshot, a suicide by hanging, many scenes of fights using karate moves with some ending in bloody injuries, references to murder by gun and by hand to hand combat, and the death of a dog; and at least 6 F-words. Read our parents’ guide below for details on sexual content, violence & strong language.” After recovering from a brutal attack by bikers that left a timid bookkeeper (Jesse Eisenberg) severely injured and terrified to go out at night, he decides to learn how to defend himself by joining a karate dojo. Initially he gains newfound confidence due to the inspirational Sensei (Alessandro Nivola) and star fellow student (Imogen Poots), but soon discovers that the dojo hides a sinister secret. Also with Steve Terada and Phillip Andre Botello. Directed by Riley Stearns. Several lines of dialogue are spoken in French and German with English subtitles. [Running Time: 1:44]

The Art of Self-Defense SEX/NUDITY 6

– A man looks at a photocopy of a magazine page with several photos of women’s bare breasts and masturbates (we briefly see his shoulder moving rhythmically).
► Several men remove their clothes after a karate class to cool down and all but one are shown wearing their briefs or boxers: one man is completely nude and we see his genitals and buttocks, as well as the chest, abdomen, back and legs of the rest, as they stretch each other out and massage each other. A man’s computer screen has an image of bare breasts on it as he practices speaking German in his office cubicle. A man reads a men’s magazine and we see several pages of photographs of women’s bare breasts (we see these pages and photocopies of these pages several times throughout the movie). Two men in a locker room are shown shirtless and wearing boxer briefs and boxers respectively (bare chests, abdomens, backs and legs are seen) while another man undresses and we see his briefs and bare legs. Several sealed condoms are seen in a desk drawer in an office.
► A man takes another man to a small room where a woman is seated and tells him to cool down with her, “Even though her hands are weaker than a man’s hands,” and the man takes off his jacket (we see his bare chest and abdomen) as he sits on the floor in front of the woman and she massages his shoulders and back; she then takes off her jacket (we see her wearing a sports bra that reveals bare shoulders and back) and she stands in front of him saying, “My turn.”
► After a man punches another man (please see the Violence/Gore category for more details), and he tells the injured man that he “masturbates to the thought of his wife in her bathing suit.” A man and a woman make up a story about another man seated alone in a café and talk about him reading personal ads and make explicit sexually suggestive remarks (they speak in French assuming that he cannot understand them). A man talks about a lot of testosterone in a karate dojo. Men talk about women being weak and men being more capable in several scenes throughout the movie. A man tells another man that his name is “feminine sounding.” Three men in an office break room talk about the sexual positions they prefer.

The Art of Self-Defense VIOLENCE/GORE 7

The Art of Self-Defense LANGUAGE 5

The Art of Self-Defense SUBSTANCE USE

– A packet of white powder is seen in a desk drawer in an office (it could be a drug). A man drinks from a bottle of alcohol in his home.

The Art of Self-Defense DISCUSSION TOPICS

The Art of Self-Defense MESSAGE

– Hyper-masculinity is toxic and can have predictable and ominous consequences. 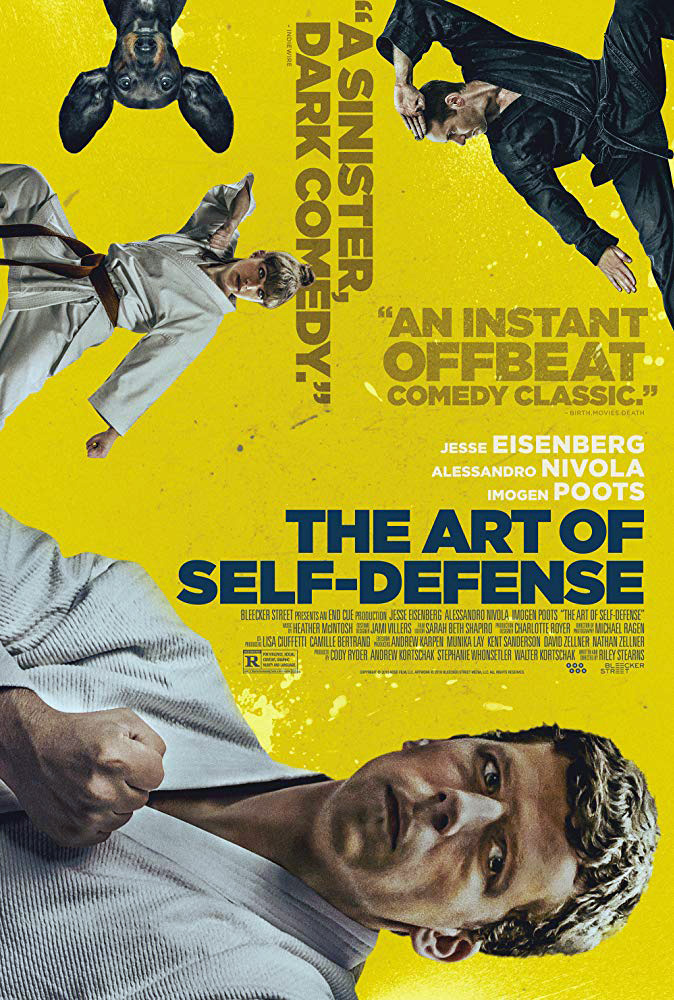